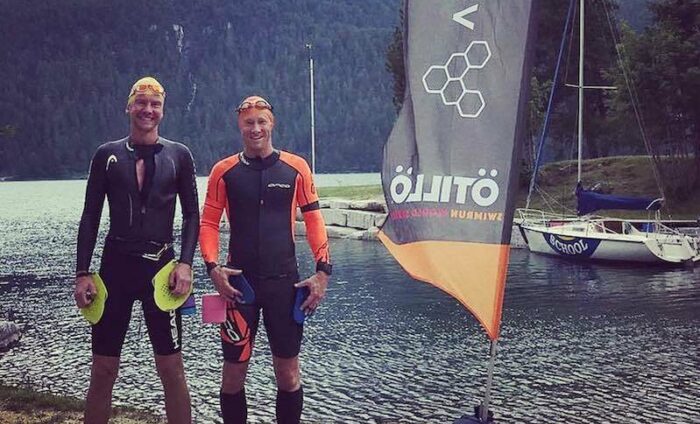 My first experience of a swimrun wetsuit was a good one. I was competing in the tough Engadin ÖTILLÖ SwimRun race and it was important for me to use a specific swimrun wetsuit rather than try and make do with a DIY one from an old triathlon wetsuit. I tend to overheat and often cramp when running so I needed to find a wetsuit that would enable me to keep my core temperature down and not waste too much time transitioning between run-swim and swim-run.

All expectations were met with the Orca Swimrun Core wetsuit. I used it for about two months in the lead-up to the event in order to become accustomed to it. It came with attachable arm warmers which is ideal when conditions are unknown or mixed during the race – you can very easily pull the arms up and down when needed. The upper body is light so very easy to run in and your shoulders do not get tired when swimming long distances. The front zip is useful when transitioning a number of times and the gel pouch a nice touch which kept two TrueStart bars in no problem. The front zipper includes a whistle, which is mandatory kit on swimrun races.

The wetsuit did not rub and cause any discomfort whatsoever in a tough event that lasted about 7.5 hours. The legs showed slight signs of wear and tear but that is probably to be expected when running long distances and swimming using a pull buoy tied to your inside thigh. It seems to be a popular entry level swimrun wetsuit and I would thoroughly recommend it to anyone entering this amazing sport for the first time.
MK

The Head Aero is a more stripped-back suit than the Orca Core. I was worried that over a long distance race its lack of buoyancy compared to the Core might be a problem, but a good sized pullbuoy meant that wasn’t an issue.

The lower part of the Aero is designed for quick running, with flexible material allowing easy movement. The suit comes with three-quarter length legs but I shortened them so I had less drag in the water and also for more comfortable running. The seams are heat sealed so cutting the material didn’t fray it. I found the suit very comfortable for running in with no chafing issues.

The Aero has a base of 2mm neoprene with 1.5mm on the shoulders and arms, in contrast to the Core’s combination of 5mm and 4mm neoprene in the body of the suit. The Aero is marketed as being more suitable for sprint distance races but I found it performed well over long distance, and it was also a popular suit with other competitors. The thin neoprene meant that I didn’t overheat, but the front zip meant I could easily cool down if necessary.

If I race in the Aero in future I will probably slightly shorten the arms to make the top half of the suit easier to remove during a race in case it is hot.

The suit doesn’t have any pockets for nutrition or mandatory kit, which I would have liked to have seen. But it just meant Mark had to carry all our mandatory kit (bandages and map) and I was able to stuff a few gels up my sleeves. Head have a range of swimrun baselayers designed to be worn with their wetsuits that do contain various pockets for kit and nutrition. Like the Core, the Aero has a built-in whistle.
JC

Should safe diving boards be installed at rivers?