The Boulter’s to Bray Swim Trust have just awarded their first grant since becoming a registered charity. The grant of £1,000 was donated to the Langley Academy, to help introduce children to rowing, who otherwise wouldn’t have had the opportunity.

The Boulter’s to Bray Swim can trace its history back to the beginning of the 20th century. ‘The Long Swim’ was a major community sports event in Maidenhead, and was held annually until 1969. The event was re-started in 2012, and has increased in popularity since. Keen to continue the original event’s spirit of community, the organisers registered as a charity with the aim of supporting amateur sports projects in the area.
“It’s really exciting to make this award,” says Trustee Ben Collins. “We love the idea of getting young people introduced to sports which they may not have much opportunity try.  Langley Academy has a great rowing programme, but have been borrowing boats which obviously limits their activity.  They are now able to buy their own boat. We’re delighted to be able to help.”
The Boulter’s to Bray Swim now includes a shorter event, the Boulter’s Mile, which the Trust hopes will encourage more people to get involved. The decision has been well received: “This is a unique swim,” says swimmer Tom Jost. “It’s a community event as much as a sporting event, so if an additional shorter swim means that more people will want to join the community then that’s brilliant.”
The 2.8km Boulter’s to Bray Swim, and the 1.4km Boulter’s Mile (both downstream) take place in Maidenhead, Berks on Saturday 4 July. For details about the swim or the Trust, email contact@boulterstobrayswim.org, visitwww.boulterstobrayswim.org or follow the swim on Twitter @swim_the_thames

How to Stop Your Goggles from Steaming Up 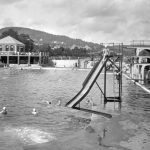 The unseen history of Grange Lido