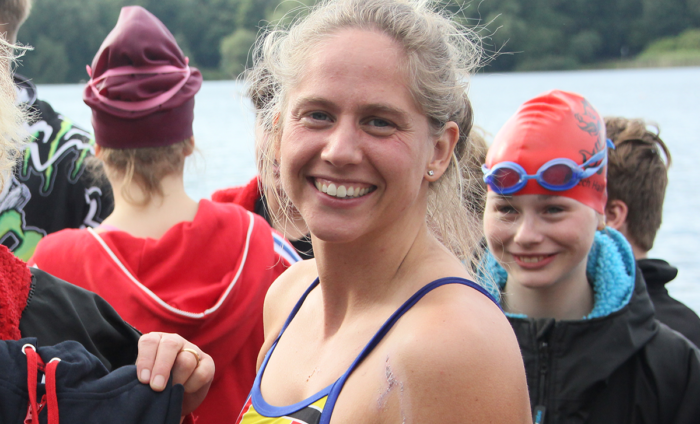 I have so much respect and adoration for the historical figures in English Channel swimming. They have really set a pathway, they’ve created opportunities and inspired the next generation – people like Alison Streeter, who is Queen of the English Channel at 43 crossings. That’s the record I’m going after. She was my idol when I was moving into Channel swimming and she inspired me to keep pushing my boundaries, setting new goals and then setting higher goals. So to play in the field that she’s at, at that level, and to have the opportunity to be a role model to others like she has been, it’s very humbling. I admire her so much.

I feel very connected to England. Some people may feel like I’m taking a British crown, because Alison is British, but I come to England every year, the Channel is my spiritual home. It feels like I’m connected to the Channel. It’s not like the Ashes with someone stealing from someone else. It’s camaraderie, it’s a team thing and we’re creating something special together.

I think sometimes women don’t get recognised for their achievements

as much as they really should be and to have great female role models has been amazing for me. And I really hope I can be that for a lot of women.

When I was a teenager, I had great role models. I had two swim coaches who were amazing and they both helped me to believe in my potential. And I want to be that person for teenagers. I think it’s so special because I know that that’s been a huge part of helping me believe in myself and there’s no way I would be setting big goals for myself unless I had people around me early on to say: ‘You can do this, you can go to the next step’. It’s okay to dream, and to give teenagers permission to dream and to help them believe that they have that potential.

Up until 2017, I trained like a full-time elite athlete. I worked on the side but that was my first, primary and main focus. Since then, I’ve focused more on work/life balance. I don’t feel the need to go under nine or 10 hours for a crossing anymore. But I’m unique in that I have an enormously huge base fitness. So I will be able to knock out a Channel swim in a time where people who are training much more would struggle. I’ve done the Channel so many times and my technique is at such a good level that I’m super efficient. So I would suggest people really work on their stroke. If you can be efficient in the water, then you can drop huge times off your pace.

I’m so amazed at Sarah Thomas’s four-way. I’m actually one of the closest people in the world to actually comprehend how hard it is. 2011 was my first attempt at a triple crossing of the English Channel. And back then it was really pioneering because no one had done a triple crossing since 1990. I got pulled out, and I was put into intensive care in Canterbury. I was suffering from swimming-induced pulmonary edema (SIPE). I retried the triple in 2012 but I was unsuccessful, same condition. I successfully did the triple crossing in 2015 but I was really falling apart in that last lap. When I tried the quadruple crossing in 2017, I was getting the same thing, SIPE. I didn’t even finish the third lap. So I have so much respect for Sarah Thomas and huge kudos to her for what she’s done. But no, not for me anymore. I don’t think any swim’s worth dying for.

Growing up in Australia the English Channel is put on a pedestal. It’s not just a diesel-infused bit of water at the bottom of England, we really respect the Channel. In swimming circles it’s revered. It’s really seen as the most difficult swim in the world. It’s got a very special place in our hearts.

As well as 37 crossings of the English Channel, Chloë’s marathon swimming achievements include the longest ever unassisted ocean swim. She swam 124.4km in the Bahamas in 2014.

Level Water to partner with MARU

Wild Swimming: How to spot a clean river