Simone Ruffini of Italy and Ana Marcela Cunha of Brazil each took gold in the final open water event at the FINA World Championships in Kazan. But only Ruffini left the podium with a successful marriage proposal.

In the men’s race Ruffini finished in 4:53.10.7, just ahead of the USA’s Alex Meyer, who led the race for much of the final lap to finish in 4:53:15.1. Ruffini’s teammate, open water novice Matteo Furlan, who normally competes in the 1500m in the pool and only started training in the open water two years ago, completed the podium to take bronze in 4:54:38.0.
Ruffini’s victory came despite stomach problems in the first half of the race. “I made my race in the last 1km because I swam very poorly in the first 10K as I was fighting stomach problems. I started to feel better around the 17.5km mark and decided that I could attempt a breakaway. I saw the American (Alex Meyer) and the French (Axel Reymond) swimming together and decided to join them. I played for gold with Alex Meyer. In the last 50m, I felt very fresh and I was determined to arrive first.”
And Ruffini didn’t just take the gold medal – he also left the podium engaged to be married, after holding up a note proposing to girlfriend and Italian open water teammate Aurora Ponsele during the medal ceremony.
During the last lap of the race Ruffini and Meyer worked together to secure their podium places. “I’m happy with my finish and proud to get a medal for the USA and to contribute to the team trophy which we also won today,” said Meyer. “I’m also very happy for Simone for proposing to his new fiancée. Perhaps if I had won today he might not have proposed to her, I’m not sure. He and I worked together on the last lap which was very sportsmanlike and professional.”
In the women’s race, Cunha won her seventh world championships medal, taking gold in 5:13.47.3. She was 26 seconds faster than Hungary’s Anna Olasz, who claimed silver in 5:14:13.4.
“I am very happy with this race,” said Cunha. “Four years ago, I won in Shanghai and I’m pleased to win again in Kazan. One year from now, will be the Olympic Games in my country. I am training for 2016 Rio and that means that I am very motivated to swim in a home Olympics. I really love everything about these World Championships”.
Germany’s Angela Maurer took bronze in 5:15:07.6. Maurer celebrated her 40th birthday earlier in the week. “I will enjoy this medal very much because it might be my last world championships.” 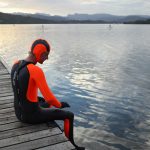 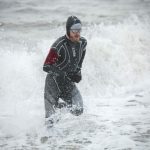 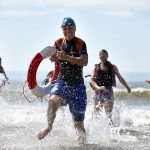