With almost exactly a month until the Rio Olympics, the European Open Water Championships, which took place this week in Hoorn, Holland, was the last opportunity for some of those qualified to notch up a little more racing experience and get the measure of their competitors. Day 1 of the championships kicked off with the 10k marathon swim, the only open water event that’s on the Olympic programme. In windy conditions and with the water temperature barely achieving the FINA minimum of 16 degrees, this was also a test of swimmers’ resilience to the tough conditions they may face in Rio.

In the men’s 10km race, Rio-bound swimmers filled the first five places with home favourite Ferry Weertman edging out Britain’s Jack Burnell in a final sprint. Frenchman Marc Antoine Olivier grabbed the final podium place just 0.4s behind Burnell. Federico Vanelli of Italy and Spyridon Gianniotis of Greece made up the top five with Britain’s Caleb Hughes finishing sixth. Gianniotis led for much of the first half of the race with Olivier taking over for most of the second half. Less than a minute separated the top 25 swimmers after nearly two hours in the water.

The women’s race saw an unprecedented tie for gold between Italy’s Rachele Bruni and France’s Aurelie Muller (the current world champion), who both have tickets for Rio. Third place went to Arianna Bridi, also of Italy, but not going to the Olympics. Olympic qualifier Sharon van Rouwendaal of Holland finished fourth while defending Olympic champion Éva Risztov was disqualified after missing the finishing chute, along with Germany’s Isabelle Härle. Risztov, Rouwendaal and Muller set the pace for the first half of the swim, closely followed by Härle and Italian newcomer Giulia Gabbrielleschi. Rouwendaal moved into the lead with about 500m to go but missed the buoy for the start of the finish tunnel. Going back to go around caused her to drop three places while Rizstov and Harle were disqualified for not returning.

Less than a minute separated the top 25 swimmers after nearly two hours in the water.

Day 2 of the championships was reserved for the 5km swim, which was run in time trial format (i.e. each swimmer is set off separately). The 5km time trial doesn’t feature in the Olympics, which is a shame as it’s an exciting format that allows different athletes to shine. Many of the participants had raced the day before in the 10km but that didn’t prevent some impressively fast times.

In the women’s race, Britain’s Danielle Huskisson took the gold by 8 seconds from Germany’s Finnia Wunram with Sharon van Rouwendaal coming in a further 2 seconds back. While Huskisson herself expressed surprise at her win, it wasn’t totally unexpected. She had performed strongly the day before, finishing eighth, and achieved a qualifying position for Rio at the recent trials in Setubal, Portugal. However, as she finished behind Keri-anne Payne and there was only one spot per country she was unable to take it up.

The men’s race was won by an emphatic 20 second margin by Kirill Abrosimov of Russia, who was clearly not as surprised at his victory as Huskisson. “As a winner in 2012 in Piombino at the European Championships in the 5 and 10 km events, I was not surprised to win today,” he said. Federico Vanelli (Italy) finished second with Caleb Hughes rounding out the podium to make a successful day for team GB.

The team race on Day 3 also takes the form of a 5km time trial with teams of three swimmers, which must include a swimmer of each gender. The British team were unable to replicate their individual successes from the previous day and finished in fourth. Instead, Bruni, collected a second gold medal of the championships alongside teammates Simone Ruffini and Federico Vanelli. Germany finished second despite the absence of two of their strongest swimmers (Härle and Christian Reichert, who both skipped the event to concentrate on their Olympic preparations) with Hungary taking third.

The final day of the championships was for the gruelling 25km race. The women’s field remained tightly bunched with just 10 seconds separating the top five swimmers after nearly five and a half hours in the water and Martina Grimaldi taking the gold. Germany’s Angela Maurer, who turns 41 later this month, showed she can still compete with women half her age with her fifth place finish.

The men’s field was more widely dispersed with Axel Raymond of France nearly 4 minutes ahead of Matteo Furlan of Italy. Edoardo Stochino, also of Italy, finished third, a further 3 minutes back.

Why do we have to keep defending the safety of swimming? 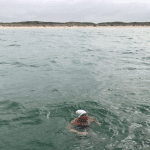