Not content with holding the world record for the longest open water six-man relay in the sea (433.11km in 119hrs 59mins, in case you were wondering), Paramvir Singh is now attempting a new world record: swimming the length of the holy river Ganges. The 2,800km, 35-day adventure started yesterday when the three-man relay team, consisting of Singh, G Narahari and S Srihari, set off from Devprayag.

Swimming the river Ganges will be a “unique experience, which blends the divine providence of adventurism and spiritualism”, said Singh.
Each day the team will swim for 12 hours, each swimmer swimming for one hour at a time. By night they will camp on the riverside. They will swim according to Channel rules: wearing only swimming trunks, one cap and a pair of goggles. The swimmers will be accompanied by six rafts for the duration of the swim.
The team will have to deal with cold water and rapids in the Uttrakhand region; crocodiles, snakes and hyenas; heavy pollution from religious rituals, untreated sewage and factory and chemical effluent; and whirlpools, quicksand and strong currents.
The team of swimmers and rafters are all members of the Indian armed forces and are undertaking the swim to promote Swachh Bharat (Clean India), a nationwide sanitation initiative.

What if I get stung by a weever fish? 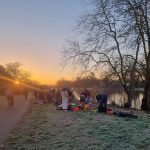 To avoid hypothermia, do sweat the small stuff