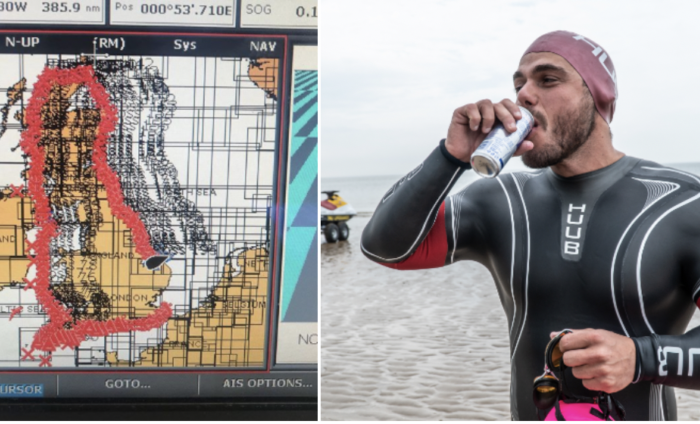 On Sunday 4 November Ross Edgley will finish his epic circumnavigation of the British Isles. Accompanied by more than 300 swimmers, Ross will swim into Margate for a celebratory party after swimming over 2,000 miles. We guess he deserves a beer after swimming up to six hours twice a day for 157 days! Check out our Facebook and Instagram feeds on Sunday morning as we swim in with Ross to celebrate him becoming the first man in history to swim around mainland Great Britain.

The historic 2,000 mile swim, which has pushed Ross to the limits of what’s humanly possible, is expected to end at Margate Harbour at around 7am on Sunday 4 November 2019.

More than 300 swimmers will swim alongside Ross for the final stretch of this incredible journey. This will be a one-mile swim in total for swimmers to celebrate the Great British Swim after more than five gruelling months at sea. The swim, in association with the Outdoor Swimming Society, is now full but it is expected that supporters will throng on Margate beach to cheer in Ross as he reaches land.

The Great British Swim will have taken Ross 157 days to complete. Storm Callum, Storm Ali, hundreds of jellyfish stings and a disintegrating tongue caused by salt water could not stop his efforts and the adventurer will not have set foot on land once during that time.

Ross, 33, of Grantham, Lincs, spoke about maintaining focus in his latest vlog on the Red Bull YouTube channel. He said:

“It’s about finding normality in the abnormal. This isn’t a traditional sporting event. With a marathon, you can grit your teeth knowing you can get through it and you’ll be in your bed with a bubble bath at the end of it. I can’t do that! I’m constantly in the cold water or in my bed which is rocking side to side in the waves – but as long as you make peace with that fact, the Great British Swim becomes possible.”

The finish line in Margate also represents the first time Ross will have set foot on dry land in over five months. In order to get ready for the radical adjustment, Ross has been undertaking daily exercises to ensure his land legs are back in time for the beach.

Ross has broken a number of records since the Great British Swim began. In mid-August he broke the world record for the Longest Staged Sea Swim of 73 days, set by Benoît Lecomte, who swam across the Atlantic Ocean in 1998.

Then in September, he became the first ever Britain to swim from Land’s End to John O’Groats (900 miles) in just 62 days. However, when he lands back on Margate beach, he’ll officially become the first person in history to have swum around the entire coastline of mainland Great Britain.

Not one to shy away from a challenge, Ross has previously rope climbed the equivalent height (8,848m) of Mount Everest inside 24 hours, completed a triathlon with a tree strapped to his back, and done a marathon whilst dragging a Mini Cooper.

Follow Ross’s Great British Swim journey via live tracker at RedBull.co.uk/GreatBritishSwim and tune in to weekly vlogs at youtube.com/redbull.