Australian open water swimmer Sam Sheppard grabbed a record equalling sixth victory in last weekend’s Lorne Pier to Pub, a massively popular 1.2km sea swim about 150km south of Melbourne along the Great Ocean Road.
Now in its 34th year, the Lorne Pier to Pub annually attracts around 5000 swimmers and five times that number of supporters making it one of the biggest open water swimming events in the world (and almost certainly the biggest ocean swim). While relatively short, swimmers have to contend with the surf, and catching the right wave in to the finish can make all the difference to your final position. The event attracts both elite and recreational participants and several illustrious swimmers, including Kieren Perkins and Tammy van Wisse, are past winners.

I love this event and every year I love doing it, trying to win it and beat as many boys as possible

Sheppard’s six titles is equalled only by Naantali Marshall, who won the women’s race six times between 2000 and 2006. His winning spree started in 2010 and was only interrupted in 2012 by Codie Grimsey, brother of English Channel record holder Trent Grimsey.

This year’s conditions were superb, allowing Sheppard to post a record time of 10:02. 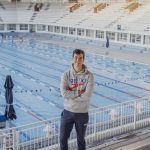