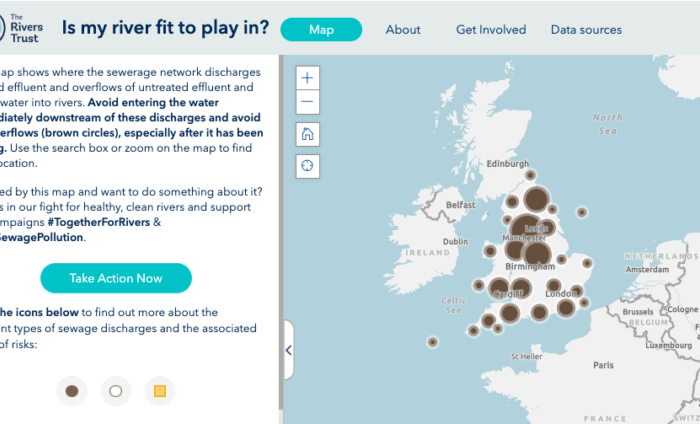 Data released earlier this month by the Environment Agency (EA) shows that storm overflows (SOs) discharged untreated sewage and storm water more than 400,000 times, and for more than 3 million hours during 2020

The Rivers Trust, the umbrella body for the Rivers Trust movement working to protect, promote and enhance our freshwater ecosystems for both people and wildlife, say it is “shocking” the volume of untreated contaminated wastewater reaching our rivers, and that the current approach and infrastructure managing storm water needs a “radical overhaul”.

The environmental charity has since launched a new map showing where the raw sewage overflowed into rivers in England and Wales in 2020.

Michelle Walker, Deputy Technical Director of The Rivers Trust, says: “It’s good to finally see this data in the public domain, and the significant increase in the number of overflows being monitored over the last four years. Despite that, we are a long way from it being understandable and accessible to the general public, so we will be updating The Rivers Trust national sewage map with the new data.

“The 2020 data indicates that, appallingly, almost 1 in 5 overflows across England are discharging more than 60 times per year, a number which is supposed to trigger an EA investigation. This is a staggering statistic and The Rivers Trust is now calling for greater transparency and publication of real-time monitoring of overflows which are discharging more than 20 times per year so the appropriate measures can be taken to improve the situation.”

The Rivers Trust calls for:

Orca wetsuits: Neoprene isn’t recyclable – but can it be sustainable?