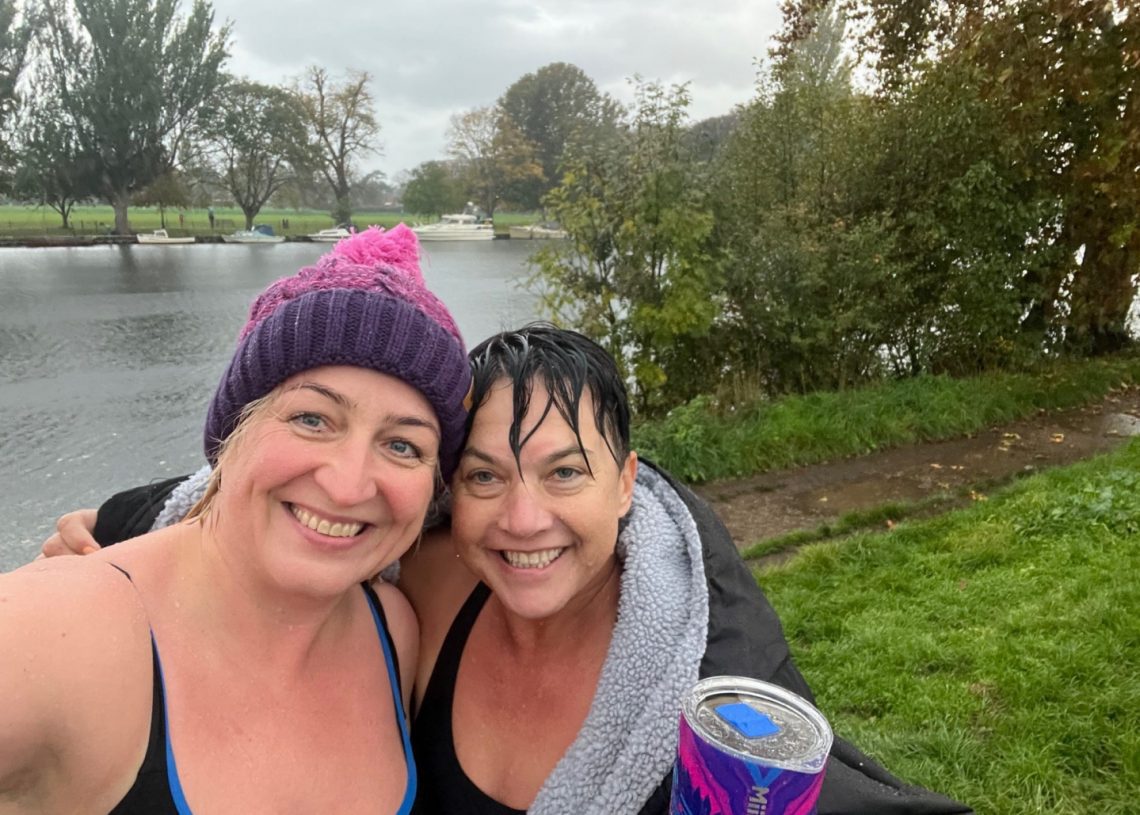 As the WaterAid Swim Marathon wraps up for another year, we talk to two swimmers about the experience and consider the impact their fundraising will have on communities who don’t have access to clean water.

Each year, WaterAid’s Swim Marathon invites participants to swim either a half (13 miles) or full marathon distance (26 miles) over 12 weeks. This year, 292 people took part in the challenge, swimming a combined total of 2,880 miles and raising just over £25,000 for WaterAid.

One of this year’s swimmers, Roisin, chose to complete the distance in London’s lidos and the Hampstead Heath Ponds.

“Swimming has always been something that brings me joy,” said Roisin. “Whether it’s a quick swim in the sea or a longer session in the pool, there’s something special about the freedom and sense of ‘aliveness’ that comes from being in the water.”

Roisin swims to stay fit and to support her mental wellbeing. “Meeting friends for sea swims was a huge mental support during the lockdowns in Ireland, both for the invigorating cold water benefits and the catch ups and craic! But equally, training in the pool and lido has been a great way to keep fit.”

Roisin says there is no comparison between the feeling of an indoor pool swim and swimming in open water. “It’s the sense of calm and freedom that comes with seeing an open horizon while swimming, as well as the fun of joining a community of sea swimmers.”

“Growing up in Poland, I used to swim anywhere. But since I moved to London 21 years ago, I somehow only go to swimming pools. In the past few years, I have had some big changes in my life, and not all good ones, and I have looked for something new. I have re-discovered my love for outdoors in general, but particularly for swimming in open water.”

“I began swimming in the Thames with the Teddington Bluetits in Easter this year. It is a supportive and very welcoming group of people who share a love of water,” she told us.

“I love the cold water feel, being surrounded by nature and the lovely people I meet. Thanks to the group, I entered my first open water event: the 1.5km Henley ‘Club to Pub’ swim. I loved it, and immediately looked for my next challenge. Taking part in the WaterAid Swim Marathon was a no brainer.”

Breaking down the Swim Marathon distance

Roisin and Kasia broke down the distance in their own way. “I found that once I set my mind to completing the half marathon distance, I just jumped into trying to complete 1km every second day,” said Roisin. “I was writing my master’s thesis, so it became part of my study routine and a way to keep up motivation; the swims were a break from screen time.”

“I wanted to challenge myself to do more regular swims, to go for longer distances, and push myself to try new open water places and to face my fear of what lies beneath!” said Kasia.

It was a big step up in terms of distance and endurance for Roisin, too. “Prior to this, I had only really done on/off swimming, apart from completing a triathlon a couple of years ago,” she told us. But it brought such physical and mental benefits, both swimmers felt the challenge was well worth their efforts.

“Swimming is great for both my physical and mental wellbeing,” said Kasia. “I always find that swimming is one of the few times in the day when I can leave everything else behind and be in the moment.”

“Honestly, I loved every swim,” agreed Roisin. “It helped that we had lovely weather in London for the month that I completed the Swim Marathon, so I was super motivated to cycle to the lido for my swims. I guess the biggest challenge was going on days where I felt a bit more tired but it was always worth it. Also the motivation to fundraise was a great accountability factor to keep going.”

The importance of fresh drinking water

Roisin and Kasia were both delighted to be able to support a cause they felt passionate about. “I found the work done by WaterAid particularly impactful given my academic and professional background in climate change,” said Roisin. “Plus, the issues with access to water and clean sanitation are only set to increase in severity as climate breakdown accelerates. I also think the work of WaterAid is at the intersection of climate and human rights issues, something I am super passionate about.”

“The power of water is something special. It helps us live a healthy, happy life in so many ways – not least through swimming,” said Lizzie Griffiths, Senior Events Fundraising Officer at WaterAid. “Swimming can help free our minds and our bodies. It is an activity that anyone, of any age or any ability can enjoy, often in beautiful surroundings. From a gentle lap of a local pool to the chill of an open-air swim, it can satisfy any need or ambition.”

“In the UK, we’re so lucky to have clean, fresh water for both drinking and swimming. But for many around the world that just isn’t the case,” said Lizzie.

Right now there are 771 million people who don’t have clean water close to home. They must rely on far-away water sources, wasting hours every day collecting water that isn’t even safe.

“Together, through our love of the water, we can change that,” said Lizzie. “When a community gets clean water for the first time there’s a tremendous sense of joy and celebration. They know that from now on, there’s a chance for children to get an education, for families to make a decent living, and for the whole community to lift themselves out of poverty. There’s the possibility of a healthier, happier life.”

The impact of the climate crisis

As part of their work, WaterAid supports communities that have been affected by the climate crisis. Families like Cindy (17) and her mother, Remedio (65), who carry water in Shimena, La Gloria, Colombia – a region in the north of the country, bordering Venezuela.

A large part of this area is desert, meaning it is incredibly hot and dry, with very little rain. “The water situation here in Shimena is quite precarious,” Cindy told WaterAid workers, on her daily walk to get water. Cindy is regularly an hour late for school because of the walk, and often arrives tired.

Cindy’s mother, Remedio, has lived in Shimena her whole life, raising her eight children. “Every single day I wake up at 5am to go and get water,” she told WaterAid.

Usually, Remedio walks to the mill, which is a mile from their house. But if the windmill is broken, she has to walk another 3-4 miles to find water elsewhere.

During the wet season, there is plenty of clean water. But in the dry season, when the water levels drop, it gets very dirty. “Animals also use it, so the water turns green. But we don’t have another choice but to use what we can get,” said Remedio.

When Remedio was young, the rainy seasons came on time: a smaller one in March, then the big one in October. “I have seen this change throughout my life and it is very different now,” she said. “We used to have animals here: horses, donkeys, cows. We used to grow crops. But over the years, the crops disappeared because of the lack of rain. Now we are more and more hungry.”

“I no longer walk very far when I need water”

It doesn’t have to be this way, as WaterAid’s work in Milimo Village, Monze District, Zambia, goes to show.

Milimo Village comprises about 22 households with an estimated population of 200 people. They collectively grow vegetables near the borehole, which WaterAid helped to install in 2016. It’s the same water the community uses for irrigation during the dry season, and even in the rainy season as the rainfall becomes more erratic due to climate change.

Ivy Michelo (34) lives in Milimo Village with her husband, Willie, and their four children. In the years before the borehole was installed in the village, Ivy endured many hardships when it came to accessing clean water.

The only sources of water were shallow wells; if you needed clean water from a borehole, she would have to travel approximately two hours to the neighbouring village.

“Bringing water into the house used to take us a lot of time, and we were left with no choice but to constantly use water from the shallow wells,” said Ivy. “The water wasn’t good; it has a smell, it tastes bad and it is not clear. The water caused many illnesses.”

The entire community was involved with installing the new borehole. The men assisted the drillers with labour, collecting stones and sand and bringing them to the construction site; the women cooked food for those working.

“As a community, we no longer worry about water,” said Ivy. “Our children are healthier and go to school. We grow lots of vegetables; some of it we sell to raise income. Life has changed greatly.”

Find out more about WaterAid’s Swim Marathon. If you missed the opportunity to take part in this year’s event, you can still raise money for WaterAid by swimming at other events around the country, including the Great North Swim and the Henley Swim Festival. Swimmers can get involved in supporting WaterAid by signing up to an event on their website by registering their interest in taking on Swim Marathon in 2023, or by taking on their very own swim challenge.

‘How to plan your Swim Marathon challenge’, read our guide to breaking down the distances and making the Swim Marathon fun and achievable.