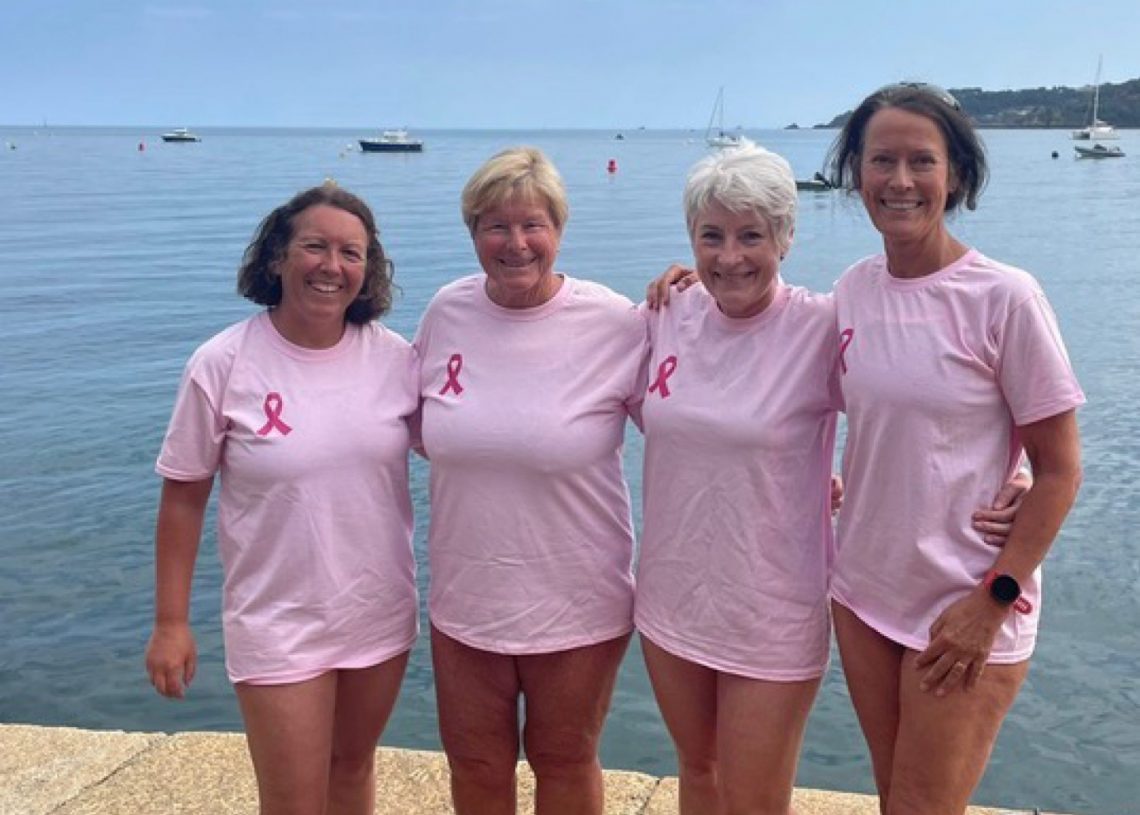 I took up swimming later on in life as I was told by an orthopaedic consultant to give up weight bearing activities or else go for major hip surgery. I have congenital dysplasia of both hips, which was not diagnosed as a child. I still have flare ups with my hips, which I manage with rest and anti-inflammatories. I also have arthritis and I’m a chronic asthmatic.

Swimming has been so helpful to me with all of chronic health conditions. In fact, I’d go so far as to say that resolving to take up swimming has been the best decision of my life.

Over the past few years, I have been able to take my swimming to new levels. I got to know renowned Jersey swimmer Sally Minty-Gravett MBE through Facebook, and she linked me with a team who were looking for a swimmer to join them for the English Channel.

I completed an English Channel relay in July 2017. Although I passed my medical and swim assessment, I was nervous as I did not meet the team until the day of the swim.

Afterwards, Sal encouraged me to come to Jersey where she organised a team of us to swim around Jersey in July 2018. Our group was called ‘The Chosen Ouens’, which is a pun on St Ouens Bay, a lovely long beach on the west coast of Jersey.

The same year, I joined the Coco Channel team and completed a North Channel relay. This was the hardest swim I have ever done, particularly with the constant threat of Lion’s Mane jelly stings. In a team everyone has to work together, no matter what is in the water.

Since then, I have completed the Bosphorus Cross-Continental Swim, which is a route from Asia to Europe, and the 10km London Docklands (Dock2Dock) swim. I also teamed up with the Coco Channel group once again and completed a swim from Catalina to the Californian mainland in July 2019.

My next plan was to join a Jersey to France relay swim in May 2019, in conjunction with Sal’s Swim Camp. Unfortunately the weather was not favourable. Dates and flights were booked for the following year but then COVID struck, which put an end to travel and training.

There were no vacancies for 2021, so we booked a slot in July 2022. Unfortunately, one of our team members was diagnosed with breast cancer and had to go through surgery, chemotherapy and radiotherapy. We were hoping this relay would be a goal for her. She completed her swim assessment but in the end her GP refused her medical. My heart went out to her; there are things in life we have no control of.

Sal organised for two novice swimmers and breast cancer survivors, Anne King and Angela Harvey-Jones to join our team, which was now called ‘Audrey’s Happy Mermaids’. We decided to raise money for breast cancer support in Jersey, for our team member who wasn’t able to join us.

On the morning of the 24 July 2022, the team met up at St. Catherine’s Bay to meet our observer Dee, pilot Vic and to transfer our gear to the club boat. The forecast suggested calm conditions, although no one ever knows with the sea.

Sal was the first person to swim; she swam in very lumpy conditions and then I took over. I enjoyed the rolling seas but found it hard to follow the route as the boat had to be moved in the direction of the wind, towards Les Ecrehous.

We rotated at one hour intervals; Anne and Angela both swam extremely well. At one point, we even had dolphins swimming nearby. We were so excited, we forgot about the swimmer in the water and all reached for our camera phones. Our observer, Dee, gave us great encouragement and helped us to get back onto the boat each time.

In the third hour, conditions totally changed. We had a silky calm sea and perfect visibility to see a large barrel jellyfish. In the ninth hour, now very close to France, conditions changed quickly again. Sal had to endure very tough choppy swimming conditions and lots of jellyfish.

Amazingly, no one got stung. Pilot, Vic, made the call that it was too dangerous for us all to swim to shore. So we decided that Sal would be the one to land our swim. Our Jersey to France relay completed in 9 hours, 4 mins.

On the journey back, we had so much fun. Sal, Dee and I were sitting at the back of the boat and we got soaked through thanks to the speed of the boat and the choppy waters. When we arrived back at Jersey, we were treated to Champagne on ice by the Jersey Long Distance Swimming Club team.

The Jersey to France relay swim is one I will always remember, and I want to say a big thank you to Sal, Jenny and the club for making this swim possible.

Be inspired by more readers’ swims. Read our interview with Sally Minty-Gravett after her ‘textbook’ sixth decade English Channel crossing.