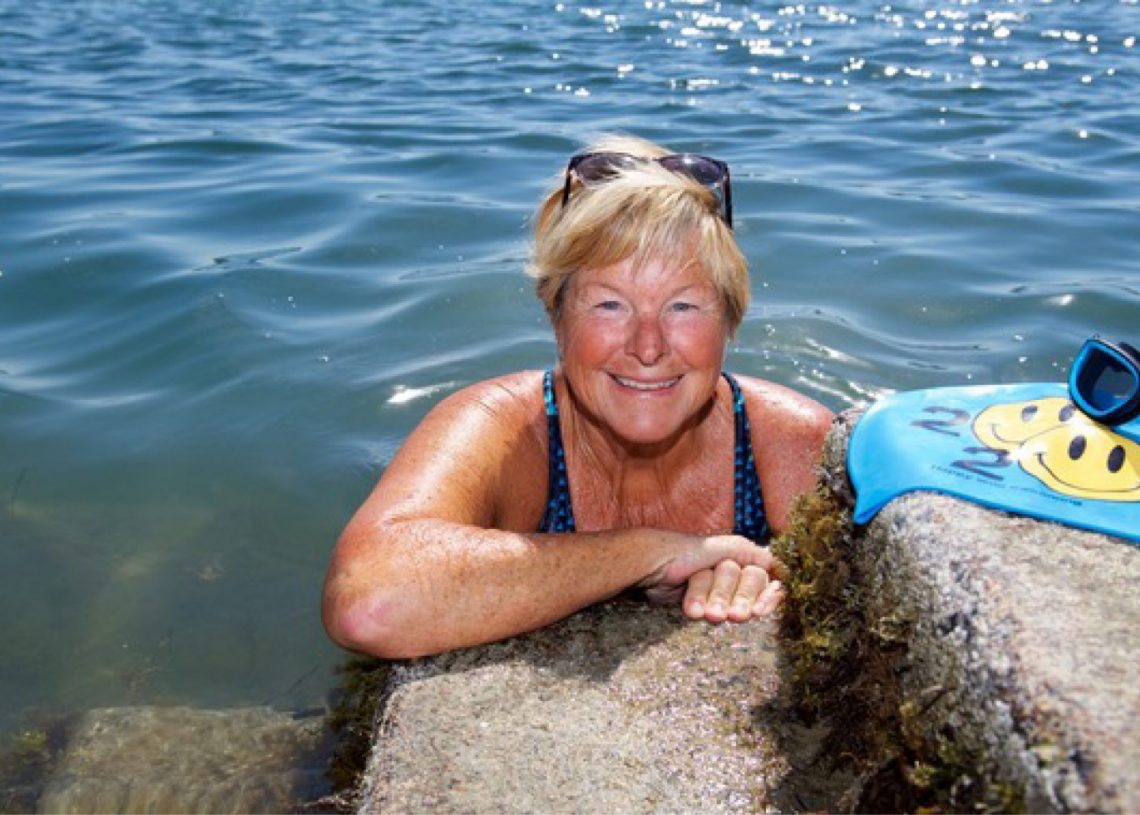 We spoke to Sally Minty-Gravett about her ‘textbook’ sixth decade Channel crossing and the long journey it has taken to get here.

The 65-year-old completed the 21-mile (34km) swim from Shakespeare Beach to Cap Gris Nez in 15 hours and 30 minutes. Sally dedicated her latest crossing to her late husband, Charlie, who passed away in 2020.

Never part of the game plan

Sally first swam the Channel in 1975, aged 18. She never set out to swim the same crossing eight times over six decades. “It was never part of my game plan,” she told us.

Sea swimming has always been a part of Sally’s life. When her parents moved back to the Channel Islands (from the Congo) in 1960, there were no indoor swimming pools in Jersey. So from the age of four, Sally learnt to swim in the sea. By the time she was 10, she was already a competitive swimmer.

She also grew up knowing an iconic piece of Jersey swimming history. In September 1966, 16-year-old Denize Le Pennec swam the Channel from Wissant to Dungeness and became the youngest British female to cross the Channel. She swam breaststroke, from France to England, and completed the swim in 20 hours and 50 minutes, with no hat and no goggles.

“One day, my coach took me to one side and said: ‘Look, why don’t you come and try some [long-distance] sessions.’ So I did; I did a couple of six- and seven-mile swims, and I absolutely fell in love with being in the sea. I never got cold. For me, it was just the natural place to be.”

In 1974, there was a nucleus of swimmers who met in the sea regularly and decided to form the Jersey Long Distance Swimming Club. Sally signed up to swim the length of Lake Windermere, and surprised herself by coming second. “Somebody said to me, ‘you know, if you can do this, you can swim the Channel. A seed was sown.”

She came home, spoke to her coach and her parents, then started to train. In 1975, the centenary year of Captain Matthew Webb’s Channel swim, she swam the Channel for the first time, from England to France, in 11 hours and 57 minutes.

Four more solo crossings – and then a double

After that first Channel swim, Sally began working and travelling. She started living a bit; she had less time for training. It would be another 10 years before she attempted the Channel again.

However, in 1993, French authorities banned people swimming from France to England. You were only allowed to swim as part of a two-way from England.

Sally decided to try for the double in 2005. But once in the water, she started to feel sick and was unwell for the duration. “When I did get to France in 13 and a half hours, my pilot Eddie said to me: ‘you know, you can turn around, we’re in a really good place’. But I just didn’t have anything left in the tank. I had emptied my body of all my reserves.”

Sally now had four decades of Channel swims; it was starting to become a thing. In her fifth decade, she completed another single crossing in 2013, then put her mind to achieving the two-way. She booked for 2014, but it was cancelled due to the weather; the same again in 2015.

“I finished my two-way in September 2016 on the 41st anniversary of my first swim” she told us. However, even before she had completed the double, Sally put a deposit down for her next decade crossing in 2020.

A long journey to the starting line

It has been a long journey to get here. “At the beginning of 2020, before COVID was even a word in our dictionary, I said to Charlie, ‘I’m going to use this as my retirement swim’. We both knew that the oldest lady to swim the Channel was 71. And I quite like being the oldest, you know, doing things. And he said, ‘Whatever you decide. I’m right behind you, and you can always come out of retirement anyway.’”

“Next thing COVID hits. And then Charlie got really, really poorly and I could see that wasn’t going the right way. I quickly postponed my swim to 2021. Then I lost Charlie. Then my niece was given a terminal cancer diagnosis, the day after Charlie died.”

“So emotionally, it was very hard getting to that start line,” Sally said. “The past two years have taken a huge toll on me.”

In the build up to the swim, Sally kept herself away from people; to avoid COVID, but also to avoid any drama. “I’ve tried to keep myself calm, which I haven’t done previously. I’ve normally trained with other people and hyped it all up. I haven’t done that at all this year; I’ve kept it very low key.”

Two weeks before the swim, Sally started checking in with her local (retired) weatherman, a close friend. She asked him if he could look at the weather in Dover and gave him her swim dates. “A few days before I flew to England, he said the weather was looking fantastic. And I went okay, I’m not gonna shout about it because things can change from one day to the next.”

Sally describes her sixth decade Channel crossing as the swim she has dreamt of all her life. “I can’t put my finger on it. From start to finish, it was just the perfect day,” she told us. “The weather was amazing, and there was a low neap tide.”

Sally started her swim from Shakespeare Beach at 5.13am in glorious sunshine. “Starting at Shakespeare Beach was a dream. I wasn’t sick at all, and the tide was in my favour the whole way down. I know all about the tide issue that you get once you near France, which takes you round the corner. I preempted that, and worked hard once I could see what was going on.”

“Then we were out of the tide and ready to go in. Eddie [the pilot] said ‘just follow the boat’. I lifted my head and we were facing the restaurant [La Sirene, near the Cap], which is where I have always dreamt of landing. There are people who meet swimmers on the beach with Champagne. I see the restaurant and I say to my crew, ‘I know where I’m going now.’”

Sally finished in daylight. She walked up the slipway, and was met with Champagne and a hero’s welcome. “I cannot even tell you how perfect it was. Sally also kept some of Charlie’s ashes to put in the Channel. “He was with me all day. Then as we left the restaurant, when I was back on the boat, he went into the sea,” she said.

“It feels like the stars aligned on this particular swim,” she said. “This is going to sound big headed; it’s not meant that way. But I’m blown away with how easy I found this swim, even though I have done the least amount of training because of the emotional burden.”

Thinking back to her first Channel swim, Sally said she found that one relatively easy too. “But that first time, I had trained over 900 miles in a year. Afterwards, I couldn’t move my arms, my neck or my body for three days. So that taught me that I was overtrained. When you get older, you need to train smarter and less. To rest more and eat better.”

And this is exactly what Sal did this year. “I haven’t overcooked it. I have completely undercooked it, to be honest,” she said. “I did a six-hour swim in May, along with plenty of hour-long swims. Then I did a four-hour swim in early June, and after that just kept my shoulders moving. I’ve been really well rested. I’ve eaten well. I haven’t drunk too much. I think that the combination of that, along with a great mindset, has definitely worked in my favour this year.”

To take the pressure off, Sal didn’t let anyone know she was attempting her Channel crossing until she was two hours in. She started an hour later than four or five other boats. By the time she reached the separation zone (near the middle of the Channel), she had overtaken them. “That gave me a huge lift. Not bad for a 65 year old!”

“I can’t even explain how I feel. I think, relief,” she said. “My whole life has been on hold for a long time. I feel like a weight has been lifted off my shoulders and my life is now my own.”

Sally is raising funds for Jersey Lifeboat Association & Dementia Jersey, and you can still donate to her ‘6th decade channel Swim for Charlie’ campaign. For more inspiring long distance swimming stories, head to our news page.