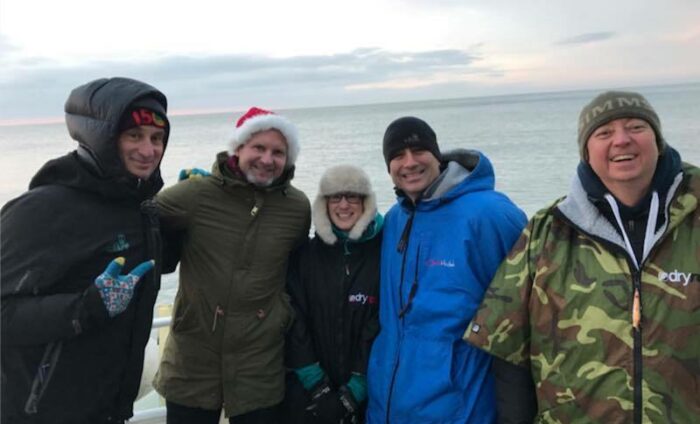 A team from Serpentine Swimming Club have set a new Channel record, raising awareness of plastic pollution. By Alice Gartland

On 2 December 2017, six swimmers from the Serpentine Swimming Club – Kevin Blick, Dani Lobo, Deirdre Ward, Rob Ouldcott, Boris Mavra (Team ‘Cold Turkey’ Captain and brainchild behind the swim) and Mark Johansen – set a new record for the latest English Channel Relay Crossing in the year, in a time of 13 hours and 18 minutes. Their boat was Sea Satin and their pilot Lance Oram accompanied by Mike Oram. The air temperature barely rose above 3 degrees and the water temperature was 11 degrees mid Channel (per the Sandettie reading) and inshore water temperatures a couple of degrees lower.

“Already in the English Channel, one in three fish have plastic in them and by 2050 it’s predicted that the weight of plastic in the ocean will be greater than the weight of fish. This is the greatest threat in history to our oceans and having a huge impact in a relatively short time – it may already be too late… We need to fundamentally change our behaviour and not just recycle plastic, which has its own issues, but eradicate it where we can. The next generation for sure will pay dearly for our mistakes,” explains Kevin Blick.

Eight million tons of plastic is thrown away each year and washed out to sea. It takes centuries to break down and is eaten by marine life, and it’s in our food chain. We are yet to understand the full consequences to our health and planet.

The team are all English Channel soloists. Deirdre has completed a two-way, Dani the Triple Crown, Boris four solos and Kevin three solos. Rob and Mark have completed one solo each…
“It’s fair to say we have cold water experience, but the Channel at 17 degrees in August isn’t the same as it is at 11 in December and we all knew we’d need to train properly and safely,” says Mark.

The team continued swimming for at least an hour through the autumn. “As the temperatures dropped to single digits at the Serps and elsewhere, most of us were doing a mile each time. My coldest mile was 7 degrees.”

The team also focused on speed work as they didn’t want to have to spend too long in the Channel.

Boris selected the toughest two swimmers to go out first, so that if the swim went into the 15-hour plus region they would have a better shot at finishing. He also had to factor in when to swim those of the team with sickness issues and injuries. On that basis, the rotation was Dani followed by Deirdre, Kevin, Mark, Boris and then Rob.

“Being the first swimmer meant that Dani got the colder inshore waters at the start, and he was the only one to do a full third hour. Deirdre was the other swimmer who did third stint, with the final 18 minutes to land the team at Wissant Beach. It was shortly after 9pm and the air and water temperature was very cold by then,” says Mark.

“It was challenging but immense fun,” says Mark. “The main drama was that the drogue rope tangled the propeller, which meant drifting for 10 minutes whilst Boris had to circle the boat”. And their friendship, teamwork, preparations and experience paid off –  their talent perhaps best encapsulated by Rob in this anecdote: “When Deirdre got out after her second hour of swimming, she said, ‘That was lovely, perfect day for a swim.’ And that’s why we call her ‘Wonder Woman’.”

Top 10 tips to reduce plastic use 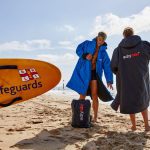