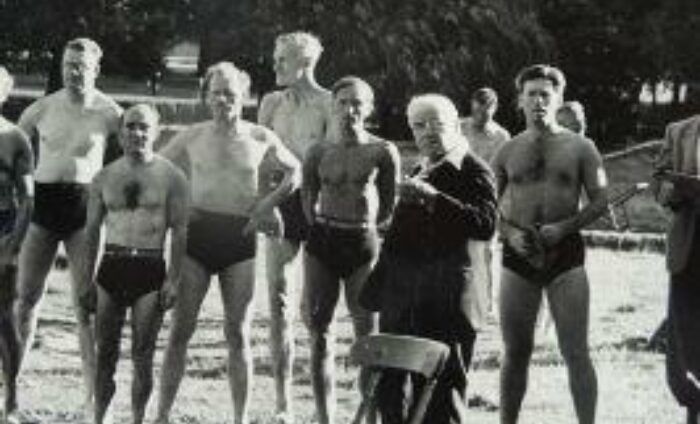 He explained that it was the weekly handicap races that have kept the club going for so many years. He quoted from an article from the American Swimmer in 1923, which was headed ‘Serpentine Swimming Club – an idea worth taking up in America’.
It introduced readers to ‘a continuous and sustained interest of its members, such as I have never seen anywhere else in the world, because it sustains the continued competitive, peculiar and particularly interesting character of its swimming.’ It explained that handicapping has kept its members interested.
‘It has always emphasised and encouraged improvement, rather than sheer ability,’ it concluded. ‘It has maintained an unusual interest in swimming amongst persons of all ages, all classes and all degrees of proficiency.’

The problem with handicapping, is finding people prepared to work out handicaps and deal with the reaction of the swimmers. Human nature being what it is, most will think their handicap is too harsh.

Alan talked of the first handicapper he knew, Clarry Reed, who kept the club going through the Second World War. His handicapping objective was to ensure that the winner was ‘worthy’, which meant having been a member of the club for some time and not having won a race for a while. “Nothing has changed,” quipped Alan.

One member managed to win the Christmas Day race twice. “It was unheard of in Clarry’s reign for somebody to win it twice,” said Alan. “Clarry was most upset!”

One ‘worthy winner’ was Arthur Godfrey, who won the Christmas Day race in 1945, immediately on his return from fighting in Italy. He told Alan that diving into the icy Serpentine was much more frightening than any of the fierce fighting he had encountered in Italy.
On becoming handicapper, Arthur identified several swimmers who were really consistent. He based everybody else’s handicap on how they finished in relation to them, which Alan said worked well.

A wheelchair-bound handicapper introduced computer-based handicapping, adding a percentage based on position. For instance, first place added 10% to the handicap the following week. This also worked well, but sadly, he didn’t last long. His wife didn’t approve of his habit of getting members to wheel him to the end of the diving board and tipping him in for a swim.
Serpentine legend Alan Titmus was at one time president, secretary, treasurer and handicapper. Alan recalls that members had to be careful about criticising their handicap in his hearing. “It got you a really lousy handicap,” he recalls.
Races are currently recorded on video by Mark Fabik, who enters start and finishing times into a database. This then calculates the handicaps for the following week, so swimmers are assured that all handicaps are now entirely objective and mathematical. However, most feel that the ‘worthy winner’ concept still survives – and are quite careful to make sure that Mark isn’t listening before complaining about their start time!
“I am filled with admiration for what the handicappers do,” said Alan. “We owe a great deal to them, as they maintain interest and camaraderie amongst the swimmers.”
He concluded by saying that he knew a member called Sam Youlton, who knew Dicky Ainsworth, one of the original members, forming a 150 year link to the founding of the club. He hoped that somebody in the audience would say at the 200th anniversary that they know Alan Lacy, who knew Sam Norton, who knew Dicky Ainsworth, so establishing a 200 year link.
The club claims to have more Channel swimmers than any other club in the world, including King of the English Channel, Kevin Murphy. However, handicap racing is still at the heart of the club.
“We do not primarily set out to establish champions,” said Norm (‘the shark’) Jones, club president. “Clubs should foster the love of open water swimming in people from all walks of life, regardless of their swimming ability.”
Image shows swimmers preparing for the 1949 Bridge to Bridge swim with Alan Lacy to the right of Clarry Reed (not swimming)