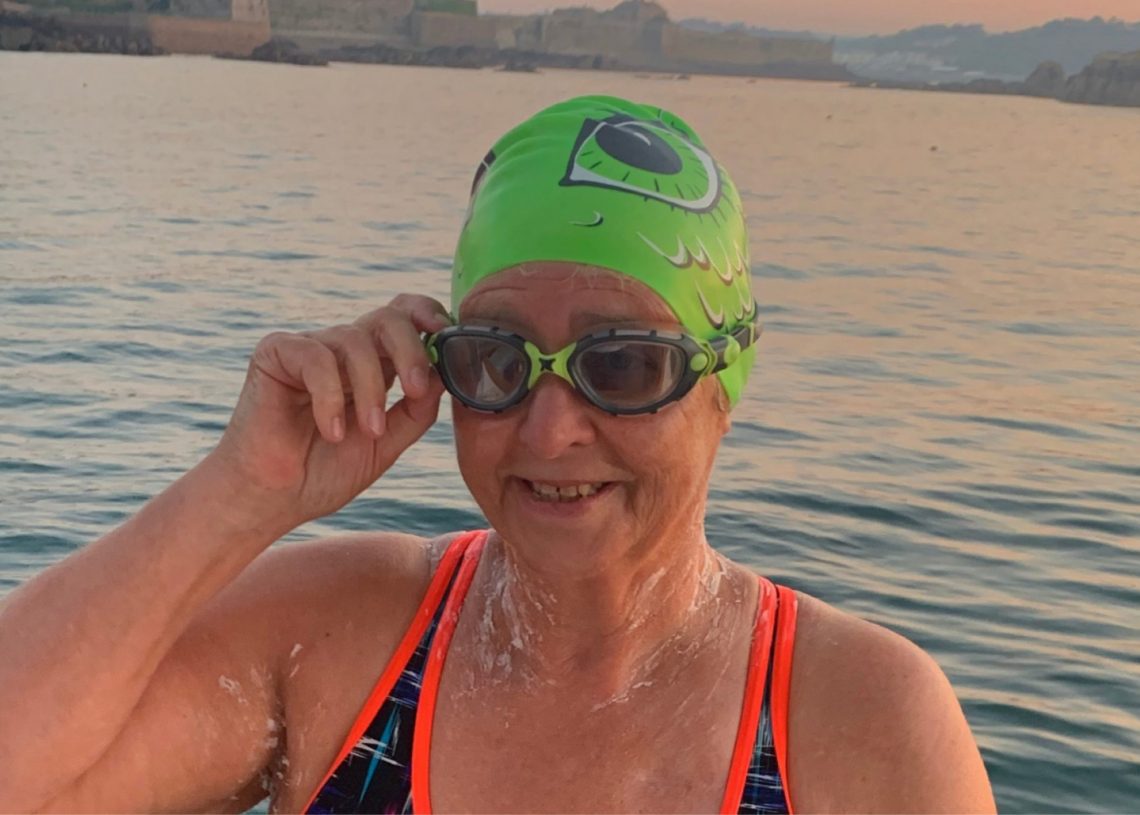 On Saturday 13 August, Chris Pitman became the oldest person to swim solo around Jersey with a time of 11 hours, 32 minutes and 36 seconds.

Starting at 5.56am on Saturday 13 August, Chris swam an anti-clockwise route from Elizabeth Castle and made it back to St Aubin’s Bay at 5.28pm. The distance is approximately 41 miles, with the tide assisting swimmers around the island.

Chris, who lives in Bedhampton, near Havant, only took up long distance swimming when she was 58. In 2010, she swam a one-way of Windermere; and then a two-way the following year.

“[These swims] were preparation to fulfil my childhood ambition of swimming the Channel, which I booked for September 2012 when I was 61,” she told us. Unfortunately, her first solo attempt at the Channel was unsuccessful. “After 15 and a half hours of being tossed around, I was on the boat heading back to Dover.”

Between 2012 and 2019, Chris took part in many relays and record breaking solo swims, including an English Channel relay in 2012 with a team of over 60s called the Swinging Sixties. She completed a three-person relay around Jersey in 2016, followed two days later by a two-person relay from Jersey to France with Heather Massey.

In 2017, she was part of a record breaking swim for the oldest female team to cross the English Channel, with a combined age of 391 years. Then in 2019, she challenged herself to swim solo from Jersey to France, achieving a record for the oldest person to have completed the swim at 68.

Aged 71, Chris decided that a solo swim around Jersey would be her final long distance swim and a fine one to finish on.

A glorious day for a round Jersey swim

On the day, weather conditions were superb. “I couldn’t have asked for a better day,” she told us. “The sun was shining; there was hardly any breeze and the sea was mostly flat. There was some ‘chop’ around the corners, but generally the conditions were kind.”

“Unfortunately, as the years have gone by, I am no longer able to breathe bilaterally without feeling giddy,” she said. “As the swim is anti-clockwise, and I can only now breathe to my right side, I missed all the wonderful sights of Jersey – only seeing my pilot boat and the occasional glimpse of the Island when I fed.”

Unable to orientate herself by sight, she had no idea how long she had been swimming. So she was pleasantly surprised when her crew told her it was her last feed and she was almost back at Elizabeth Castle breakwater.

“I don’t think it has sunk in yet, what I have achieved,” she told us. “My aim was to complete the swim. Setting a new record was the icing on the cake. Not bad for a 71 year old fitted with a pacemaker.”

Chris chose to raise money for Rowans Hospice, and has raised over £700 via her Just Giving page. She would like to express her heartfelt thanks to pilot Matt Clark, observer Dee Richard and crew members Wendy Trehiou and Bekki Kingshott for all their support. For more record breaking swims and event inspiration, head to our news page.

“I may have had cancer, but it isn’t going to rule my life”