This is by no means a definitive list of outdoor swimming books: it is a personal selection confined by the books on my bookshelves. In fact, some of the books on the list don’t even contain any swimming, but they are so immersed in water that they will appeal to anyone who loves swimming outdoors. Let us know what you think should be added, fiction or non-fiction.

It has to be top of any outdoor swimming book list. The siren call of many a swimmer tempted from chlorinated boxes out into the wilds of the open water, Waterlog is a love song to swimming outdoors. Part travelogue, part autobiography, part cultural history of swimming, its exploration of the British Isles from the water has been the inspiration for many wild swimming trips. Like many swimmers I have had multiple copies: the copy I bought myself and the copies that I received as gifts that I then passed on to non-swimmers in the hope that they would be as inspired as I was.

A friend of the late Roger Deakin, Robert MacFarlane has carved a place for himself in British nature writing as a chronicler of landscape and place. Partly inspired by Waterlog and Deakin, his book The Wild Places is an exploration of the wild places of Britain and Ireland, a search to see what remains of the wilderness. It includes swimming in sea caves off Yns Enlli, an island in the LLeyn Peninsula of north Wales; a skin-tingling river swim in the Naver; and a swim in the phosphorescent sea. A beautiful and inspiring book.

The Sea Inside – Philip Hoare

Philip Hoare’s previous book, Leviathan, is something of a companion piece to Moby Dick; a lyrical exploration of his own obsession with whales. Hoare is himself an outdoor swimmer – “Every day I can I swim in the sea. I feel claustrophobic if I am far from water” – and The Sea Inside is an exploration of the sea; part natural history, part autobiography, part travelogue, it is suffused with the year-round swimmer’s intimate love of the water.

Not a novel, but a short story. The Swimmer was the inspiration for Roger Deakin’s watery exploration of the country in Waterlog. From the The Swimmer’s sultry beginning (“The day was long and it seemed as if a long swim might enlarge and celebrate its beauty” is something to which all swimmers can relate), Cheever’s greatest short story soon becomes something else: a journey into one man’s self-ruin.

How to Read Water – Tristan Gooley

Gooley has a pond in his back garden where he swims for most of the year and his love for water and the natural world is apparent in every page of How to Read Water, which provides a wealth of fascinating tips and skills for outdoor swimmers. Learning to read puddles, ripples on lakes and observing the flora and fauna around you can provide a wealth of information about your surroundings so you can better enjoy the landscape. You will never look at a puddle in the same way again.

Books that you have suggested include Haunts of the Black Masseur by Charles Sprawson, a lyrical study of swimming in different cultures; Adam Walker’s account of his Oceans Seven journey, Man vs Sea; the inspirational Swimming to Antarctica by Lynne Cox; Pond Life – A Swimmer’s Journal by Al Alvarez and The Man Who Swam the Amazon by Martin Strel and Matthew Mohlke. Let us know what else should be included.

How do I structure sessions to build pace? 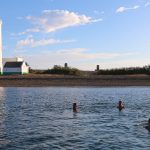