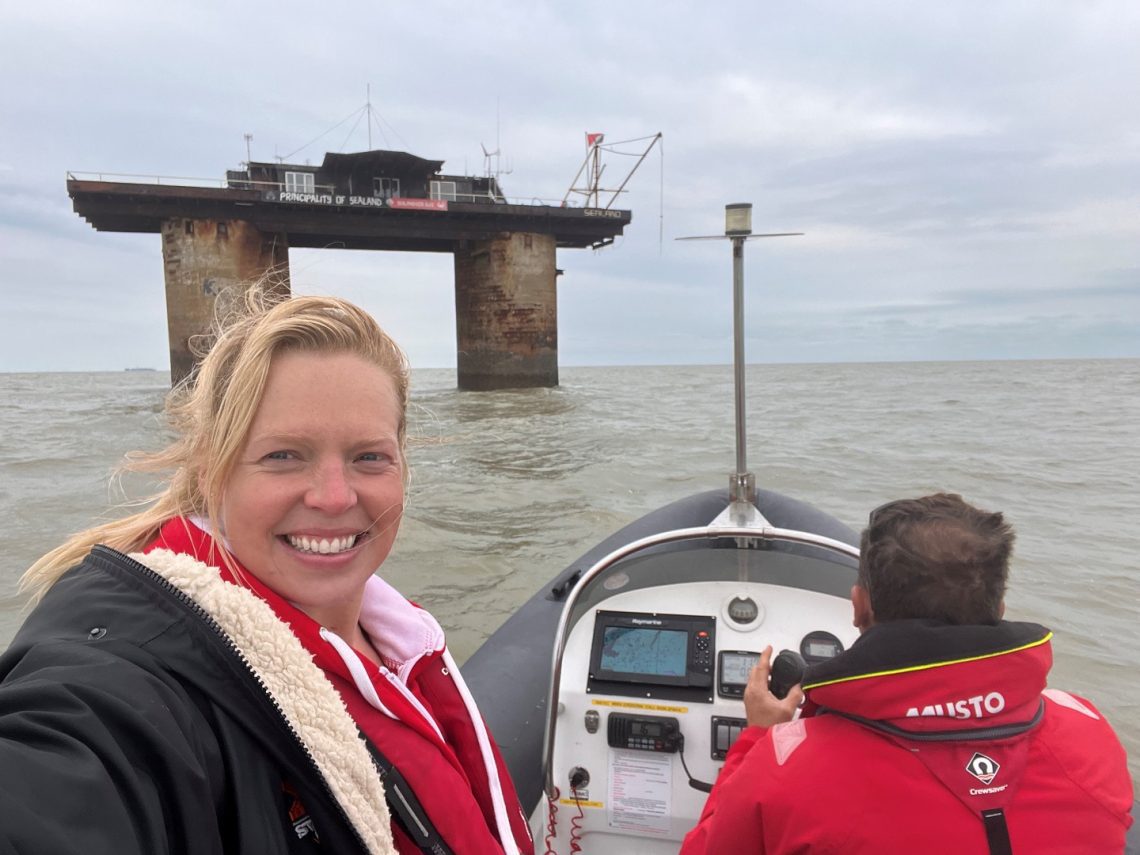 Robyn Carter completed the swim from the North Sea platform of Sealand, setting a new record. The challenge is a 12km sea swim from an offshore platform in the North Sea to the Suffolk Coast organised by the spinal injuries charity Aspire.

At the start of 2021 I was delighted to have been one of the five swimmers selected to complete the rare sea swim ‘Escape from Sealand’. The challenge is a 12km sea swim from an offshore platform in the North Sea to the Suffolk Coast organised by the spinal injuries charity Aspire. The platform was originally built as a sea fort in World War Two and was briefly used as the base for a pirate radio station in the 1960s.

My swim was due to take place on 29 September 2021. However, the day before I got a call to say my swim was cancelled due to adverse weather conditions that didn’t look set to improve. A new date was set for July 2022.

Consequently, at 8:30am on 22 July I set off to the Principality of Sealand along with the amazing Philip Brice (crew) and Jonathan Coone, Chief Instructor East Anglian Sea School. The sea was very bumpy. However, I was assured swimming was ‘doable’ but the conditions were not promising for a fast time.

As soon as I jumped in, I felt great. There was a large swell but it was gentle, and I enjoyed swimming up and over every wave. The pilot said he was impressed with my swimming as I was going at about 2.5 knots.

All was going well until we got to the main channel. A slow-moving container ship was just leaving Felixstowe, and we were asked by the traffic controller to wait for it to pass. The ship was painfully slow! I had to swim in circles to avoid getting cold and it ended up wasting 20 minutes. Luckily, to avoid waiting longer for another ship to pass, the (very nice) controller shifted the next boat to the south to let us get on through the channel. The passing captain also wished us good luck!

It got choppier as I got closer to shore and it was aggressive. The last 3 miles seemed to take a lifetime and I took quite the battering… both by the waves and a jellyfish that stung my forearm (I still have a rash).

I finally made it to shore at Felixstowe Beach under the Spa Pavillion where I was greeted by my beautiful chocolate lab (Jess), my fiancé (Hugo), my mum, my friend Peter who made the swim last year, Iris (the first female to swim Sealand) and Jon who will be taking on the challenge this year.

From jumping in the water, it took 3 hours 28 to get to shore. However, my time swimming the distance was 3 hours 10. I now hold the Sealand record but I am most proud of completing the swim without a wetsuit.

I am also delighted to have raised over £3,000 (inc GiftAid) for the wonderful charity Aspire who support people paralysed by spinal cord injury, helping them to live independently.

My JustGiving link is still open if you would like to donate.

I also did a little reel on Instagram here if you want to see some more pictures.

Diary of a wandering swimmer – Lakes, mountains, poets and a bit of running