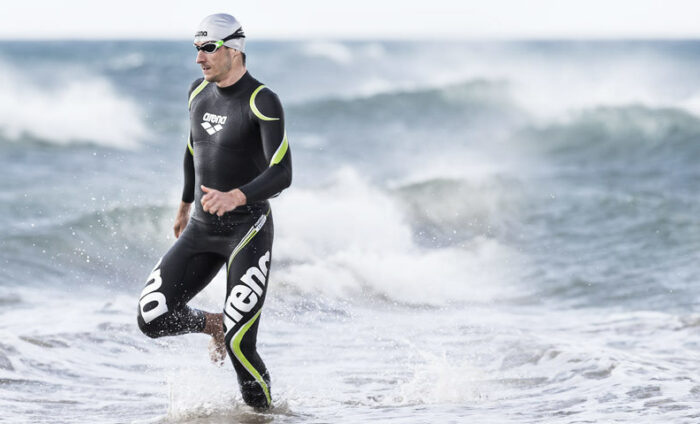 Aquatics brand Arena has launched a new wetsuit that incorporates the Carbon Powerskin technology it originally developed for pool racing and is worn by Adam Peaty. The Powerskin wetsuit, priced at £466, is targeted at the top end of the market and is an addition to the mid-range (£254) suit the company launched a couple of years ago. Additionally, there is a “SAMS” version, where SAMS stands for Shark Attack Mitigation System, which carries a grey and black pattern that research suggests is off-putting to sharks. The SAMS version is slightly more expensive at £508.

We’re hoping to get our hands on one of the new suits shortly for some testing and will be interested to see whether the carbon technology delivers the core support it promises. We have previous tested Arena open water racing suits (they type worn by elite swimmers in FINA non-wetsuit events) and found them to be impressively fast.

While Arena’s roots are in swimming, the marketing for the new suit is targeted at triathletes (it is described as a Triwetsuit) and includes triathlon-friendly features such as a reversed zip, designed for a quick exit but not so helpful if you’re trying to put on the suit on your own. However, we also expect it to be of interest to competitive outdoor swimmers who are looking for maximum performance in races.

The suit is available in men’s and women’s versions and there is also a sleeveless option.

Eight Swimrun Races to Enter in 2016