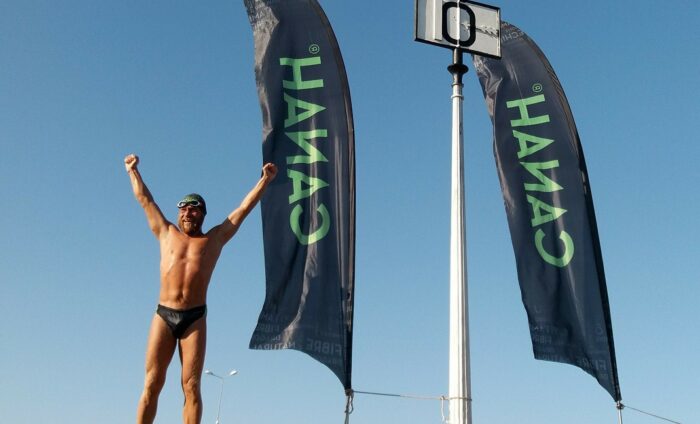 Romanian endurance swimmer, Avram Iancu, has become the first person to swim the length of the Danube without the use of a wetsuit or fins. The 41-year-old set off from Donaueschingen in Germany on 20 June 2017 and finished 89 days later, on 16 September, in the Romanian town of Sulina on the Black Sea. The total distance was 2,860km.

Avram swam an average of 32km per day, peaking at 53km. He crossed ten countries and passed four capital cities (Vienna, Bratislava, Budapest and Belgrade) but the journey was far from smooth. Near the start, he endured water temperatures as low as 14 degrees Celsius and ended up suffering hypothermia. In Serbia, he was held back by a massive storm that brought heavy rain, and in Romania a blanket of fog delayed his progress towards the end of the journey. He had to pass 65 dams along the way, and swam through each of the lakes behind them where the usual current assist from the river dropped to virtually zero. He also had to deal with rapids, large waves and shipping traffic.

“I was very exhausted after such a long period of continuous effort, and had to battle choppy water for the last stretch. I really felt myself fighting with the water to reach the finish line.”

Along the way, Avram was encouraged by onlookers and fans cheering him on at different points. Some offered food, others danced with him and his team on the banks of the Danube, and a few even swam with him at different intervals. Avram cites the public support as providing a real boost to his moral over such a long period.

While the fragile eco-system of the Danube motivated him to start the journey, he believes that the greatest lesson it offered, is about one’s comfort zone:

Our self-imposed limitations are far less than what we imagine

“I am a simple librarian from Petrosani, who wanted to convey a few messages through my swimming. One of them is that we can each push beyond our comfort zone. Our self-imposed limitations are far less than what we imagine.”

On arrival in Sulina, Avram was reunited with his family, and received a warm welcome involving city officials, media and his loyal fans.

Avram was flanked by two kayaks paddling alongside him throughout the swim, and supported by a ground crew. In addition, he has been supported and sponsored throughout his journey by Canah, a European hemp food processor from Romania. Hemp is rich in protein and therefore an ideal recovery food – and in the October issue of Outdoor Swimmer, we’ve got three tasty hemp-based recipes that you can try: hemp seed oil pesto, hemp seed tabbouleh salad and raw hemp protein brownies.

Diary of a wandering swimmer – waterfalls of tea

What nutrition regime should I follow when preparing for my first long distance swim?