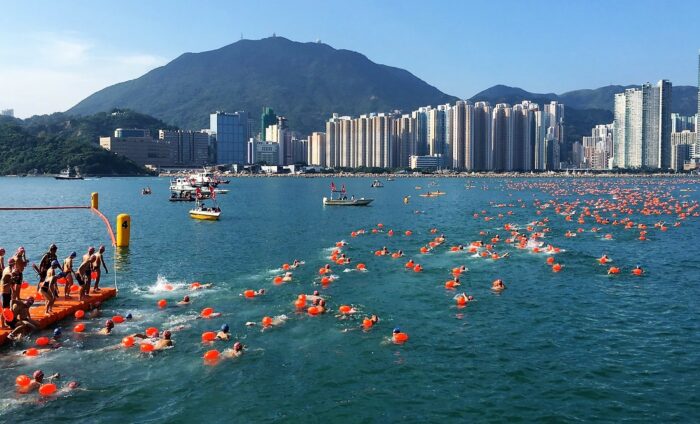 In the early days of triathlon it was common to see elite and recreational athletes taking part in the same races under the same conditions. This no longer happens at sprint and standard distance events now that pack riding and drafting are allowed on the bike but it’s still a feature in Ironman and other long-distance events. To many participants, it’s part of the attraction.

Until recently, there were very few opportunities like this in open water swimming. However, that’s changing with the creation of the FINA Open Water Mass Swimming World Series.

Throughout the year, the world’s top elite open water swimmers compete in a 10k World Cup circuit organised and promoted by FINA, the international governing body for aquatics, and sponsored by Chinese swim manufacturer HOSA. There are usually seven events around the world each year.

Back in 2013 FINA, along with their open water consultant Colin Hill, announced that a series of mass participation events would take place alongside these elite races. Now, in 2017, that series is in full swing. The concept is to run a mass participation swim series alongside the existing FINA/HOSA 10km Marathon Swimming World Cup. These events currently take place in Argentina, Canada (x2), Portugal, China, Abu Dhabi and Hong Kong.

The aims of the new series are to encourage and increase grassroots participation in open water swimming, allow swimming enthusiasts to compete at the same venue as the elites and to raise the profile of the World Cup series.

It has been incredibly rewarding to expand the FINA MSW 10k World Cup, which has the same calibre of athletes taking part, with the addition of these inclusive open water swimming series

The swim distances vary by location and are determined by the local event organiser based on the venue and what is most likely to attract swimmers. They include a 4km down-river swim in Argentina and the 1.8km swim across Hong Kong harbour. The series is also designed to attract children and includes races down to 25m for the youngest.

“Following the successful introduction of Marathon Swimming in the Olympic Games, in Beijing 2008, it has been incredibly rewarding to expand the FINA MSW 10k World Cup, which has the same calibre of athletes taking part, with the addition of these inclusive open water swimming series,” says Hill. “I’ve recently been out to Argentina where the mass participation events were a four-day festival around the elite race. It seemed like all the locals from the town of Viedma were out to support not just the elites but also (so long as they weren’t swimming themselves) everyone taking part in the mass events (which included children’s races, cross river and down river swims).

“I’ve seen the same sort of atmosphere around the world – you should see the huge street party in Lac St Jean (Canada), for example. What makes it so special is that all the swims are linked by the elites performing at the highest level along with the inclusion of open events for anyone. This is an inspirational initiative by FINA and I’m please to say it has been fully embraced by the event organisers around the world. I hope to see more international swimmers, wanting to immerse themselves in the sport to travel to some of these events and experience first hand for themselves.”

Swim for your supper