Lewis Pugh, United Nations Patron of the Oceans, has been confirmed as guest speaker at the World Open Water Swimming Awards at the Low Wood Bay Resort Hotel and Marina at Windermere in the Lake District on Friday 5 February 2016. The Awards are hosted by Chillswim as part of the Big Chill Swim International Winter Swimming World Cup.

Pugh has pioneered more endurance swims in the world’s most vulnerable ecosystems than any other person in history. He swam across the icy waters of the North Pole to highlight the melting of Arctic sea ice and across a glacial lake on Mount Everest to draw attention to the impact of climate change on the Himalayan glaciers. Lewis has swum in the world’s most hostile environments, including the North Cape, the Antarctic, the Cape of Good Hope and the North Pole.
“As an international award ceremony recognising outstanding swimmers from 2014 and 2015, there is no more relevant speaker than ocean advocate and pioneer swimmer, Lewis Pugh,” said Chillswim Director Colin Hill. “His own achievements are remarkable and inspirational.”
The World Open Water Swimming Awards (WOWSA) are presented to four categories: Man, Woman, Performance and Offering of the Year. The awards are unlike any other as they recognise the achievements of both professional and amateur swimmers and the public has the vote. Voting for the 2015 awards closes on 1 January 2016.
All are welcome to attend the awards to hear Lewis Pugh speak and to mix with some of the world’s most inspirational swimmers.
More info and tickets for the awards
Vote for WOWSA Awards 2015

All in the head 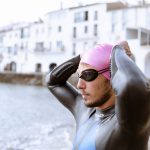