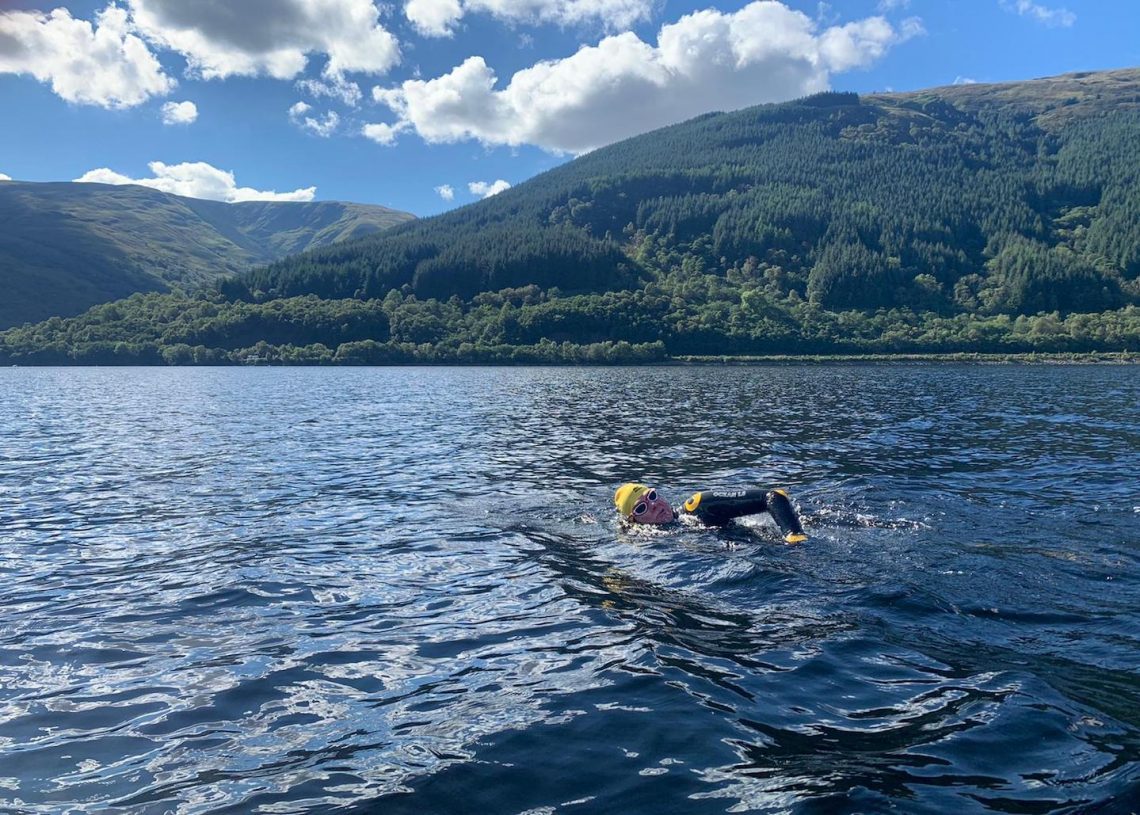 Inspired by his son’s survival of a brain tumour, Scott McQuade has become the first person to swim the length of Loch Lomond both ways.

Everyone on the small beach on the night of 10 September was there with a common purpose, to see Scott McQuade finish his solo two-way swim of Loch Lomond. Since 1959 less than 60 people have managed the one-way swim of the loch (including Scott himself in 2017), so to complete it two ways was set to be a remarkable feat.

“Before I got myself ready I went to the water’s edge and put my hand in,” said Scott. “I wanted to see if I could beat the lady o’ the Loch twice. I said to her, ‘I’m back, so you can either give me flat water or throw everything you’ve got at me, but I will finish this.'”

Not long after midnight, a flashing green light suddenly became visible against the inky black water, getting closer every second. This was the night light attached to Scott’s head. His pilot boat was sliding gently alongside him, words of encouragement voiced from on board. On the beach, spectators shouted, clapped and whistled across the water, willing Scott to the end of what must have been a huge mental challenge.

The swim took 31 hours – longer than the estimated 24-26 hours – but he did it, becoming the first person to complete a two-way solo swim of Loch Lomond. A total of 44 miles (72km).

Finding light in the dark

When asked how he got through it, Scott answered: “I have one thing in my locker that I get out only if I absolutely need to. The memory of my son on a hospital trolley, going into theatre. Not knowing if I would see him again was more than any parent should have to bear.”

Scott and his wife Sharon’s son Ross was diagnosed with a brain tumour in 2017. It was the most difficult thing they had ever faced as a family but Ross was lucky and survived his cancer battle. This cancer scare prompted Scott to want to do something, to take action when faced with a situation you can do little about.

That year Scott completed his one-way swim of Loch Lomond, raising money for The Brain Tumour Charity, which supported the family throughout Ross’s treatment. This year’s two-way swim is supporting the same charity.

“I can never repay what [they] did for us but I wanted to give something back,” Scott told us. Since 2017 Scott has raised over £12,000 for the charity in total.

Recalling his two-way Loch Lomond swim, Scott told us that he was constantly reminding himself that his pain was only temporary, in comparison with families that would never recover from losing their loved ones in this way. This reminder kept his arms moving in the dark during moments when he felt he wasn’t sure he could carry on. But he did.

And so Scott has firmly placed himself in the record books with his Loch Lomond swim ratified by the World Open Water Swim Association (WOWSA). Who knows what challenge he has planned next, but for now he has beaten the lady o’ the Loch. Twice.

What’s coming up in our January issue