New data from Sport England’s Active People Survey (APS) shows an impressive rise over the last 12 months in the number of people swimming outdoors.
The APS is an annual survey that runs from October to September each year with data released in June and December. The newly released data is from the ninth running of this survey which measures participation in sport, of at least moderate intensity, for at least 30 minutes, on at least four days in the last four weeks – the so-called “1×30” indicator.
Sport England says 93,500 people regularly swam in open water over the last year, which was a big jump from the year before when 58,600 did. Moreover, this has been achieved against a backdrop of declining overall participation in swimming.

swimming is still the UK’s most popular participation sport with more than 2.5 million adults swimming each week

Despite that fall, swimming is still the UK’s most popular participation sport with more than 2.5 million adults swimming each week. The rate of decline compared with previous years has also reduced and the Amateur Swimming Association has launched a number of initiatives to encourage people back to the water. In a press release, the ASA also noted that: “17,800 more people from black, Asian and minority ethnic communities have started swimming more regularly.”Unfortunately, the nearly 60% leap in open water swimming is not quite as impressive as it first looks as the previous year had seen a sharp (and perhaps unexpected) decline. On the other hand, 93,500 is the highest participation figure recorded since the APS began (see chart). 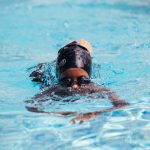