The Great North Swim moved a few hundred metres south this year shifting its location from Low Wood Bay (where it has been since 2008) to the Lake District Visitor Centre at Brockhole. The new venue allowed for additional space for a “swimmers’ village”, offered a new perspective of Windermere and gave participants the opportunity to try out some of the other activities at the visitor centre.

Originally just offering a 1-mile swim, the Great North Swim has evolved over its 11 years to add both longer events (now up to 10km, as 6 laps of the 1-mile course) and shorter ones including a half mile and even a 250m race for youngsters (age 8 and up) and beginners. A Great North Swimrun was added in 2017 and repeated this year over three distances (short, middle and endurance). The two longer races gave participants the opportunity to swim 1.1km directly across the lake as their first swim section. There was also an elite 5km race as part of a new “Great British Open Water Elite Series” with cash prizes. The men’s race was won by Caleb Hughes in 55:32 while Alice Dearing won the women’s event in a time of 55:47.

Taking place over three days starting on a Friday morning (8 June) with the 10km wave, the event continued through until Sunday afternoon when the elites rounded off proceedings. Around 10,000 swimmers were expected to join in over the weekend and this year were blessed with almost continuous sunshine (apart from a couple of brief showers) and water temperatures approaching 20 degrees! A huge contrast to 2017, which saw the final day called off after 24 hours of torrential rain and further storm warnings.

In another change, the organisers this year permitted swimmers to go without wetsuits if the water temperature was above 15 degrees and they used a tow float. A handful of swimmers in each wave took advantage of the new rule.

Overall, it looks like the new venue was a success for Great North Swim and will allow scope for the event to grow further in future years. The only criticism we were aware of was the very stony entry and exit points, which resulted in cuts on a few swimmers’ feet. This was because low rainfall over the previous weeks meant water levels were lower than usual. The situation was later improved by the addition of underwater matting.

As in previous years, there was no access to the site for car drivers except for a limited number of pre-sold priority parking slots. Instead, there was a park and sail service that brought swimmers directly to the visitor centre by boat. 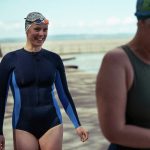