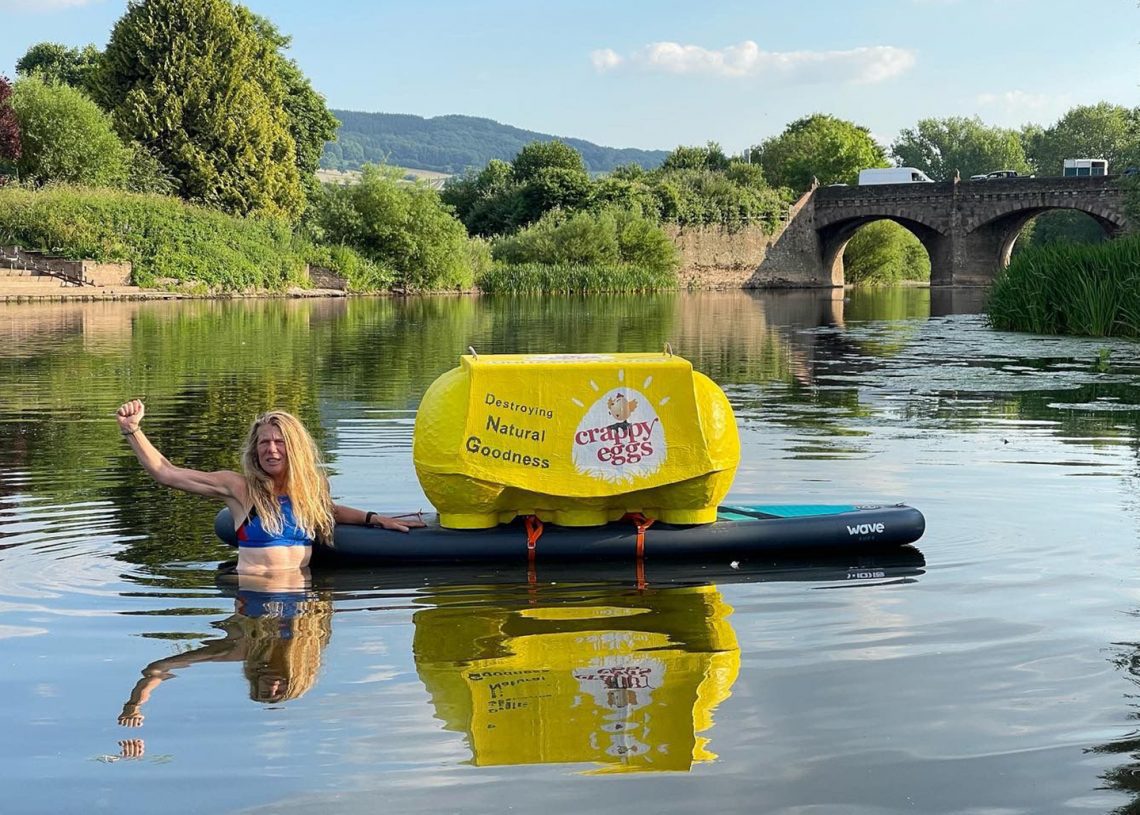 SaveTheWye is hosting numerous events along the river this July to spread a sobering message – that we only have two years before the River Wye passes a point of no return and the whole web of life in the river collapses.

The events, which aim to bring communities together to learn about the crisis from the citizen scientists and volunteer groups that have been monitoring water quality, are an opportunity to celebrate this much-loved river, meet the people involved in the fight to save it and to add your support.

Upcoming events take place in Leominster (Friday 8 July), Hereford (Saturday 9 July), Monmouth (Sunday 10 July) and Hay-on-Wye (Sunday 10 July) and include discussions and debates, workshops and performances, plus a chance to meet the citizen scientists who have been testing water quality and capturing data. There will be a concert at Leominster Priory, a screening of RIVER (written by Robert MacFarlane and narrated by Willem Dafoe, with music by Radiohead), as well as plenty of ways for young people and families to get involved.

Support the river back to health

SaveTheWye, a coalition of local community groups committed to protecting the River Wye – which stretches some 155 miles (250km), rising on Plynlimon in Mid Wales before joining the Severn Estuary near Chepstow – has a devastating message: “in spite of looking beautiful, the river is dying”.

In May 2022, Simon Evans, Chief Executive of the Wye and Usk Foundation, suggested that we only have two years before the River Wye passes a point of no return and the whole web of life in the river collapses.

Tom Tibbits, Chair of Friends of the Upper Wye, explains why now is a critical time to raise awareness about the crisis facing the River Wye: “Over the past five years or so, a massive expansion into Wales by the Herefordshire-based poultry industry has created well over 100 new intensive poultry farms. These establishments import fodder from outside the Wye catchment to feed the millions of additional farmed animals, and the resultant manure is routinely spread on the land as a means of disposal.”

The nutrient imbalance caused by the failure to export the same amount of nutrient from the catchment as is imported, means that the only route out is via the rivers. Recent citizen science work has uncovered clear signs that heavy rainfall events correlate with run-off and raised pollution levels measured in the river and its tributaries.

What’s more, the soils act as a sponge, storing phosphate, which can leach into the river during heavy rain. “The imperative to act now couldn’t be stronger,” says Tom. “Even if we stop

applying phosphate to the soils immediately, some estimates say there is already sufficient stored in the soils for up to ten years’ worth of future crops.”

“This phosphate pollution causes – alongside elevated river temperatures, low flow and sunny weather – damaging algal blooms that smother the wildlife in the river, from the keystone ecological species water crowfoot all the way up the food chain to swans,” says Tom. “These blooms have been occurring high up in the river since 2020, and we have lost over 95% of the water crowfoot in the river in a similar timescale. The river is dying before our eyes.”

It is a powerful and frightening message, and local campaigning groups and activists are finding new ways to help spread the word.

“The nation’s favourite river is dying. For decades, the Wye has been my office, my playground, my love. To not protect it is not an option.”

“We are on a cliff edge with losing our beautiful Wye,” says Angela Jones, wild swim specialist who guides swimmers along the river. “For years, I campaigned and attended meetings but no amount of table talk is bringing change to our Wye. The nation’s favourite river is dying. For decades, the Wye has been my office, my playground, my love. To not protect it is not an option.”

Angela, who shared her passion for the Wye with us recently – telling the story of her five-week journey along the Wye in which she kayaked 100 miles, ran 160 miles and swam 84 miles – recently swam a stretch of the Wye, near Hereford, towing a giant egg box to protest against phosphate pollution in the river.

“Chicken poo has four times the content of phosphate than any other kind of animal manure,” she told us. “This amount of phosphate causes ‘algal blooms’, which suffocate river life. If the River Wye is going to stand a chance of ecological survival, plans need to be implemented immediately to drastically reduce the phosphate-rich poultry manure going into our rivers.”

Come along this weekend

“We hope our events will kickstart a conversation about the perils facing the Wye and galvanise the necessary changes in land use, manure management and sewage treatment facilities that are needed to eliminate excess nutrient pollution entering one the UK’s most iconic rivers,” says Tom.

SaveTheWye is urging people to add their voices to the campaign, by joining one of their upcoming events (8-10 July 2022), spreading the word via social media or by writing to their local MP to demand change. Find out more on their website, Facebook group, Instagram or Twitter.

Angela Jones is an adventure and wild swim specialist who guides swimmers on 1-7km routes along the River Wye. Read more about her passion for the Wye here. Her book, Wild Swimming The River Wye (£17.99) is available to buy on her website.

Power up, power down – recipe 1