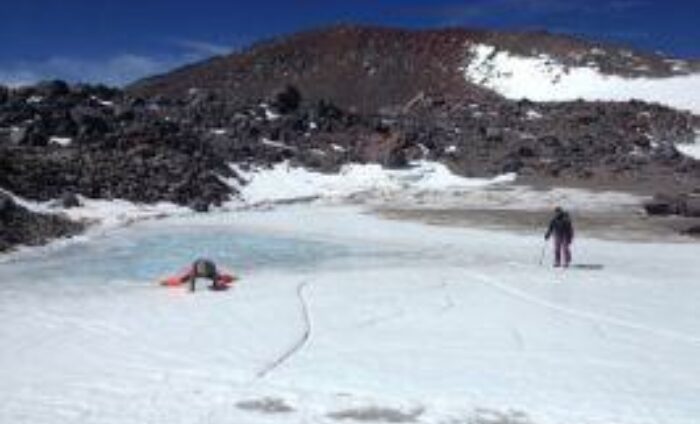 A group of seven swimmers from South Africa is about to set off for Argentina armed with chainsaws. The group, who call themselves “Madswimmers”, along with two medics and four support climbers hope to complete the highest swim in the world on Mt Ojos del Salado in the Andes.

Until recently, the only evidence of the lake the team are heading for was from Google Earth.  Earlier in November a search party from tour leading company Adventure Dynamics International confirmed the existence of the lake, and that the surface was frozen solid.
Reaching the lake will require an eight-day hike starting in the Atacama Desert and climbing a volcano. Altitude sickness and hypothermia are real risks, and that’s before they even attempt the swim. The chainsaws are needed to cut through the ice to open up the lake for swimming!
The current altitude open water swimming record is held by Lewis Pugh following his swim on Mount Everest, at 5.3km above sea level. The lake the Madswimmers are aiming for is 6.4km above sea level. As with Pugh, the Madswimmers will be swimming in accordance with traditional Channel swimming rules.
Madswimmer is a group of South African open water swimmers who swim to raise funds for children, whether it is to put food on tables, support those in health crisis or enable education. The concept started as a bet when Jean Craven won R100,000 from a friend who challenged him to swim across the Gibraltar Strait. Feeling guilty about taking the money, Jean instead donated the cash to charity. Since 2009 the group has raised more than $300,000 for children’s charities.
They are setting off for South America on 20 November. Find out more at www.madswimmer.com

“I’m not ‘ready’ for the first time in years”: life as an extreme swimmer unable to swim