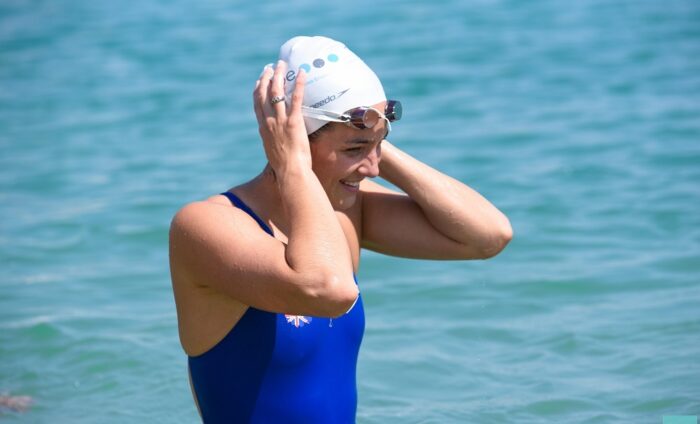 A lot of elite swimmers, when they hang up their costumes and goggles, take a long break away from the water. Years of following a black line up and down the pool, sometimes for two hours twice per day, takes its toll. They lose their love of the sport.

Clearly this isn’t the case for Keri-anne Payne. The open water swimmer who won a silver medal in the 2008 Olympics and has twice been marathon swimming world champion announced last week she was retiring from competitive swimming. Today we received news that she’s just entered another race!

The race in question is the Nevis to St Kitts Cross Channel Swim. It’s a 4km dash between two idyllic Caribbean Islands, now in its 15th year. While it’s a race, there’s also an option to put on a mask and flippers and pause to follow the turtles. At this stage, it’s not clear which option Keri-anne will choose.

One of the reasons that Keri-anne stayed competing at the top level for so long is that she simply loves swimming, a fact she has pointed out several times in interviews. Throughout her competitive swimming career she has made a point of inspiring other people to swim – for example, through working with mass participation event organisers – and she plans to continue doing this through her new venture, Triscape.

As for the swim, you can see why she was tempted: “Nevis is like no other Caribbean Island. The water is so undisturbed and beautiful; it’s a dream to swim in,” she says. “From the moment I stepped onto the island and swam with a sea turtle I knew this was a special place.”

While in Nevis, Keri-anne and her husband, David Carry, will run a Triscape retreat at the Four Seasons Resort, Nevis. “Triscape aims to coach the coaches of the Island to help teach kids how to swim so that in years to come the whole Island can get involved in the Cross Channel swim,” says Keri-anne.

Linford Christie OBE on his new interest in outdoor swimming

Any tips on sighting? Sighting frequency/ navigating in general?