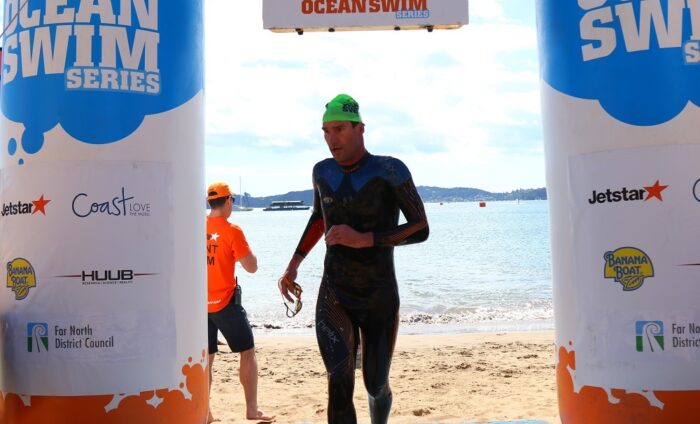 Experience counts, is the clear message from last weekend’s Bay of Islands Classic swim, the penultimate event in the New Zealand Ocean Swim Series, which took place on 18 March in Paihia. At 49 years old, Brent Foster surprised swimmers less than half his age with a tactical victory in a time of 41:04 for the 3.3km race, following a tense final sprint.

Brent is clearly a versatile athlete. In 1986 and 1990 he represented New Zealand in the pool in two Commonwealth Games where he did the 200m freestyle and 200m individual medley. In between those two appearances he was a member of the winning New Zealand team at the World Lifesaving Championships. He also once set the course record for the swim section of the New Zealand Ironman and in 2008 he became the World Aquathlon Champion.

New Zealand Ocean Swim Series Event Director, Scott Rice, says: “It was an amazing win for Brent. At 49 years old he is a very talented athlete and still very fit. It was a tactical win and he used his experience and maturity to push forward in the final seconds.”

The seven-race series, now in its 11th year, frequently attracts some of New Zealand’s top open water swimmers. It also pulls in a large number of recreational swimmers and last weekend a record-breaking 820 people took part.

In the women’s race, Stefannie Gillespie was first back in 44:04, which also placed her seventh overall. This was her second win of the series and puts her in a strong position to secure her the overall women’s title.

“It was a solid swim for Stefannie,” says Rice. “She held her place amongst the male swimmers with a really smart and gutsy swim. She will be looking for a third win at the King of the Bays and is a real contender for the Series win.”

Other distances in the Bay of Islands Classic event included the 300m ‘Give it a Go’ and the 200m Banana Boat OceanKids event.

There is one remaining event left in the 2016/2017 season of the series, the King of the Bays on 8 April in Auckland.

Oxford versus Cambridge – Across the English Channel