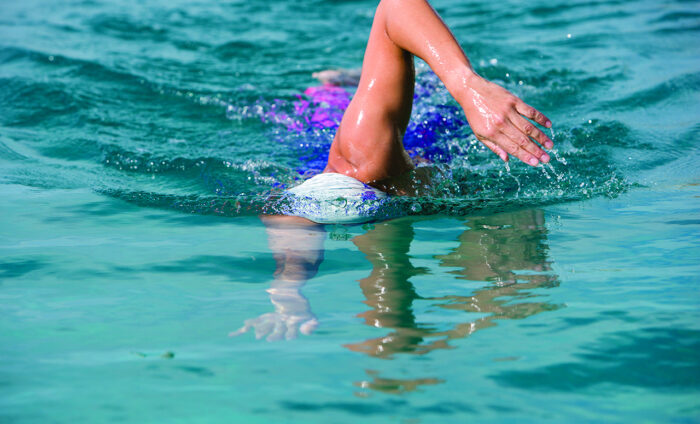 Try to imagine how it would feel to kick a football or ski a downhill run with arms strapped tightly to your sides. Or to swing at a golf or tennis ball tightly wrapped in a brace from waist to knees, reduced to a stiff-armed lunge. If you have experience with any of these sports you know these are notions no one would take seriously.

Now consider the most basic forms of human locomotion: crawling, walking and running. A baby’s first crawl, a casual jog and a world record sprint all have this in common: a ‘contra-lateral’ relationship between upper and lower body.
Whether semi-horizontal as in crawling or fully vertical as in walking and running, one arm and the opposite leg move forward together. As they do, muscles in the core create an integral connection between upper and lower and right and left halves of the body
These examples all illustrate that the body is designed to work as a system, in which all parts cooperate in a complex, synergistic – even elegant – way.
That elegance is displayed in the economy and grace with which ‘movement geniuses’ – from dance to martial arts to sport – perform feats that leave most of us gaping in wonder. They acquire that marvellous ability through practice that, without exception, is devoted to honing a seamless integration of head, torso and limbs. Practising ‘dis-integration’ – such as described in the opening paragraph – is simply unthinkable.
The striking exception to this embrace of the principle of synergy-in-movement is swimming. This begins as a primal and universal instinct but, over time, has evolved into a seldom-questioned belief system. In our first primitive attempts at swimming, each of us churned our limbs heedlessly, as much to avoid sinking as to achieve locomotion. Survival concerns left no room for thoughts of synergy. As we gain the ability to swim farther, achieving integration almost never occurs ‘by accident’. The innate instinct to churn away is too great.
And if you seek formal instruction, it’s almost certain you’ll be taught to kick and pull independently, for instance, gripping the wall or a foam board to work on (or ‘strengthen’) your kick. Finally, if you train for endurance or speed, few workouts do not include sets with a foam buoy tucked between your legs or gripping a kickboard, specifically intended to work the other half of the body in isolation.
Famed Canadian Olympic coach Howard Firby referred to this as ‘arms department/legs department’ thinking (ie., that the upper and lower halves of the body had separate and unrelated roles to perform and should be trained accordingly). It seems that a style of swimming that begins as a hopelessly inefficient survival instinct evolved to become a nearly universal and seldom questioned cornerstone of teaching and training – one that mainly makes inefficiency habitual.
Fortunately, it’s not terribly difficult to learn to be a synergistic swimmer by getting all parts of your body working in harmony. If your primary stroke is front crawl or freestyle, there is an especially large payoff for doing so, because it has more ‘moving parts’ than the other strokes and thus far greater occasion for stroke dis-integration. So here’s a step-by-step guide for a synergistic front crawl.
The fastest way to improve your swimming is by reducing drag, because this does far more to sap your endurance and limit your speed than anything you can do to increase them. Do this by making it your highest priority in each stroke to make your torso – from head to toes – as long, sleek and stable as possible. In other words, think of each freestyle stroke cycle as a streamlined right side alternating with a streamlined left. This is a radical change from limb-churning and is only possible with strong integration of all body parts.

Begin with your head

1. Make sure it’s aligned with your spine at all times, especially when breathing.
2. Keep your head perfectly stable. Any uncontrolled motion in your head will cause instability in your body, leading to uncoordinated ‘steadying’ motions of the arms and legs.
3. In general, visualise your head always moving forward through the water, with no diversions up, down or sideways – and your spine following it.

1. Extend them forward as if following a track directly forward of your shoulder. Track at a slightly downwards angle. Carefully avoid sideways diversions, as these will divert your head and spine sideways.

2. On recovery make each side a mirror image of the other. Asymmetry will cause you to rotate excessively, diverting arms and legs to ‘steadying’ actions, and hurting integration.
3. Press straight back, avoiding ‘S’ strokes, during the propulsive phase.

1. Kick less. Busily-churning legs do more than anything else to disrupt synergy.

2. Focus on keeping your legs within the ‘slipstream’ of your upper body.

2. Control rotation. Rotate ‘off your stomach’ not ‘on your side.’

And finally, to pull it all together… move from your centre

1. Locate your centre of mass (COM): a point two inches below your navel. The body balances and rotates around that point, and all motion should originate there.
2. Be conscious of keeping your COM always moving forward, almost laser-like, even as it rotates side to side.
3. This is the most important point: any time you want to swim faster, move your core faster, not your arms and legs. Rhythm and power should always flow outward from the
centre to the periphery.