Fat is the primary fuel for the aerobic system, which is the predominant energy system during low intensity endurance exercise. It is also stored in abundance in the body, so is almost impossible to deplete.

When exercise intensity increases above the capacity of the aerobic system, the anaerobic system kicks in to make up the short fall in energy required by the working muscles. This system uses carbohydrate heavily as a fuel, of which the body has a limited supply. To be a successful endurance swimmer, both the aerobic and anaerobic systems must be working as efficiently as possible.

Some recent sports science research has shown a ‘train low, race high’ approach to training can increase the body’s ability to utilise fat as a fuel source. This involves training in a fasted stated but racing in a carbohydrate loaded state.

This training method has been shown to cause different stresses on the body compared to training whilst fuelling with carbohydrate, essentially increasing the body’s ability to utilise fat as a fuel source. This is naturally of interest to any endurance athlete as a great fat burning capacity will preserve their precious carbohydrate stores by reducing the contribution from the anaerobic system allowing the athlete to exercise longer before “hitting the wall” and experiencing the catastrophic drop in performance that goes with it.

From a practical perspective, and away from the limitations of scientific study, there is a potential benefit from fasted training, but this has to be very carefully managed as there are a number of negative factors associated with it.

First and foremost, as the anaerobic system relies on carbohydrate to function, any fasted training will significantly limit the intensity that can be achieved and also increase the perceived effort, so high intensity sessions (using predominately the anaerobic system) will be almost impossible.

This will significantly reduce the quality and effectiveness of the training. Fasted training also results in muscle protein breakdown and will impair immune function, leaving an athlete at more risk of illness and infections. 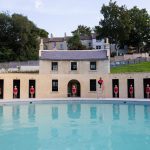 Nine things I learnt on an open water swim clinic

How much do shoes slow you down when you’re swimming?