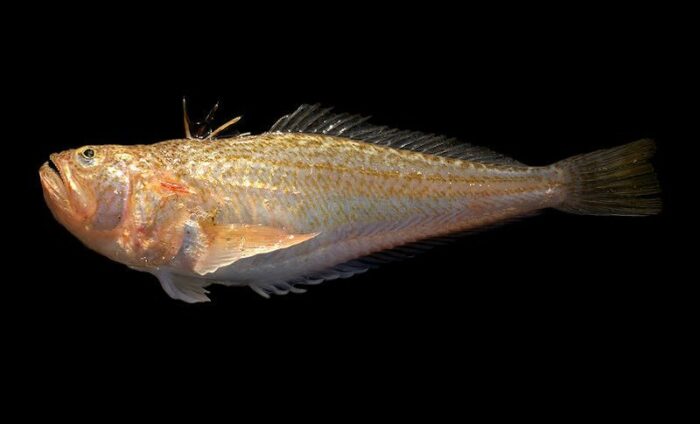 Watch out for the little fish that fell giants. By Susanne Masters

Excruciatingly painful. Getting stung by a lesser weever fish (Echiichthys vipera) isn’t a great start or finish for a swim, though it is an effective defence for a fish that is only about 15cm long. I remember walking into the sea thinking I could feel something sharp and not quite putting my foot down. Within a minute my foot hurt, after swimming I hobbled home, had a day with a curiously numb foot and a few weeks with a mark left on its sole. A friend who surfs said I must have stood on a weever fish but got off lightly by not standing on it properly. They had experienced the full-on sting and crawled out of the sea with their eyeballs rolling.

Lesser weever fish are clumsy swimmers. Capable of short bursts of speed in order to catch crustaceans and small fish to eat they lurk buried in sand with their eyes, mouths and venomous spine-tipped dorsal fin peeking out. Lying at the bottom of a pool seems impossible for the average person, though densely muscled swimmers or those with the breath control of free divers can manage it. Lesser weever fish manage the feat by lacking buoyancy – they do not have a swim bladder and do not float.

Although stings can be painful, most people do not suffer long-term effects

Encounters with lesser weever fish are more likely when walking in and out of the sea, at low tide and during warm weather. In summer time there are more people in the sea, and the fish also move into shallower water as the weather warms up. Although stings can be incredibly painful, most people do not suffer long-term effects, and there is an effective remedy. Because the venom is a protein it is denatured, and rendered inactive, by exposure to heat. Immersing the stung body part in water that is at least 40C, but not hot enough to burn, will bring relief. Rarely a person can have an allergic reaction, or if the tip of the spine breaks off and remains embedded in flesh, get an infection. In both cases medical attention should be sought.

While a swimmer’s focus on lesser weever fish venom is how to get release from the pain of being stung, medical science has a different avenue of inquiry. Lesser weever fish venom is considered to have pharmacological potential. In laboratory conditions the venom has been found to cause the death of human carcinoma cells. This doesn’t translate directly as a cure for cancer. It does add to understanding of biochemical triggers of cell change like programmed cell death, and there is a very low probability that it could become a biotech tool in the treatment of cancer.

WHERE TO WATCH OUT FOR LESSER WEEVER FISH

Lesser weever fish are native to the Eastern Atlantic Ocean as far west as the Azores, as south and north as Morocco to Norway, and in the Mediterranean Sea. Swimming over a sandy seabed you might catch a glimpse of eyes looking out of the sand, or a small dark triangular shape that is the dorsal fin.