Nestled approximately halfway between Rome and Florence, there exists a lake with perhaps the softest of water you could possibly swim in; fed 80% by deep aquifers, the lake – which exceeds 130 metres deep in parts – is a jewel in the realm of anyone who enjoys open water swimming.
The three of us traversed from Capodimonte to the town of Bolsena, a distance of around 12 to 13 kilometres. Setting off at 07:30, we swam past the island of Bisentina and reached Bolsena in four hours and ten minutes. According to correct swimming etiquette when in warm water, the pace was set by the slowest swimmer, so Mark and Kristy did some sightseeing whilst we swam at my pace of about 3kms an hour. We also had some interesting chats during the feeds every hour.
The only challenge was the sunshine, which we had to fend off with Factor 50 sunblock. We were ably escorted in the 24 degree Celsius water by Matteo Fanelli who guided us well whilst we swam. Sergio, his boss, stayed onshore to be ready for any emergencies.
And if you’re interested in firsts we set some records; I was the first Irishman four days short of his birthday to do the swim, Mark was the first Englishman who cycles to work to do the swim one day before his birthday and Kristy was the first Australian swimmer from her street in New South Wales to swim the lake from end to end. Heroes all. A brilliant swim.
John Tierney is on Twitter at: @SwimmingDragons 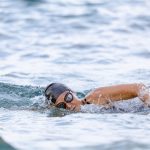 If you want to swim more, swim slower 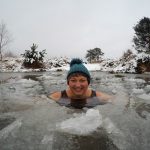 All you need to know about cold water swimming