Parkrun has transformed the world of running. The 5km distance is far enough to challenge potential runners to get started but not so long that it’s intimidating. For more experienced runners, it’s a good distance to test your fitness but not so long that it requires days or weeks to recover, as you might from a marathon. Best of all, it’s free to enter, and it takes place in beautiful parks around the UK and beyond, every Saturday morning at nine. You register once, and can then run whenever and wherever you like. No need to enter or fill in a form: just turn up and run.

So could the concept work for outdoor swimming?

Outdoor swimming is clearly very different to running. Firstly, consider the safety aspects. You don’t need lifeguards watching runners every step of the way in a park. Secondly, running in winter is not as challenging as swimming in winter, which means that an outdoor swimming equivalent of Parkrun will almost certainly have to be seasonal. Thirdly, despite the efforts of one council to charge Parkrun, access to parks is free. Most lakes that are set up for swimming are privately owned or managed and most will want a fee from any potential swim event organiser.

With these obstacles, it will be hard to replicate Parkrun in the water, but NOWCA (the National Open Water Coaching Association, which runs a number of swimming venues) is experimenting with a similar format with its “NOWCA Swim”.

I went along to Thorpe Lake in Surrey one Saturday morning to try it out.

This is the deal. The NOWCA Swim takes place at the end of the regular Saturday morning swimming session at Thorpe Lake. It’s free to enter provided you’re a NOWCA member (membership costs £10 per year) and have a NOWCA wristband. However, if you want to train in the lake beforehand then you have to pay the regular swimming fee. Most people who do the NOWCA Swim add it on to the end of a lake training session rather than just turning up for the event. The distance is 400m and your NOWCA wristband doubles as your timing chip. Your time is sent to you by email shortly after finishing.

So, how does it compare with Parkrun? If you just turn up to do the NOWCA Swim (and you’re already a NOWCA member), then it’s straightforward and free, so that’s a plus.

What about the distance? In my mind, 5km running is equivalent to around 1500m of swimming – it takes me pretty much an identical time to do either. If you’re making the effort to go to a lake and get changed, I’d prefer to do a longer distance than 400m. On the other hand, NOWCA aims to encourage new swimmers: 400m is more accessible than 1500m. In addition, if you’re tacking a NOWCA Swim on to the end of an open water training session, 400m is probably enough. It might be worth experimenting with different distances to see what is the most popular.

Participant numbers are currently low. I have three Parkruns within a two-mile radius of where I live, and they each attract several hundred runners. NOWCA Swim had just a handful, which was nice and informal, but lacked the atmosphere and spread of abilities you get at Parkrun. Hopefully numbers will grow as more people get to know about it. Parkrun also started small. The venues that host regular NOWCA Swims say that a good number of new swimmers have turned up specifically for it, so it sounds like it’s succeeding in introducing people to open water.

Finally, Parkrun is pretty much always at 9am on a Saturday morning. NOWCA Swim is currently offered weekly (during the summer) at 15 venues but each operates its own schedule, with swims taking place on different days and at different times of day. There are good, practical reasons for this. Many lakes have other activities taking place on a Saturday morning and so are not available for the NOWCA Swim. The water also needs to be clear of other swimmers for the event to take place (for safety reasons) and so is best done at either the beginning or the end of a regular session.

As far as we know, NOWCA Swim is the closest anyone has come to recreating Parkrun for outdoor swimmers. Given the differences between the two sports, we won’t ever see an exact replica but the NOWCA Swim is a good start. We hope the concept spreads and grows, and it tempts more people to try open water.

Last hurrah of summer, swimming from Rampion Wind Farm and the Hurly Burly 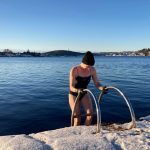 Seasons of change: from sea swims to cold water dips

Is cake the perfect fuel for outdoor swimmers?