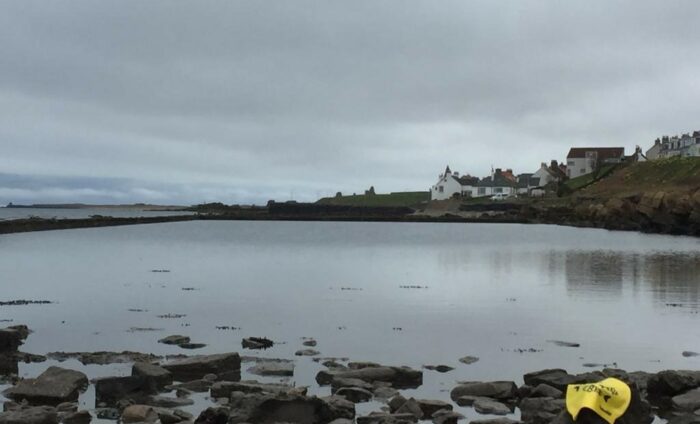 The area I spent these couple of days in was the setting of a dark era in Scottish history: the Great Witch Hunt of Scotland that took place between March and October 1597. The atrocities however lasted until 1736, culminating in the executions of about 2,500 people.

In more recent times this region has a rich fishing history but that has slowly but surely dwindled over the years. Luckily some of the villages along this coast have managed to reinvent themselves with seafood eateries, art and craft galleries, golf courses and walks along the coastal path taking in the quaint harbours echoing the past.

Envious is the word that came into my mind as I was swimming in this sea pool. I was on an annual family pilgrimage in memory of someone lost. Alan might have found it unsurprising for me to swim here but would have had a good old laugh about this Yorkie lass. The weather may not be hot, and the water has a chill to it, but what an opportunity missed to teach children (and adults) how to swim safely outdoors. Built in the 1940s, there was a time when everyone spent summer days by these pools. But they are now mere relics left as a ghostly reminder of some of the best things modern society has decided to forget. Behind the photographer (my number one fan) is a semi-circle of a seating area where people used to enjoy their smokies in the summer sun. For my swim today there were only onlookers with quizzical stares and amazed exclamations at catching someone brave or crazy enough to be swimming. Ok it was only the end of March but still, where has people’s sense of adventure and excitement gone? Abroad I suppose.

On the flip side I did get the place all to myself, which was wonderful given the lane rage I’m sure you’re familiar with at heated pools (as an aside, I am seriously thinking about cancelling my pool pass). Anyway, once I had picked my way over the rocks and slid into the clear water I set off with a pool mentality. Odd that I automatically started to swim like I was in a lane.

I was excited, the water was so clear with some rocks and seaweed to entice sea life. I did one lap there and back, was walking out and realised I just had to go in and do another. How could I not?

To top my weekend off nicely I was lucky enough to get a sunny day and later took to a beach nearby. The village where I was is known for its pottery. This is a pebbly beach overlooked by a public park on a grassy bank, the daffodils were bursting with spring. It was an ideal way to end a weekend in which Scotland has finally woken up from winter.

I was on the East Coast of Scotland in an area known as the East Neuk of Fife. Both of my swims were along the Fife Coastal Path. The sea pool is only a couple of minutes out of St Monans going towards Pittenweem. There is a windmill overlooking the pool which is now used by the Coastguard. If you take care of the slippery rocks getting down to the pool edge and getting in then it is very safe afterwards. Always take care when swimming in cold water.

The next spot was on Crail Beach, which is a little further up the coast from St Monans going towards St Andrews on the A917. Driving either north or south on the M90, take the exit onto the A92 towards Kirkcaldy then the A915 towards Leven. That road takes you all the way to St Andrews (which is always worth a visit) but to get to St Monans go onto the A917 by Upper Largo. The best train station to use is Leuchars, which is still a fair distance away so a car is really the best way. There are buses through these towns from St Andrews, Leuchars and Dundee but you would have to consult local information services for times.

The Fife Coastal Path is well worth a walk, taking in the scenery across the Forth. On a clear day you can see the Isle of May and Bass Rock. You can get boat trips to these islands to see the bird life. Dolphins, porpoises and whales can be spotted in that part of the North Sea as well if you are lucky.

All images thanks to and (c) Caroline Gillwood

Read about Kate's other swims 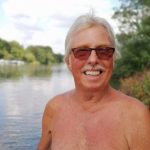 “A swimming challenge in memory of Dad, my hero”