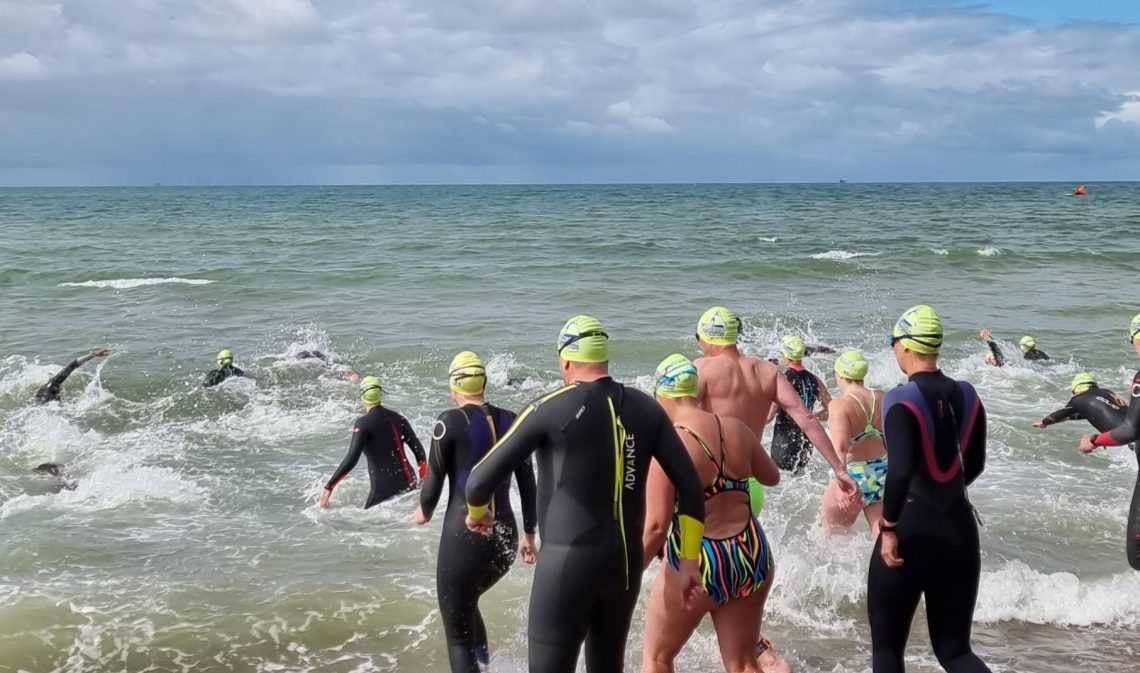 At the beginning of July, I took part in the Brighton Swim Classics, organised by Brighton Triathlon Club. The event offered three distances: 1.5km, 2.5km and 3.8km, with an option to do the “Triple Crown” of all three races, which is of course the one I signed up for.

This was the first time the event could take place since 2019, and only the second time the Triple Crown was offered. The format for 2022 was changed so that each swim followed an “L” shape out-and-back route, starting and finishing at the same place. In 2019, every race was a point-to-point swim, with different starting and finishing points for each.

If you’re familiar with Brighton Beach, you will be aware that the tide generates a fast-moving current that travels west to east on an incoming tide and reverses when the tide changes.

As a swimmer, I liked the point-to-point format of 2019 and especially enjoyed the 3.8k, which faster swimmers completed in a little over 40 minutes due to the powerful current assist (this year’s took more than an hour). I also like the idea of swimming to a destination rather than returning to the starting point. On the other hand, there are advantages with out-and-back swims. Logistically, it’s easier for the organiser to keep all the timing equipment in one place and there is no need to transport participants’ kit from start to finish. Plus, it makes it easier for supporters and spectators.

Out and back again

In 2022, we started with the 3.8km swim in the slack water of low tide. The was a brisk breeze blowing off the sea from the southwest, and 50 to 80cm high waves with chop on top resulting in moderately challenging swimming conditions, especially on the outbound leg against the wind. By the time we reached the turn point, the tide was coming in again giving us current assistance back to the finish point. Swimming became easier and I was six minutes faster on the return than going out.

After a brief rest, we went back to the water for the 2.5km race, and conditions were noticeably tougher. We followed the same out-and-back route but obviously not going as far along the beach as previously. The incoming tide was gathering momentum, making the outbound leg slower and the return even faster. It was another tough but enjoyable swim, but the real drama was still ahead of us.

The forecast had been for the wind to decrease through the morning, but clearly the reverse was happening. In addition, the wave height was increasing, with waves now dumping onto the beach. I’ve seen swims cancelled in better conditions and started wondering if we’d be allowed to continue. The organisers were apparently thinking the same thing and were having lengthy discussions with the safety team.

These decisions are always tricky. There were around 100 swimmers on the beach, mostly keen to do the swim. Some were strong swimmers and would relish the challenge. Others may not have the experience and speed to swim past the breakers and overcome the current. Moreover, the safety team would have been thinking about the capabilities of their team. Would they be able to keep track of the swimmers in rough water and be able to extract them if necessary?

The decision was made to go ahead, and I think the organisers handled the situation well. Before the swim started, they briefed us that conditions were challenging and getting worse. The head of the safety team also spoke and advised people with little experience of sea swimming to consider withdrawing. I suspect they also shortened the course, although this wasn’t announced. I was happy and ready to go. Safety cover was being provided by local beach lifeguards, experienced with the conditions and location, and using a combination of RIBS and surf life-saving boards. I couldn’t imagine being in better hands. I relished the opportunity to race in tough conditions and had full confidence in the safety provision.

The swim was as tough as promised, and I loved it. Starting off, it was as if the waves were trying to throw us back to the beach. We had around 200m to swim perpendicular to the beach before turning right and parallel to the beach. As well as being tossed about by the waves, we were pushed east by the current. Sighting was tricky as I could only see the turn buoy if I was able to look up while on the crest of a wave. After the turn, we had to swim directly into the current, with the waves now striking from the left instead of head-on. It was hard to see from one marker buoy to the next, and I needed to trust I could roughly swim in a straight line. Luckily I did. Things got slightly easier after the 180-degree turn as the current was now in our favour, but the waves kept pounding from the right. I kept telling myself not to fight the sea but to relax, keep my arms moving and roll with the waves. The most fun part came at the end with the final sprint to the beach. Every now and then, a wave would catch my legs and catapult me forwards, eventually dumping me on the beach. I finished tired, battered and exhilarated. I’ve swum in rougher water but this was the first time I’d done a swimming race in such conditions, and I’m grateful to the organisers and safety crew for facilitating a brilliant and memorable experience.

Orca: the apex predator of all the seas

Power up, power down – recipe 2