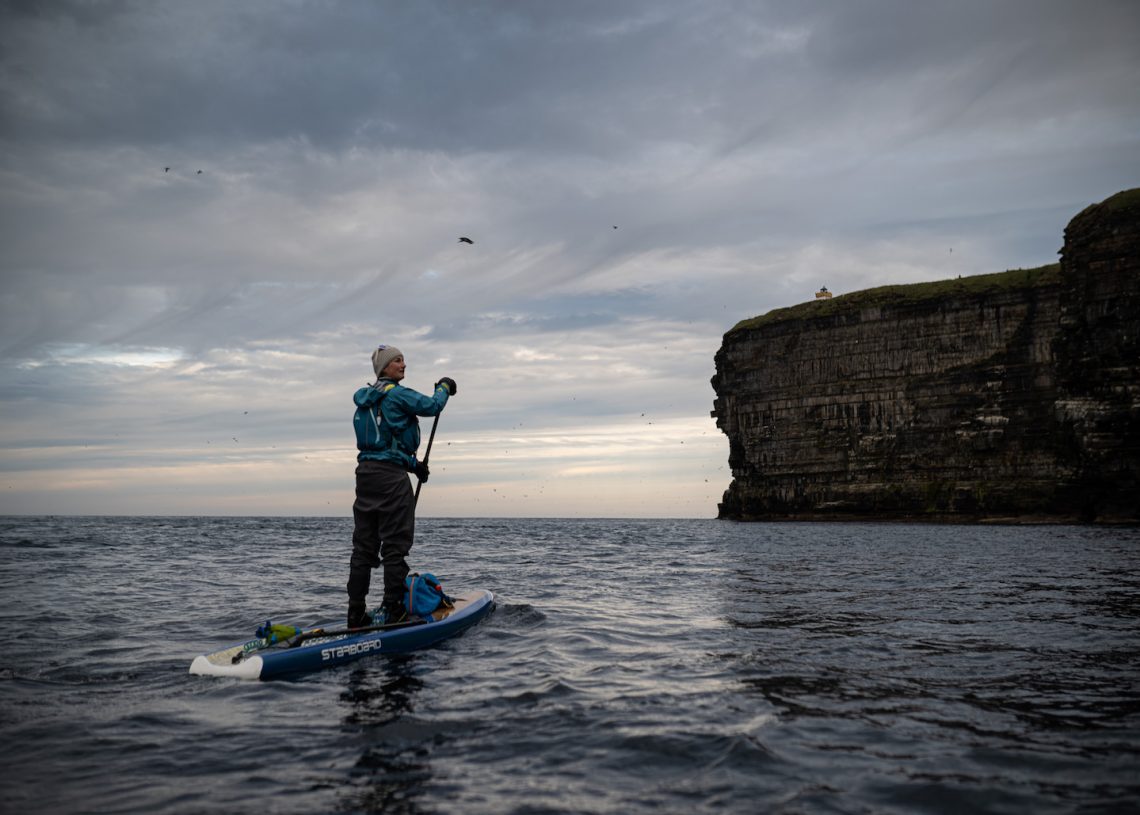 We spoke to marine conservationist Cal Major about the kelp forests around Britain’s coast, and why they need our protection.

Cal Major is a marine conservationist, adventurer and presenter who loves to snorkel around the Scottish coast.

In recent years she has paddle boarded from Land’s End to John O’Groats and around the Scottish coast to raise awareness about conservation of marine species, including kelp – a seaweed we have in abundance around the British coast but is in need of our protection.

We chatted to Cal about her passion for Britain’s kelp forests, and why this “wonder plant” is so important in our marine ecosystems.

Cal, what is kelp and why is it so important?

Kelp is a macro-algae, part of the seaweed family. They’re massive plants with amazing leaves that have air pockets so they can float to the surface. Kelp behaves very much like plants, in that it photosynthesizes. It actually absorbs carbon 20 times faster than terrestrial forests, and produces oxygen for us to breathe. Not only that, kelp forests create a really unique environment for species to live in.

Tell me more about the marine life kelp supports.

Kelp has a holdfast, so it holds on to rocks, which is basically its equivalent of a root. This creates incredible nooks and crannies for tiny little fish and crustaceans. They act as nurseries for fish, safe havens for fish to lay their eggs, where they can develop into juvenile fish.

Kelp is basically a cradle of life for so many species within the ecosystem. It supports anemones, sea urchins, fish, crustaceans, molluscs, all the way up to things like otters which feed on those fish. Seals, which you often see playing kelp, also feeds on the fish. And then that obviously then continues further up the food chain to things like orca, which feed on the seals. So kelp itself is phenomenally important within the marine environment.

Also kelp forms massive plant like structures around the shallow coast, and this helps prevent coastal erosion by absorbing wave energy. So for many reasons kelp is a wonder plant – a super power in the sea.

Oh my goodness, it’s so full of life. Everywhere you look there are fish hiding in different places. It’s a magical place to be in, especially if it’s a sunny day and you get sunbeams coming down through the kelp and refracted in different directions. And it can be a place of real surprise where you bump into things like skate or seals. Kelp forests are one of my favourite places to snorkel without a doubt.

Why do you think so little is spoken about kelp forests, in comparison with terrestrial forests?

We hear all the time about preserving forests with rewilding projects on land. These are trees and ecosystems we can see, touch and walk among. We can understand how biodiversity can flourish among trees and plants on land. And these terrestrial ecosystems are really important. But actually, marine ecosystems are just as if not more important, but because they’re underwater, they’re out of sight, out of mind. So actually helping people understand just how important kelp forests and other marine ecosystems are – not just for people who swim or snorkel in the sea, but for every single one of us on this planet – is vital.

What are conditions like for kelp on the Scottish coast at the moment, and how is it under threat?

One of the biggest kind of threats to kelp is climate change. Kelp has a very specific temperature range within which it can thrive. So with warming seas, one of the concerns is that kelp will be out of its temperature range.

Also, kelp is a shallow water species, so has only a small area around the coast where it can thrive. One of the threats to its habitat is destructive fishing practices, such as bottom trawling and scallop dredging. These are recognized as the most destructive forms of fishing we have in the UK. To combat destructive fishing we need to create highly protected marine areas where human activity is off limits so that species like kelp, but also other fragile bottom-dwelling species, such as maerl and sea grass can thrive. These are really slow growing fragile but incredibly important blue carbon stores. They need the opportunity to thrive once again, because they’ve been absolutely destroyed around the coast of Scotland.

This conservation of kelp is not just for those of us who want to snorkel in it and look at the pretty animals. It is an incredibly important ecosystem, also from a food production point of view. If we protect and improve those ecosystems on the coasts, we’ll have more fish and thriving fishing communities.

So how can we take action in support of kelp conservation?

The first thing we could all do is understand just how important nature is – in this context, marine ecosystems. Not just for those who snorkel or swim, but for all of us on this planet. We need an appreciation of how vital nature is in terms of the climate crisis and the biodiversity crisis, and just in our general philosophy. A lot of this understanding comes from actually spending time in these places and seeing it for ourselves.

The best thing that we can do for the sea is to create these highly protected marine parks where destructive human activity is off limits. And there are several charities and organizations actually calling for that, including the Marine Conservation Society, the Wildlife Trust and Our Seas.

Our Seas is running a campaign and petition called Inshore Limit, looking to re-introduce a three-mile limit, or similar, around the coast to protect it from bottom trawling and dredge-fishing. Campaigns like this will protect these fragile ecosystems, which are literally the cradle of life for the whole of the ocean.

Find out more about Cal Major, her SUP adventures and marine conservation at calmajor.com