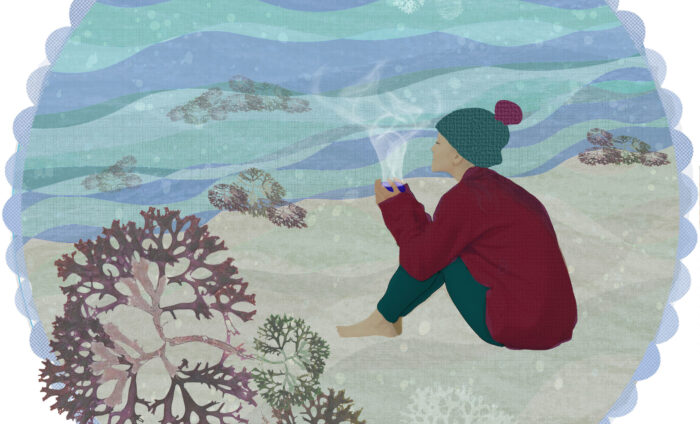 A lifeline for many Irish families escaping the Potato Famine was provided by a small seaweed called Irish moss (Chondrus crispus). After one Irish emigrant recognised Irish moss while sea fishing near Boston he established Irish moss harvesting in Scituate, a coastal town in Massachusetts. It was an economic opportunity that drew around 100 Irish families to live there and work as ‘mossers’ raking Irish moss out of the sea and then drying it for sale. They used small boats with shallow drafts to row out and rake the seabed. It was considered man’s work until during the Depression Mim Flynn became the ‘Irish Mossing Queen’ as she rowed her own boat to work as a mosser while she was only 9 years old. Mossing was an industry that kept growing as demand for products made using carrageenan extracted from Irish moss increased. During World War II, when imports of agar, gum arabica and tragacanth were cut off, carrageenan was used as a replacement, because it could be harvested along the Atlantic seaboard. Mossing also boomed in Canada. Along the shore of Prince Edward Island, Nova Scotia horses were used to pull rakes through the sea’s edge to collect Irish moss.

Today the array of carrageenan products available in shops, from toothpaste to bread, use seaweeds cultivated in Asia as the source of this water soluble polysaccharide that works as an emulsifier, thickener, and gelling agent. For swimmers, a trip to the seashore can easily provide Irish moss for your kitchen cupboard. It is a vegan alternative to gelatine. Traditional remedies use Irish moss as a soothing addition to winter teas when coughs and cold air are harsh on throats.

Irish moss has as many forms of appearance as it does uses. Sea swimmers in clear water will have seen rich purple-chocolate clumps clinging to rocks underwater. Sometimes a blue iridescent gleam flickers on the tips of its fronds. Rockpoolers more often see greenish–yellow forms that tend to inhabit shallow water. Identifying this seaweed that wears so many colours is easier using touch. It has flat fronds, with blunt tips, and an overall texture that is surprisingly tough and robust. Harvesting it is best done with a pair of scissors as picking by hand rips the whole plant off the rock; if you leave the holdfast that attaches Irish moss to rock this seaweed can grow back.

Alongside harvesting seaweed sustainably it is important to monitor environmental factors, which can render seaweed unwise to eat. When rainfall is heavy, sewage treatment companies can and do release untreated sewage into rivers and seas. Under these conditions seaweed can be contaminated with bacteria no one wants in their food. Similarly, while boats shouldn’t discharge toilet water while at harbour, they can discharge wastewater from sinks, showers and washing machines. Even assuming no one dumps their toilet water in a harbour, it isn’t the cleanest place to collect seaweed for consumption.

WHERE TO FIND IT

All around Britain and Ireland seashores.

Swimming and Wildlife by Susanne Masters with illustrations by Alice Goodridge is a monthly feature in Outdoor Swimmer Magazine.

Genius or featherbrained? The Bluetits first ever winter swimming event