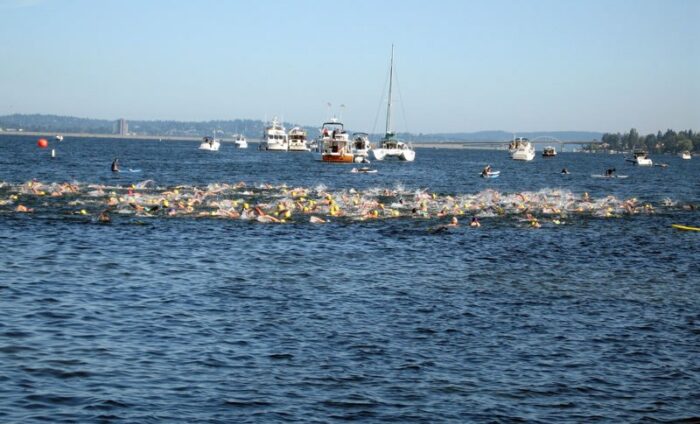 “Where’s the turn buoy?” one of my fellow swimmers asked.  We were treading water, waiting for the start gun at the Emerald City Open Water Swim on Lake Washington.  Anchored boats had floated in front of the first of two orange buoys that marked the turns of the triangular course.  The looming pines of the Northwest framed the boats at the rim of the bay.

“Who knows?” someone else muttered.  Swimmers glanced at each other nervously.  At that moment, the sharp crack of the start gun put an end to all conversation.

In the weeks leading up to the race, I’d noticed an asymmetry in my stroke which was causing me to drift to the left of the pool lane line.  I hadn’t thought much of it, as with a little effort I could ease myself back toward the centre of the lane.  Not a problem, my brain had automatically registered.  You’re good to go.
Now, in the lane-less open water of the bay, my training was being tested.  With the buoy obscured by the boats in the distance, I picked the black speed boat that I believed was the buoy-hiding culprit.  I sighted off its bow as I set off at a solid pace.  My heart thumped with adrenaline as the typical frenzy of flailing limbs filled the water.
My first hint that something was amiss came about five minutes in.  As I settled down into race pace, I realized that the tangle of arms and legs of the race’s start had subsided.  Thinning out nicely, I thought.  Then I looked up at the boat I was using for sighting.  Wait a minute…it was the one with the blue markings on the bow, right?  Or was it the smaller speedboat with the blue canopy?  The orange turn buoy was still nowhere in sight.
That’s when I noticed the steady line of swimmers about fifty metres to my right.  They must have chosen a different line, I thought.  Then the ridiculousness of that proposition hit me—this wasn’t a bike course, where the cyclists could choose different lines through the turns; this was a swim course.  There was only one line to the first turn buoy, and that line was straight as an arrow.  It was at that moment that the turn buoy conveniently emerged from behind a boat, which turned out to be neither of the boats I had been eyeing.  Sure enough, the buoy bobbed off to my right at about two o’clock, directly in line with the path of the other swimmers.
After a hasty course correction and a loss of time, I eventually managed to make my way to the buoy.  The rest of the swim went more smoothly—I made sure to keep my eye on the course by that point!  As the finish line neared, I felt a surge of disappointment to see on the clock that I’d lost about a minute on my time from last year.  33:48 was my final time—not bad for an intermediate swimmer in an open water race, but I’d been hoping to break 30:00 this year.

It was only after I’d munched on the bagels provided by the organizers and allowed my dog to lick my legs clean of lake water that I settled into a pleasant mood.  “What was your time?” a friend asked.  He lined a bagel with a thick layer of cream cheese.  “33:48,” I replied, unashamed.  I wasn’t the first to have been derailed by the challenges of open water racing.  Starting Monday at the pool, I would begin fixing my stroke mechanics so that I might conquer that elusive orange buoy in years to come!