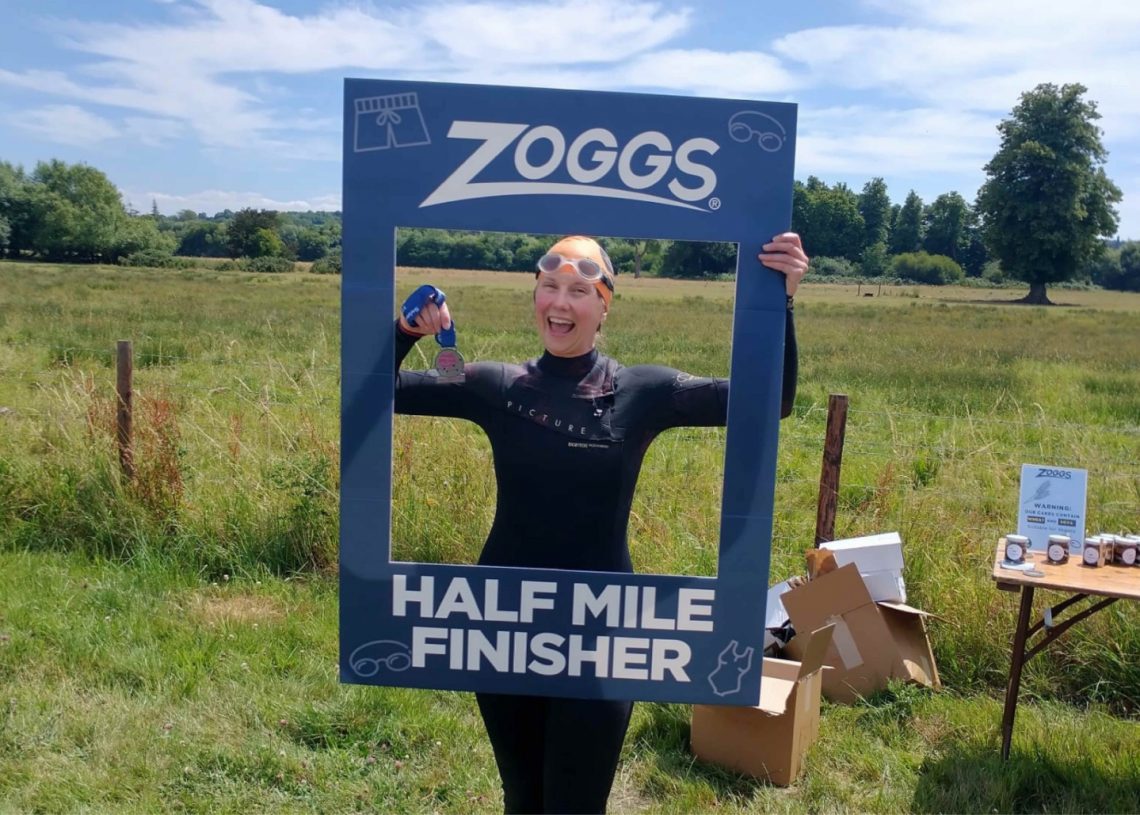 Phoebe first started river swimming when pregnant during the first lockdown. “All the pools were closed and the Aquanatal classes cancelled,” she explains. “I would swim in the Thames, at a spot between two locks where the boat traffic was lower. If you might remember, there was a heatwave and I was desperate to cool off and feel weightless. From that point on, I was hooked.”

Phoebe, who is an award-winning travel writer, presenter and host of the ‘Wander Woman Podcast’, has always had a passion for adventure. Her enthusiasm for sleeping wild – think caves and mountain tops – has taken her on solo adventures around the world, from Everest Base Camp to bedding down inside glaciers in Svalbard. But over the past couple of years, wild swimming has become a new way for her to explore her environment.

“I’m more of a potterer; a water explorer,” she says. “I love nothing better than to lie on my back in the river, looking at the sky and feeling at one with it all. So the Henley Swim Festival was interesting, because I’d never done anything like this before.”

Prior to her half-mile swim at Henley, Phoebe had never raced or counted her distance. For her, open water swimming is more about connecting with nature on a duck’s eye level. “As somebody who loves being outdoors, I got into swimming for the nature aspect of it. It’s the fact that you can be sculling along on your back and a moorhen or coot might swim right up to you. Where I swim on the Thames, there are lots of common terns that dive into the water beside you. They don’t seem to see me, it’s as if I’m part of it all.”

The game changer, which helped her to push her swimming to new lengths, was getting used to swimming in a wetsuit. “It allowed me to stay in the water and feel more comfortable,” she says. Nevertheless, Phoebe had never knowingly swum a half mile, and she admits she found the idea daunting.

Fortunately, Outdoor Swimmer founder Simon Griffiths was at the event to give Phoebe some pre-swim tips and put her at ease. “He told me how competitive swimmers might complete the half mile in 22 minutes, while others might take over an hour and chat the whole way. I thought: ‘Well, I’m definitely in that camp’.”

“He also said to consider sighting if doing front crawl, as there aren’t lanes like in a pool, so swimmers have a tendency to veer off to one side – often to the right. To let go of any pressure, to relax and take my time.”

“Henley Swim is a great entry-level event as there’s a course to follow, and wardens dotted along the riverbank the whole way to check you’re OK. Even though it’s warm, I wore a wetsuit. As Simon says: ‘It’s not about being hardy, it’s about being comfortable’.”

Phoebe completed the swim in 44 minutes, her partner and toddler son trotting along on the towpath beside her. While the competitive swimmer’s dashed past, Phoebe was happy to keep to her own pace. “There were damselflies flying by, and I got to check out the reed systems along the river bank,” she says.

What began as a solo activity during lockdown, now has a new dimension. “Everyone at the event was so friendly, and I think that’s what it’s all about – there’s a social aspect to outdoor swimming that I hadn’t considered before.”

The beautiful weather added to an already relaxed and sociable atmosphere “I found that when I was seeking shade waiting for the event to start, I got chatting to lots of people about how they got into open water swimming. How not everyone was into cold water right away, and had started in the summer like I had. I realised that many other people were here simply to enjoy the river life, rather than sprint to the finish, and that surprised me.”

Find out more about The Outdoor Swimming Henley Swim Festival or pick up everything you need for your first swim event at the Outdoor Swimmer Shop. You can also follow Phoebe’s adventures via her ‘Wander Woman Podcast’.

More on the power of pacing