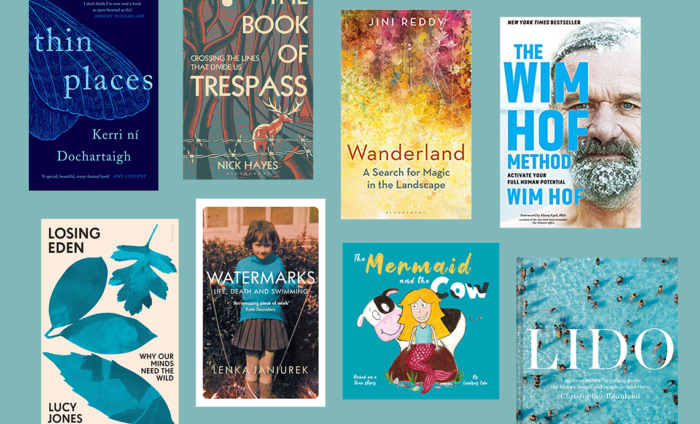 This year has been, well you know how it has been, we’re not going to add anything new to the commentary and clichés, but it has brought us some beautiful and brilliant new books. You may find yourself with more time this festive period as the pandemic forces us to slow down and simplify the next few weeks. Here is a list of our favourite books this year, why not order a copy or two from your local independent bookshop.

As an outdoor swimmer you are probably acutely aware of how spending time out in the natural environment makes you feel good, but have you ever wondered why? Do you put it down to fresh air, natural daylight and exercise induced endorphins? Or have you ever considered negative ions or Attention Restoration Theory? Author Lucy Jones had become curious about how nature affected how she felt and started on a personal journey to discover why. It quickly became clear that she had stumbled into a fertile field of science and multiple scientific disciplines attempting to measure, explore and investigate why contact with nature benefits human health. Losing Eden uncovers a variety of research.

Lenka taught herself to swim. She was aged ten and still hadn’t learnt to swim. She hated the swimming baths, the echo, the chlorine and all the people. So, one summer, soon after her mother’s death and her had father remarried, she decided to teach herself in a pool shaped like a grand piano in the Oxfordshire countryside. This book is a memoir, a story about family, relationships and the solace of swimming. Each chapter is water related, from the red washing-up bowl to a radiator. The book is about a quest to find yourself in nature rather than separate and honouring water.

3. Wanderland: A Search for Magic in the Landscape by Jini Reddy

This book follows Jini around the UK on her pursuit of the Other and connection to the natural world. Following instincts, stories and crumbs of information she collects like treasure, Jini explores the landscape and meets people along her way. One of the early chapters describes how she finds out about an illustrated map that leads to a secret, lost spring. I was instantly captivated in the magic and idea of plunging into a hidden spring with magical waters. Shortlisted for the 2020 Wainwright Prize, celebrating the best in nature writing, Jini’s book stands out from the other nature books listed, perhaps because of the spiritual element.

4. Lido: A dip into outdoor swimming pools: the history, design and people behind them by Chris Beanland

This book is the kind of visually stimulating and compulsive interest book that you don’t want in your house when you can’t swim or visit a cool lido on a hot day. It is beautiful. It taps into the ritual of swimming, explores why we swim, the social and philosophical aspects as well as history and architecture. From London lido favs like Parliament Hill and Brockwell, to the world’s biggest swimming pool in Chile, the book guides you through the evolution of pools and impressive design. There are also splashes of familiar faces with interviews from authors Libby Page and Joe Minihane, Architect and Thames Baths Co-founder Chris Romer-Lee and Photographer Madeleine Waller. But the common theme throughout is where do we like to swim and why.

5. The Book of Trespass: Crossing the Lines that Divide Us by Nick Hayes

The majority of the English countryside is out of bounds for most of the population, 92% of the countryside and 97% of rivers are off limits to the public. In all but one tenth of the English landscape, to wander off the footpath, to swim in a river and to explore the countryside, can leave us branded a trespasser and banished from the land. This book takes us on a journey over the walls of England and into rivers, woodland, lakes and meadows that are blocked from public access. Along with his book Nick is growing a network of ramblers, wild swimmers, paddle-boarders, kayakers, authors, artists and activists. He has launched a campaign with his mate, author and environmental campaigner Guy Shrubsole to stop the criminalisation of trespass and to extend the Countryside & Rights of Way (CRoW) Act in England so that millions more people can have easy access to open space, and the physical, mental and spiritual health benefits that it brings.

6. The Wim Hof Method: Activate Your Potential, Transcend Your Limits by Wim Hof

Famously known worldwide as The Iceman, Wim is a Dutch extreme athlete known for breaking a number of records related to cold exposure. He has accomplished extraordinary feats of human endurance including swimming underneath ice for 66 meters, climbing Mount Kilimanjaro in shorts, running a half marathon above the Arctic Circle barefoot, and standing in a container while covered with ice cubes for more than 112 minutes. He has developed The Wim Hof Method which has featured in media across the world that promises to give you more energy, less stress and a stronger immune system. In this new book Wim shares his life story and breaks down the practice into three simple pillars.

7. The Mermaid and the Cow by Lindsey Cole

The Mermaid and the Cow is a fun children’s (3-8 years) adventure book, based on a true story, which inspires readers to help save our mermaids and their friends from plastic pollution. In 2018, Lindsey wanted to do something about the plastic pandemic after cutting her hand on a small piece whilst freediving in Indonesia. So she swam the length of the River Thames as a mermaid to highlight how we’re all choking wildlife in our waterways with plastic, and rescued a cow along the way. A percentage of proceeds from the book goes towards We Swim Wild’s essential microplastics research in Britain’s 15 national parks.

I had never heard the term, thin places – or áitenna tanai, coal áit – until I read Kerri’s new book titled, Thin Places and now I can’t stop thinking about it. It is such a beautiful description for a feeling I have experienced, often in water and always when outdoors in the natural world. Like Kerri, I was born in the early eighties, but our experiences growing up were vastly different. While I remember hearing, reading and seeing news about the Troubles in Northern Ireland, Kerri lived through them. Born in Derry-Londonderry at the height of the conflict to a Catholic mother and Protestant father, her life has been deeply affected by poverty, loss and trauma. Thin Places, her debut, is a mix of memoir, social history and nature writing. It explores how nature and swimming kept her sane and helped her heal. But it is also an education on what it was like to live through such a violent time and how Brexit is once again allowing divisions to form.

9. Game On by Sue Anstiss (Published by Unbound TBC)

Sue Anstiss loves sport. She has been lucky enough to work in the sports sector for the last 30 years, but as those years have passed, she’s become increasingly concerned about the massive disparity for women. This book will follow Sue’s journey as she talks to high profile Olympic and Paralympic champions, sports broadcasters, journalists, sports scientists, CEOs, officials and sponsors, and shares her own experiences, to investigate why change has taken so long and how we can ensure that the recent positive revolution in women’s sport continues. It will uncover why women have been excluded from the world of sport for centuries, and why we should be concerned about it, as well as exploring why things are changing now and what’s made global leaders, brands and the media finally wake up to the potential for women’s sport.

Support this book to be published…

10. The Green Hill by Sophie Pierce

In 2017, Sophie Pierce’s life changed forever when her 20-year-old son Felix died suddenly and unexpectedly. Thrown into a new world of loss, she had to find a way to keep on living. In a series of letters to her son – composed during walks and swims taken close to his grave on The Green Hill in Devon – Sophie learns how to live in the landscape of sudden loss, navigating the weather and tides of grief. In the surroundings of Dartmoor and the South Devon coast she finds ways to continue the bond with Felix, both in her mind and with physical activity; actively mourning, rather than grieving. Sophie Pierce is a writer and broadcaster who lives on the edge of Dartmoor in Devon, where she loves to swim in rivers, lakes and the sea. For many years she worked for the BBC as a radio and TV reporter. She is the co-author, with Matt Newbury, of Beyond the Beach: the secret wild swims of Torbay; Wild Swimming Walks Dartmoor and South Devon; and Wild Swimming Walks Cornwall (also to be published in 2021)

You can fund the book project through Unbound by pre-ordering a copy now: https://unbound.com/books/thegreenhill/

Why it’s OK to make a living from swimming