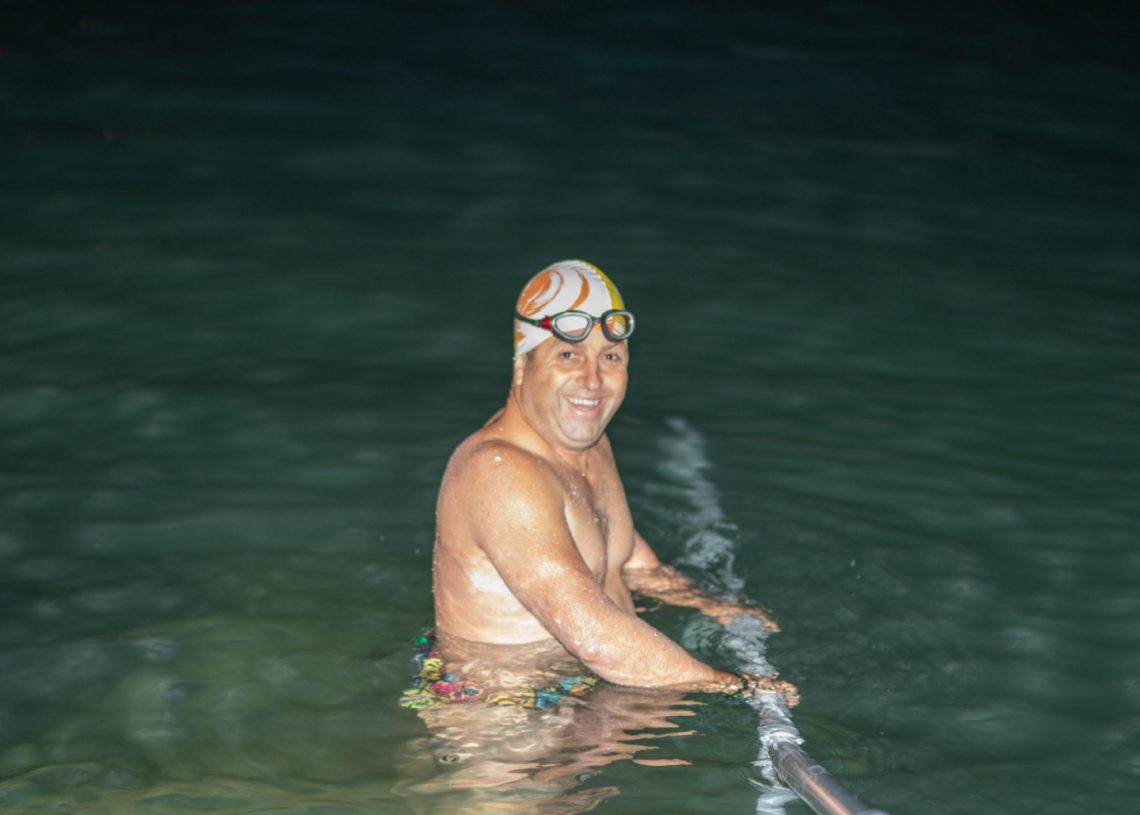 Earlier this year, Phil Warren set himself the challenge of swimming all four crossings of the Bristol Channel in one swim season. Not only that, he would attempt to become the first breaststroke swimmer to do so – something that no one had attempted before.

This wasn’t Phil’s first attempt at swimming the Bristol Channel. In 2020, he had set out with three friends – Anthony Baxter, Mike Wood and Mark Reed (aka The Henley River Rats) – in an attempt to swim the longest route, Ilfracombe to Swansea, as a relay team. If they had succeeded, they would have been the first team in history to complete the route.

Unfortunately, at almost the halfway mark, one of the team was becoming more and more unwell and the decision was made to abandon the swim on safety grounds.

“It never sat well with me that we did not complete the swim, and after discussion with the guys I decided to attempt the swim solo,” says Phil. “Subsequently, I ended up signing up for all four swims. If you are going to do it then you might as well go big!”

The four ‘official’ crossings of the Bristol Channel are: Penarth to Weston-super-Mare (8 miles), Penarth to Clevedon (11 miles), Glenthorne to Porthcawl (16 miles) and Ilfracombe to Swansea (24 Miles). Phil started his challenge this June, with the Penarth to Weston route.

Swim one: Penarth to Weston (aka “The Bitch”)

“We had been watching the sea temperature for months and had everything crossed that they would start to rise. We had a plan B; if the water was under 14 degrees then I would wear a wetsuit. The swim would not count, but it would still be a successful crossing as part of my personal challenge. Eventually, the water temperature started to increase and made it to 15.5 degrees. Wetsuit left at home, the swim was on!”

On the morning of the swim, Phil and his crew found themselves moored next to the harbour survey boat and asked them to calibrate their equipment. “Bad mistake! There was no going back now. Our equipment read 14.2 degrees, the Channel survey boat said 10.2 degrees. But I was here, my wetsuit was at home. It was going to be a rough cold ride.”

The first hours of the swim passed, and the first feeds went well. But the tide and swell was becoming stronger. At the third hour feed, Phil vomited and was ill for the next three or more hours. “The swell was increasing and swimming was becoming harder; I felt like I was fighting the tide constantly. I ended up swimming 12.5 miles and for seven and a half hours. Unfortunately, I was swept past the land by five knot tides, missing my landing point by a mere 500 meters. It was gutting to say the least, but reflecting on the swim I learnt so much in a short space of time.”

In July, Phil attempted the second swim, Penarth to Clevedon. “After the disappointment of the first swim, I was determined to finish swim number two, I had been training hard, I changed feed strategies, and I was in the zone to smash the swim,” says Phil.

Twenty-six members of the Penarth Dawnstalkers, a local swim club, came down to the beach to send him off. Conditions were calm at first, and the water was a comparatively balmy 17 degrees. Phil soon got into a rhythm.

“The first two feeds went well and I was powering across,” he said. “Then the swell started to increase and at hour three, I fed and 30 seconds later I was projectile vomiting once again.”

Although he was sick for another three hours, Phil ploughed on determined to finish. But the swell was increasing, and he now faced wind over tide. His support boat moved to his left side to protect him from the wind and swell.

“The downside was that I couldn’t see my finishing point, but trusting my pilot and crew I just kept swimming. Eventually Clevedon Pier was in view – I was there!”

Seven hours and four minutes after he entered the water, Phil landed on Clevedon slipway, met by his mum, daughter and one of the River Rats, Mark Reed. He had become the 11th person to attempt the crossing, the 9th person to complete it and the first to cross the Bristol Channel swimming breaststroke.

Phil’s third swim, a 16-mile route between Glenthorne to Porthcawl, was unfortunately postponed due to the weather. “Unfortunately there was not another slot to attempt the swim this season. But on the upside, that meant more time to rest, recover and train for the last one.”

Swim four: Ilfracombe to Swansea (aka “The Monster”)

Phil met his pilot boat at 8pm on Monday 19 September at Swansea harbour, before heading across the channel to Ilfracombe. “When I arrived, we swapped to the main pilot boat, sorted the kit, applied anti-jellyfish cream, suncream (even though it was 10pm), ocean lube and grease, then left the boat at 10.35pm and headed to the harbour slipway.”

“The hooter sounded at 10.41pm. I was off, swimming into pitch black, out of the harbour and powering towards the Welsh coastline. I felt so apprehensive about the night swim part, not knowing what was out there. But as soon as I was in pitch black, I saw streams of plankton in a vast array of colours, which was incredible and strangely comforting – until I got stung on the cheek by a jellyfish about an hour in. The joys of sea swimming!”

Phil swam from feed to feed, then around eight hours later the sun began to rise. “I was sure glad of the warmth, and it was one hell of a sunrise. Simply beautiful and a huge boost knowing the night swim was over. Better still, time wise I would be around half way through and I had not yet been sick!”

Although Phil can’t remember many details from the next eight hours, there was one incredible moment when he was joined by a pod of dolphins that swam with him for 10 minutes.

“The coast was getting closer, very slowly but definitely closer. I had one of my crew swim alongside for a bit, which was a massive boost for this last part of the swim. The sun was setting, and as I swam into the dark it just got harder and harder. I had zero energy left in the tank.”

“Suddenly, I could hear waves crashing on the rocks and I realised I was there. What a relief!” On his second attempt, Phil managed to stand. “I stood with arms in the air. The hooter sounded to signal the end of the swim. Twenty one hours and 50 minutes of constant breaststroke. One sunset, one sunrise. I had started in darkness and ended in darkness. I became the fourth person to complete this swim and the first ever with breaststroke.”

Back on the boat, Phil’s crew decided he needed help, so they called an ambulance. “I was blue-lighted to hospital to be monitored and tested for a further eight hours. I didn’t care; I was in good hands and I was a Channel swimmer!”

To date, Phil has raised over £5,500 for mental health charity Mind. “I have suffered from mental ill health and still do. I now manage it through medication, sport and open water swimming,” he said. “Mind does such a fantastic job, and has been on the end of a phone for me, which is why I chose them as my charity. All my swims have been self funded so every penny has gone to the charity.” You can donate via his Just Giving page. Read more readers’ swims here.