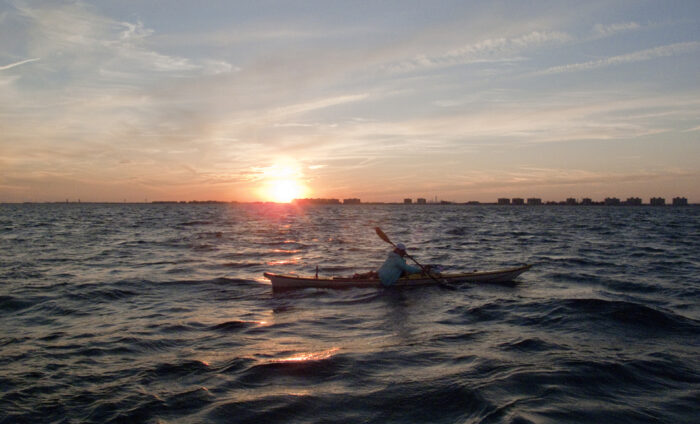 Last August, Patricia Sener was amazed to watch humpback whales feeding and playing within sight of the Empire State Building. But ten years ago even the idea of whale watching cruises was laughable – the New York Bight had been New York’s dumping ground for hundreds of years. It was blighted by spoils, sewage, acid waste, wood incineration, construction rubble, incinerated toxic waste and industrial waste. That all changed a decade ago when organisations such as Clean Ocean Action succeeded in getting marine dumping banned from the Bight. Although still threatened by pollution and the contamination after-effects of centuries of waste, the New York Bight today is host to not only increasing numbers of humpback whales, but a rich and varied marine life.

Inspired by the sight of whales frolicking so close to New York City, Patricia committed herself to an historic and unprecedented swim to publicise the regeneration of the Bight and spread the message that good conservation policies can make an enormous positive impact on marine life in a short period of time. The 17-mile crossing between Sandy Hook and Long Island across the New York Bight had never been attempted before. It also looked like a pretty amazing place to swim.

Fortunately, Patricia is an experienced marathon swimmer. A founder member and executive director of Coney Island Brighton Beach Open Water Swimmers (CIBBOWS), she also made the first double crossing of the Beagle Channel from Chile to Argentina and back in 2010 – 38F [3 degrees Celsius], 3 miles, with two other CIBBOWSsers.

On 22 July Patricia entered the water at North Beach at Sandy Hook. More than 11 hours later she reached Long Island. We spoke to Patricia after her successful crossing of the New York Bight.

I not only wanted to swim because it was beautiful, clean, and wild, but I wanted everyone to know how special this area is, and why everyone should be invested in protecting it. Beyond that, I also recognised that we have our own ‘English Channel’ right in our backyard! This is wild, open ocean – there are whales, dolphin, porpoises, turtles, critters of all kinds! You’ve got tankers to tangle with, tricky currents, water conditions of all sorts. This is exactly the kind of swim my community travels all over the world to do – why not do it in our own backyard?

We crossed three shipping channels, including the Ambrose, the busiest shipping channel in the US (if not the world). I had to tread to wait for a tug towing a huge barge before I could cross, and then hustle before the next one came. We have had some sightings of Portuguese man o’ wars, along with our regular red lion jellyfish. Also, the area is suspected to be a breeding ground for great whites. There are large fish of all kinds coming to feed in the Bight.

thank you Patricia for bringing me out here – it's truly amazing

Rondi (my navigator) and I had been looking at current models for about 10 months, but she found a favourable current rather last minute. I had just finished training for Stage 4 of 8 Bridges in mid June – 15 miles, so I felt fairly comfortable in taking this on. I do think on some level years of marathon swimming has a cumulative effect on your body. In hindsight, I wish I had more opportunity to prepare, I think I could have been faster. I reached out to Clean Ocean Action, put together a crew a fundraiser for their ‘Clean Ocean Zone’ initiative in about a week. Luckily, because I am the executive director of CIBBOWS, I have a good track record with the Coast Guard, and they fast-tracked my permit and supported my swim.

About two hours into the swim I began to taste the baitfish. I popped my head up to ask the captain, and he confirmed we were in whale country. Soon after my crew spotted a whale breaching about 400 yards from the boat. It was nice he came by to wish me well on my journey! At one point my kayaker turned to me and said “thank you Patricia for bringing me out here – it’s truly amazing”. Which is exactly how I felt when I first voyaged here a year ago.

The swim took a lot longer than expected. We had projected seven hours, but I ended up swimming into the night, for a little over 11 hours. My longest swim to date. I was in a massive amount of shoulder pain at the end, and I was cold. By the time we finished and got back to the dock, it was past midnight.

The water was very rough, there was a lot of wave and chop, and my shoulders got pretty beat up. But I had so many fans and supporters following my swim, I just could not quit. I didn’t realise I was at the beach until I got hit by a wave and my kayaker gently told me to stand up. I was never so happy to feel dry sand beneath my feet! I am actually extremely proud of myself and this swim. It’s incredibly powerful to be able to persevere past what you thought was possible. I am so grateful I was able to do what I set out to do – bring attention to the importance of keeping our backyard ocean clean.

My next marathon? I think every marathoner hates that question. Ask me when the pain in my shoulders subsides and I start slacking off at the pool. Then it will be time to plan the next big adventure.