As well as an opportunity to do something I really enjoy doing (i.e. long distance swims outdoors), I find that almost every open water swim is a chance to try something different and learn. I’ve just got back from Oceanman Turkey, a 10km sea swim in Alanya, on the Turkish Riviera. It was an out and back course around a peninsula with a compulsory water exit at the half-way point. The water temperature was around 20 degrees Celsius and the air creeping up towards 30. Wetsuits were optional. We’ll have a full event report in a future issue of Outdoor Swimmer magazine but meanwhile, here are a few observations:

Whether or not to travel with a wetsuit

While I contemplated travelling to Turkey without a wetsuit to save weight, I was glad I had it. The water was colder than I expected and colder than usual for the time of year (lesson: be prepared and keep your options open).

Oceanman Turkey started on the beach, about 10m from the shore. I was surprised, and caught out, by how quickly the front pack ran to the water, which meant I ended up starting further back than I wanted (lesson: run faster).

Once in the water, it was shallow for a long stretch – too shallow for swimming but too deep to wade quickly. The quickest way to move was to jump off the bottom into a shallow dive and keep repeating until it was quicker to swim. The only problem for me was that these repeated dives dislodged my swimming cap and I had to stop to put it back on (lesson: double check your hat is secure before you start swimming).

My usual strategy in a race is to start steady and try to increase speed later. I think many people start too fast and suffer for it later. However, one advantage of starting fast is you get near the front of the pack where you have a better idea what is going on and get a chance to draft off the race leaders. As an experiment, I tried starting faster than usual and found myself in a good position near the front. However, I did not quite swim fast enough to stay with the leaders. I later learned that some of those on the front pack slowed down and I finished only a few minutes behind them. Would I have been able to beat them if I had tried even harder at the start and stayed with them for longer or would I have blown up? (Lesson: don’t be afraid to try different start strategies).

In a longer race, there’s a trade-off between the time you lose by stopping to eat and drink and what you might lose in speed by depleting your energy stores. In Alanya, I had two gels and a cup of water at the half-way point when we exited the water briefly. Until that point, I had been swimming shoulder to shoulder with another swimmer who decided not to eat anything but head straight back into the water, getting about 20 to 30m ahead. However, I soon caught up again and overtook, finishing a couple of minutes ahead, which I’m sure was due to the extra energy I had from the gels (lesson: make sure you eat).

I made a navigation error in the race and had to turn back on a section of the course, thereby adding unwanted distance to my swim. Someone on one of the support boats noted that I had reacted very calmly to finding out I’d gone wrong, which is how it should be. There’s no point wasting energy during a swim (lesson: keep calm and keep swimming). 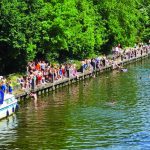 Drowning Prevention Week – How You Can Help

Common shoulder injuries for swimmers – and how to avoid them