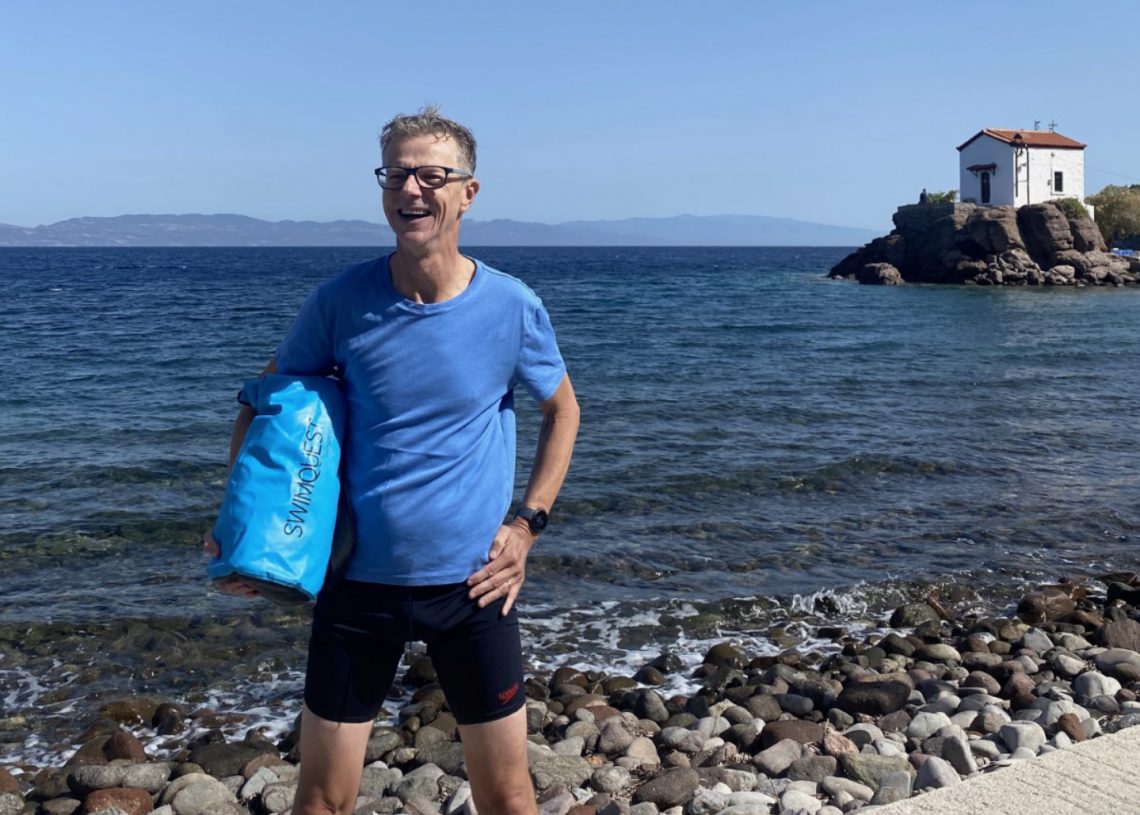 On 1 October 2022, Jim McAuliffe swam from the lighthouse at Korakas to the fishing village of Skala Sikamineas on the north coast of Lesvos, Greece, to raise money for refugees fleeing civil war and persecution.

In November 2018, Jim McAuliffe spent a month volunteering with a small charity called Lighthouse Relief on the north coast of Lesvos, Greece.

Lesvos had been at the forefront of the refugee crisis in 2015 and 2016 when thousands of refugees – mainly fleeing civil war and persecution in Syria – were arriving every day, making the relatively short but dangerous crossing from Turkey in rubber dinghies.

“Although numbers were much reduced by 2018, there was still work to be done,” said Jim. “Round the clock boat spotting operations, co-ordinating with the Greek authorities, helping in the small camp in the fishing village of Skala Sikamineas and keeping the local beaches clear of debris.” In 2019, he started to work formally with the charity, and has done ever since.

His charity swim this October – a journey of around 6km between the lighthouse at Korakas (where many of the refugee boats land) to the fishing village of Skala Sikamineas on the north coast of Lesvos, Greece – was inspired by the heroism of two sisters fleeing the war in Syria.

In 2015 Yusra and Sarah Mardini attempted the crossing from Turkey to Greece along with 18 others in a small dinghy. “When the engine failed, Yusra and Sarah jumped into the sea and swam for three hours, pulling the dinghy to safety on the north shore of Lesvos. Yusra went on to compete in the 2016 and 2020 Olympics, and now lives in Germany, while Sarah returned to Lesvos as a humanitarian aid worker. Their story is the subject of a Netflix film called The Swimmers, which is released next month.”

Out of his comfort zone

The swim took Jim a little under two hours in temperatures around 20-21ºC. “Obviously that temperature might not be a problem for hardy open water swimmers, I am fairly skinny and feel the cold,” Jim told us. “Luckily I’d taken a wetsuit with me, but as I hadn’t done any training in a wetsuit it took me at least half an hour to get used to it, which didn’t help my initial anxiety levels!”

“I had multiple other anxieties: jellyfish, cramp, my shoulder, the weather, my general fitness levels! But most of all, I was very much out of my comfort zone and attempting something that was significantly more challenging than I’d ever done before. Also, because I was raising money for charity, I had to be very public about the swim, and I was absolutely dreading the prospect of potentially telling my sponsors that I had failed. So, the psychological issues were much more difficult to overcome than the physical ones.”

Jim anticipated that the first few kilometres would be mentally the toughest, and this proved to be the case. “It took me ages to get my breathing right, and the novelty of swimming in a wetsuit made it worse.”

Jim had two techniques to combat the demons. “Firstly, I just focused on my stroke and tried to banish every other thought from my head. And, when I found the doubts and fears filtering in, I thought about an amazing family member who is fighting leukaemia and reminded myself how brave she is. That was very inspiring.”

Jim says he is not a natural swimmer. However, 10 years ago after a knee injury reduced the amount of running and cycling he could do, he took to swimming as an alternative way to maintain his fitness. It was only a couple of years ago that his breathing “clicked” and swimming became more of a pleasure and less of an effort. “My technique is still ropey, and I am definitely not super fit, but I know I’m on the right track,” he told us.

“There were three things I needed to do to prepare myself for the swim,” said Jim. “Firstly, to overcome my fear of sea swimming and get used to swimming a reasonable distance in the open sea. Secondly, I have a long-running shoulder injury that flares up if I overdid things, so I needed to prepare for that. Thirdly, I obviously needed to be reasonably fit!”

With three years to prepare, Jim was able to approach things methodically. “I went on a few holidays with Swimquest, which were invaluable. Especially the most recent trip where I was able to gradually get accustomed to swimming 2km-3km in the open sea, in a safe environment.”

“To manage my shoulder, I had a great physio and tried to follow his exercise regime as closely as possible. It needed a lot of patience, but I stuck with it. With fitness, I soon realised there were no shortcuts, especially as I’m now the grand old age of 60!”

“I had a simple routine involving two or three visits to the local pool every week, and a couple of HIIT sessions at home. I gradually ramped up the distances, so that in the final month I was doing 2km or 2.5km every time I went to the pool. Ideally I would have swum a bit further, but I’m rather slow, and to be honest doing 100+ lengths in the pool can be a bit tedious!”

The swim, which took place in breezy but relatively calm conditions, almost didn’t go ahead as planned. “The day before the swim, one of the guys who had helped organise everything rang me to tell me there was a problem. It turned out that we needed to get permission from the Hellenic Coast Guard to do the swim.”

“My immediate thought was that classic Greek bureaucracy was going to cause the whole thing to be abandoned. However, after further consultation, and a trip to see a very jovial coast guard in the nearest town, I signed a rather forbidding document which, as far as I could tell, basically gave the coast guard the right not to rescue me if I got in trouble! After that, they were very happy to wish me luck and allow the swim to proceed.”

Jim has so far raised £3,215 of his £5,200 goal. Lighthouse Relief’s work is now focussed on providing psychosocial support in a refugee camp north of Athens, as well as working on the streets of Athens to provide food and other necessities to the homeless.

“The refugee crisis in Greece and the Eastern Aegean has largely disappeared from our TV screens, but there is still much to be done. Hopefully my swim will have helped raise awareness of these issues, and also provided some much needed funds for Lighthouse’s vital work.”

Lighthouse Relief was formed in 2015 by a small group of volunteers working in Skala Sikamineas, a tiny fishing village on the north-east coast of Lesvos, where thousands of refugees were arriving every day in rubber dinghies. The nearby lighthouse at Korakas, which was the location of many landings, inspired the name of the charity. You can still donate to Jim’s campaign on his GlobalGiving page. Read about other inspiring charity swims via our news page. 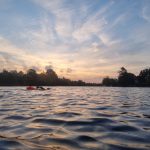