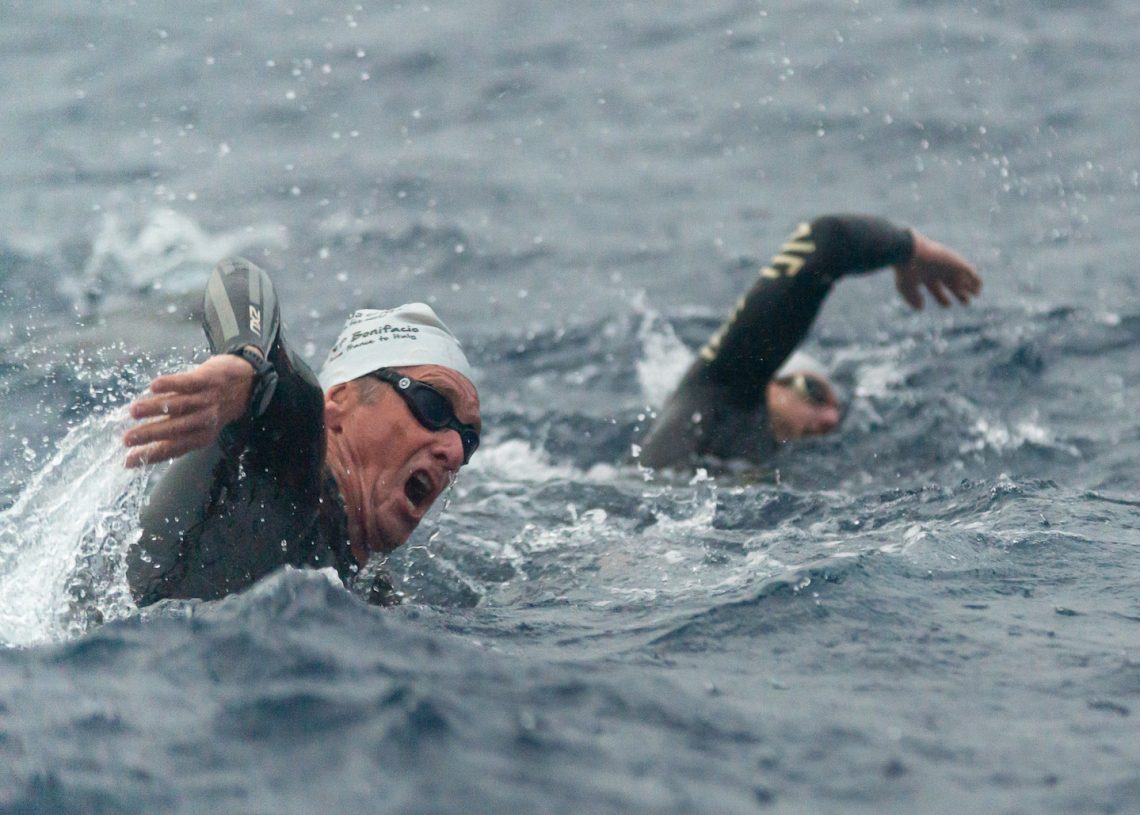 Nigel Downing, aged 71, has become the oldest British swimmer to complete the Bonifacío Strait. The swim took him 4 hours 25 minutes, and has so far has raised more than £6,000 for Mission Aviation Fellowship (MAF), the world’s largest humanitarian airline.

The swim took place on 30 September after a week of Force 8 winds across the Bonifacío Strait between Corsica and Sardinia, which prevented the group of 16 swimmers who travelled to Capo Pertusato on 24 September to attempt the challenge.

Admitting the conditions were incredibly challenging during their time in the water, Nigel feels “utterly relieved” to have completed the difficult route.

At one point during heavy rain, visibility became almost zero, and the team relied on their boatsman Luigi to direct the course. Nigel said: “I had my doubts at times about whether I would even finish – and I personally had a very challenging swim. I had felt so nervous before setting out – I just wanted to complete the distance and make sure all my supporters got their pennies worth.”

Nigel and his team completed the 15.3km challenge in under five hours, which was Nigel’s initial target. He said, “When we finally came into Sardinia I could have wept with joy. Every one of us finished the challenge, and I feel incredibly proud for all the swimmers. It was an absolute honour to swim for such an amazing charity, and I’m deeply grateful for all the incredible support that has come my way. “

Nigel, who lives in Henley, Oxfordshire, has been training for his Bonacio Straít challenge in the River Thames at Wallingford since March 2022.

A former Olympic triathlete, Nigel represented Great Britain for his age group at the 2005 World Championships in Hawaii and has also completed a 30km stretch of the River Thames between Henley and Windsor – his longest open water distance to date. In 2015 he became the oldest man to swim the Strait of Gibraltar, raising £5,500 for the MAF.

The MAF is an aviation charity that responds to natural disasters and provides humanitarian assistance – flying medical supplies, aid workers, relief cargo across the world.