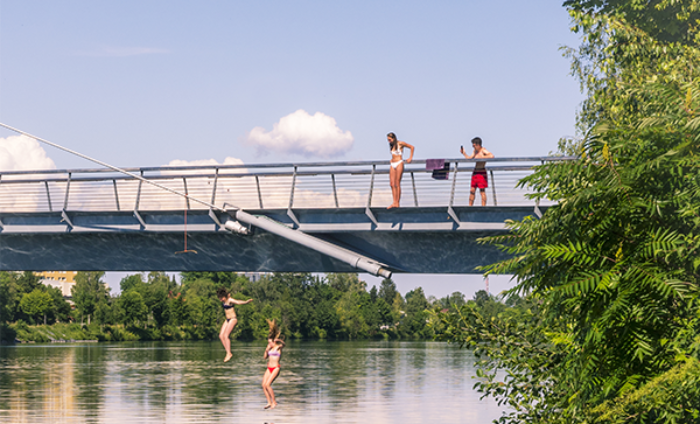 Simon Griffiths suggests putting diving boards at rivers to offer youngsters an alternative to jumping from bridges and lock structures.

On 1 July, my local MP, Sarah Olney, included a paragraph in her daily email update with the headline: “Jumping in the Thames is NOT a safe way to cool off.” The newsletter went on to say the Environment Agency and the Port of London Authority are working hard to educate people to stop jumping in the river or using paddleboards. She added that the local police and fire brigade are “becoming very concerned about the situation, as the currents in the river can be deceptively strong.”

So, naturally, I sent her an email. I agreed with her that mixing swimming with alcohol is a bad idea and that there are, indeed, places in the river where it is dangerous to swim. I went on to point out that river swimming could be done safely if you take the right precautions and ended with the following suggestion:

Instead of telling people not to swim in the Thames, why not instead make it safer for them to do so, show them the best places to swim and provide appropriate safe open water swimming guidance?

In addition, I suggested that instead of sending in the police, the council could employ open water coaches and lifeguards to educate youngsters about safe river swimming and watch over them while doing it. I shared some swimming safety advice and concluded with the following:

The Thames is a wonderful asset for our community. Swimmers should be able to use it as freely as rowers, kayakers and motor cruisers. Rather than the Environment Agency discouraging people from swimming, I’d like to see them doing as much as possible to hold Thames Water and other polluters to account to ensure we have the best possible water quality.

Her reply: “I am not sure it would be wise to encourage more people to swim in the river due to the health and safety risks attached due to the shock of the cold water and of the potential to pick up bugs from the water. Also it would be very tricky to monitor activity and keep people safe from other traffic on the river.”

Given the country’s priorities are, rightly, on dealing with Covid-19, I was pleased to get any sort of response, but I was disappointed (although not surprised) not to receive anything more positive. Still, I do understand the frustration of the emergency services. Clearly, large groups of young people congregating at the river, leaping from lock structures and bridges, and swimming near the weir, is not desirable, either from a social distancing perspective or a river safety one.

However, this happens every year, and every time we have a few hot days. It’s frustrating because there is a safer place to swim less than 500m away. But the youngsters don’t go there. It’s not so fun because there is nothing to jump off. So why not create a dedicated river swimming spot away from the hazards, install diving boards, put up a sign with safety information and on hot days, pay an open water lifeguard to keep watch instead of using up valuable police time to chase the youngsters away? They are going to get in the water anyway, so let’s make it fun and safe for them. Maybe one for the future, once Covid-19 is no longer our most pressing concern.

From ‘View from the water’ – published in the August issue of Outdoor Swimmer.