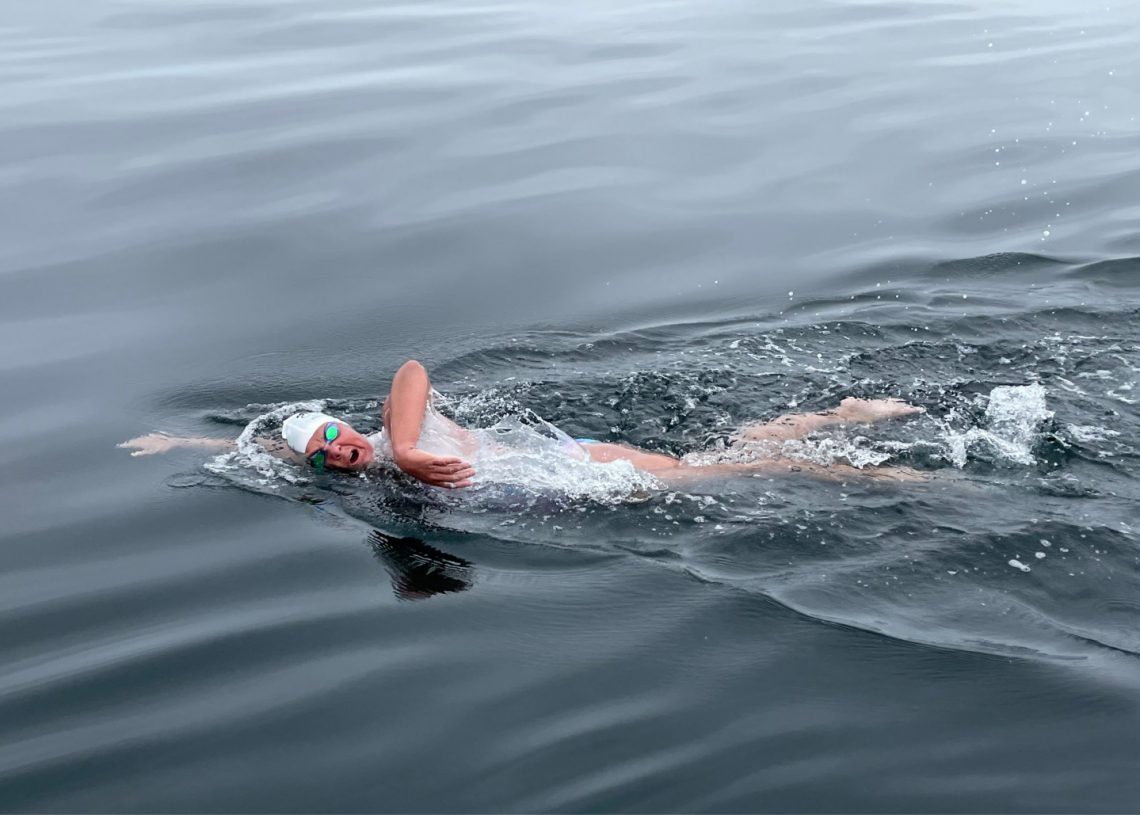 Lion’s mane jellyfish, an enormous spring tide and swimming for her mental health: Siân Clement shares the ups and downs of her journey to swimming the Original Triple Crown

Siân Clement has made history by becoming the first female swimmer to complete the Original Triple Crown – swimming across the English Channel, North Channel and Bristol Channel – in memory of two close friends.

More incredible still, Siân went on to beat the record time set by all of the previous (male) swimmers. Considering that Siân swam the Bristol Channel between Swansea and Ilfracombe – a crossing that was nine miles wider than that swam by any of the previous swimmers – this is an incredible feat.

A remarkable new time for the Original Triple Crown

Back on dry land, Siân spoke to us about the immense challenges behind her remarkable swims.

What inspired you to swim the Original Triple Crown?

When I started marathon swimming I wasn’t planning on doing the Original Triple Crown; I’d never even heard of it. It was my friend, Gethin Jones – the only other person to have swum the Ilfracombe to Swansea Bristol Channel route – who wanted me to complete it by doing the North Channel. I am not ashamed to admit I was scared of the North Channel, mainly due to the lion’s mane jellyfish. I wanted to have done it but wasn’t keen on actually doing it!

Then last September Geth sadly died, and on my next sea swim I realised that I would now have to swim the North Channel. I booked it within an hour of getting out of the sea. Sadly, a few weeks later another friend of mine, Paul O’Dwyer, also died. So I decided I would swim in memory of both of them.

Did the challenge go as expected?

My training did not go to plan. I had quite a few emotional challenges this year and really lost my mojo. I had to fight with myself to even go to training, and I did not manage to do as much as I would have liked. When I got the message to say I could attempt the swim on Sunday 10 July, earlier than my originally planned window, I had to think hard about whether I was ready.

I didn’t tell people, but I had fainted three nights before I got the go ahead during a Zumba class and only had an hour’s sleep the night before. I was still in Wales, so I had to travel to the start in Northern Ireland. Once I made the decision that I would go – you have to take good weather when you can – I mentally switched to focusing on the swim and not doubting myself, or letting any competing worries come into it.

Were there any other unforeseen challenges?

On the day of my North Channel swim, I found that my bather would not stay where it should be, possibly due to the fact that I was wearing more grease compared to my training swims. I lost a lot of time having to repeatedly tuck myself back in. It also meant that I had grease on my hands so could not adjust my goggles the whole way.

For my Bristol Channel swim, because there are no pilots who regularly take swimmers across, I had to plot my own swim and find a pilot and boat. My original pilot, who I had been talking to since January, pulled out 48 hours before I was due to swim and I was already just outside my tide window because of the wind strength. This meant I had to find someone else at short notice and ended up swimming on a big spring tide. Considering that the Bristol Channel has the second largest tidal range in the world, this made a massive difference to my swim plots. I would have given up before I even started my swim had it not been for several very supportive friends.

What were the water conditions like for your North Channel swim?

The water was lovely and calm. I was so lucky with both the weather and the tide times, especially as the start is very rocky and would be tricky to navigate in the dark. I had found it difficult when I recently did a relay swim there and started at dawn; I nearly swam into two big rocks but just managed to see them both in time. Everything just fell into place for my solo.

What were the most challenging aspects of the Original Triple Crown?

The most challenging aspect of my English Channel swim was not understanding the potential currents on the French side. I thought my crew were lying to me and I wasn’t going to be able to finish the swim, because I spent three hours not getting any closer to shore. Physically I was fine, but mentally I was in a dark place. The conditions also meant that chop was coming from all directions. Many times, I turned to breathe and a wave of water hit the back of my throat, making me gag.

For my Bristol Channel swim, the most challenging part was planning the logistics such as plotting the swim, and finding a pilot, boat and crew. The really dense smacks of moon jellyfish – what an apt collective noun – which first appeared at night were something that I had never experienced before or since. My crew had never seen anything like it, either. Apparently, it made the news.

I got multiple stings, but I’m just glad they were moon not compass jellyfish, as the stings were pretty mild. Although it’s definitely something you feel, once you’ve been stung hundreds of times. I also started vomiting constantly, so I had to change my feeding regime to solids.

Finally, for the North Channel swim, the main challenge was the lion’s mane jellies. The difference in size and number since my relay swim 21 days before was phenomenal. At first, I was looking ahead so I could spot them and dodge them, but that caused me lower back pain, so I had to trust my jellyfish spotters on the boat. The main problem with the lion’s mane is how dense and long their tentacles are. The times I was stung the worse, I never ever saw the bell; the tentacles were just too long to swim around.

Even though the North Channel is colder, I have been swimming in Orkney recently and my cold water acclimatisation obviously worked because I didn’t feel cold at all. I didn’t even need my dryrobe afterwards.

What were your most memorable moments?

Without a doubt, my most memorable moment was swimming into Portpatrick harbour at the end of my North Channel swim. I could hear a bell ringing and I assumed it was my team on the boat. But as I stood up, I realised that there were loads of people around the top of the harbour clapping and ringing bells to welcome me. That was a really special and unexpected moment. Several people came to speak to me afterwards, which was just lovely.

My family and friends meeting me at the Mumbles slipway, just after I finished my Bristol Channel swim, was also very memorable. In particular my nephew, who was four at the time, started ‘three cheers!’ for me and gave me a big hug and a kiss.

How did you feel when you finished the final swim?

I felt really touched by my welcome into the port, and really happy that I had managed to complete the swim for Geth and Paul. As I said previously, I never thought that I would swim the North Channel and I just kept saying ‘I did it’, as I don’t think I really believed it.

How do you feel when you’re open water swimming, and why is it important to you?

I love swimming and I always have. I love the sea, too. As soon as I get into the sea, I feel calmer. I particularly like swimming in rough conditions (although calmer seas for the actual challenges are preferable!). I can think about my swimming technique or use it as a kind of active meditation where I clear my mind.

Swimming helps with my mental health; it reduces anxiety and lifts my mood. I use it in the evening after bad experiences at work. I am a doctor so some days can be really challenging, and you can experience things that a lot of people don’t see. The driver for booking my English Channel swim was that I felt like I was only working (which I wasn’t enjoying) and sleeping. I realised that I needed to do something for myself.

Has Guinness World Records confirmed your time and your record attempt?

Not yet. Guinness World Records are still considering the claim. I am the first female and currently the fastest to complete the Original Triple Crown. I didn’t even consider that I may be the fastest, as I swam the Bristol Channel at a far wider point than the others who have completed the challenge. It was only after a conversation with Tom Chapman of the Bristol Channel Swimming Association, that the possibility of being the fastest was brought up so there was a significant delay before contacting Guinness.

Although I am proud to be the fastest, given how popular swimming the Bristol Channel is becoming and that most people will swim a significantly (9 miles) shorter route, I am sure that my record will be broken in the not too distant future. What makes me happy is that I could achieve Geth’s dream of me completing the Original Triple Crown. I am only sorry that it took his death to make me do it.

Is there anything else you’d like to tell us about, which we haven’t asked about?

I have raised money for charity with all three of my swims. As my main reason for doing the swims is a personal challenge, I have never used any of the money raised to pay for elements of the swim, so everything I’ve raised has gone to charity. For this final swim, I chose the Welsh Air Ambulance, as it connected both Geth and Paul and my work.

Also, I could not have done this without the support of so many people. In particular I want to thank my crews on the boat for each swim – you are all heroes to me.

You can still donate to Siân’s Just Giving page. To read more about the personal stories behind swimming challenges, head to our news page.