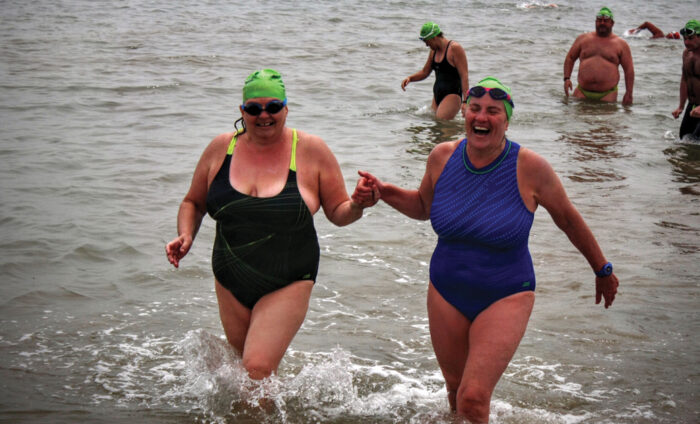 After flippantly agreeing to join a teammate on an English Channel relay swim – organised by Aspire, the UK’s leading spinal injury charity – I have spent the last six months going through the processes and preparations for this challenging event. Having recently returned from the first acclimatisation weekend in Dover, I hope I can provide some advice to any readers considering taking part in future.

The first thing I’d say to anybody tempted to flick past these pages because they don’t think they’re up to the challenge, is don’t let fear about your swimming ability prevent you from taking part. My assumption had been that anybody putting themselves forward for a Channel relay – whereby six team members swim an hour each in rotation until they reach France – must already be an elite swimmer with exceptional endurance. This was emphatically not the case when 50 of the original 200 applicants gathered for the initial assessment day at Aspire’s HQ last November. The ages, abilities and experience of the swimmers at the beginning of the journey are very mixed, with the intention of putting those subsequently selected through their paces via training schedules and acclimatisation weekends in Dover to prepare them for the big day.

The assessment day required only a 400m timed swim which exposed some widely differing abilities – from one who was only comfortable doing breaststroke to another with a head-swaying stroke that looked exhausting over one length of the pool, never mind one hour in the ocean. I swam a steady pace and was surprised to clock the second fastest time at 6:05, while those who were subsequently accepted varied from 5:53 to 10:47, so a wide range and definitely far from elite. However, although coaches and former relay swimmers were on hand to oﬀer advice, it was clear that some swimmers lacked either the potential or the commitment to be taken forward at this stage – after all, in the middle of the Channel your team and your support crew are relying on you.

The aspect that worried me far more than swimming was fundraising. Each team has to raise at least £10,500 (£1,750 per swimmer) before being allowed to set foot on the boat. There is quite rightly no negotiation on this, and at least one bad experience has led to Aspire asking those raising less than their target to stump up the remaining cash themselves.

I made no secret of the fact that my initial motivation for taking part was the swim itself rather than the charity, and they openly recognise that this is the case for many swimmers – several of whom use it as a stepping stone to a solo attempt. I was also painfully aware that having done three big fundraisers in recent years, I was often asking the same people for money, and I felt nervous and embarrassed about doing it again. In an assessment interview I was frank about my concerns and was given a stern but fair reminder about the importance of raising money for the cause, combined with helpful tips on how to do so.

It is worth noting that in addition to the fundraising commitment there is also a less-appreciated personal financial commitment. Any Channel swimmer has to pass a medical assessment which with some shopping around and bartering you can get for £50 (or occasionally even free), but without such efforts could be closer to £500. There are three virtually compulsory acclimatisation weekends in Dover, which for most people would require at least one, but ideally two nights in a hotel plus travel. The day of the swim itself will require the same. On the first weekend swimmers were asked to give another £15 for a swim cap (as if swimmers don’t have enough already!), a Dover Swimmers’ Beach membership and pool entry. Most regular swimmers are used to coughing up plenty of cash for event entries, kit and travel, but if I had one criticism about the experience so far it would be these other relatively hidden costs which can add up and might price-out some less well-off individuals, and it is important for budding relayers to be aware of these expenses before signing up.

If I had begun the assessment day with any apathy towards the significance of the charity’s work or my own small contribution to it, I ended it feeling motivated and inspired to make a difference. We were given a talk by a former triathlete who had been paralysed after being knocked off her bike by a careless driver. She had found Aspire’s support invaluable after this life-changing event, which had necessitated job changes, house moves and getting to grips with the confusing world of benefit entitlements. Looking around the room as she spoke, I noticed several people in tears. It was a stark reminder that a spinal injury can affect anybody regardless of age, fitness or lifestyle, at any point and without warning, and Aspire is there to offer support from day one. I’ll certainly be remembering that whenever I feel cold and tired during our crossing.

Those swimmers selected from the assessment day were grouped into six teams of six – each team named after a fish – chosen roughly on the basis of geography to enable the teams to train together. There is an emphasis on mixing strong experienced swimmers with those less proficient to encourage learning and improvement through teamwork. The aim is inclusion, not record-breaking.

From the moment of selection it is important to engage in regular training. I benefited hugely from already being a member of a masters club, and would highly recommend fellow and future relayers to join one if they haven’t already. However, often masters sessions are geared towards short-distance pool swimmers and it is important to get comfortable with longer distances without the regular breaks offered by coached sets. The type of stroke needed to cope for longer sessions in open water is also very different, tending to focus on a longer reach and more methodical kicking to conserve energy. I spent many hours watching guidance videos online and have booked an underwater video analysis session in an attempt to improve this aspect of my stroke.

Then of course there’s the importance of stepping beyond the comfort of a warm indoor pool and into significantly colder water outdoors. Thankfully there’s now a wealth of opportunities to swim outdoors throughout the year including in lidos (heated and unheated), venues like the Serpentine and a number of lakes. I started by squeezing in a few outdoor lido sessions each week and around Easter I began open water training, in a wetsuit to begin with, then gradually relying on it less.

You can never escape the initial feeling of shock that submerging yourself in cold water gives your body and brain, although it is intriguing to see how people are differently affected and how they deal with it. Nowhere was this more obvious than when the 36 swimmers were asked to enter the 10.8c water in Dover harbour for the first time at the beginning of May. Some opted to get in and get swimming as quickly as possible, others stood nervously on the pebbly beach taking one small step at a time. I was somewhere in between the two extremes – the water felt fine until it reached my knees then got progressively worse – but I was in no doubt that the best method was just to get on with it rather than to hesitate.

I was genuinely surprised at how much the cold water around my chest affected my breathing, or lack of it, and I opted to do a few strokes on my back until it calmed down before turning onto my front and attempting some freestyle. Anybody who has tried putting their face in the water at this temperature knows that the brain-freeze is unimaginable. The extremities of my body and my shoulders in particular also felt incredibly cold.

We swam about 150m to a pole at one side of the beach, during which time almost every particle in my body was telling me to stop and get out, but my stubborn side, combined with the collective sense of bravado, stopped me from doing so. At the pole several swimmers stopped to tread water and check that everybody felt equally awful, before beginning a 1,150m round trip to a distant groyne and back to the beach. This part of the swim felt much more do-able, arguably even enjoyable, as the initial cold sting was substituted by warming pins and needles. From that point on, I told myself that the pain only lasted until the first pole, and this helped me cope with it psychologically.

Over the weekend we did four sea swims of gradually increasing time and distance – the focus was on time spent in the water, with different swimmers covering varying distances in that time. By the fourth swim I was doing 2km and finding it pleasant, although on arriving back at the beach I was advised to get warm quickly because my back was turning blue, a reminder that sometimes we can get carried away and need teammates looking out for us.

In between each swim, we’re taught to get dry and clothed as quickly as possible, which is a real challenge when you have limited dexterity and you’re trying to preserve some dignity. I felt fine for the first few minutes after getting out of the water, but 5-10 minutes later my temperature seemed to drop considerably despite putting on several layers, a hat and gloves. I was still shivering 90 minutes later when we had to go back into the water, a deliberate test of the swimmers’ endurance which will be essential when preparing for their second or third leg of the relay.

I always tend to over-prepare but I was surprised at how important some of those preparations were. A waterproof picnic blanket I’d thrown in the car at the last minute was a godsend on the sharp pebbles, as were some old ‘splasher’ shoes. I thought I was over-compensating by wearing two long-sleeve t-shirts, a hikers’ fleece and a winter coat, but I could have happily worn more. Many swimmers also used dryrobes or sleeping bags, which help with both warmth and changing. I was glad to have opted for tracksuit bottoms which were easy to put on, but next time will take an additional pair of joggers as my legs were surprisingly cold. Jeans or trousers with fiddly zips and buttons should be avoided.

The weekend of sea swims was rounded off by a challenging two-hour training session in the local pool, where teams also competed in nail-biting 6x200m relay races, and a well-deserved dinner at a local restaurant where the beer tasted particularly good.

The journey so far has been both demanding and rewarding, and I’d be lying if I said there weren’t times I question my sanity in signing up. But I’ve surprised myself in many ways so far, feeling a sense of achievement after pushing my boundaries and stepping outside of my comfort zone. Not forgetting that we’re doing this for a vitally important cause, with this year’s teams likely to contribute over £75,000 to Aspire’s support for those experiencing spinal injury. I’m now eager to attend the next two training weekends and can’t wait for the relay itself, currently scheduled for 17 August 2016.

Richard’s team, The Eels, successfully crossed the Channel on 18 August in a time of 14 hours and 42 minutes. 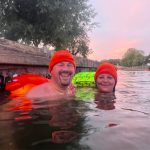