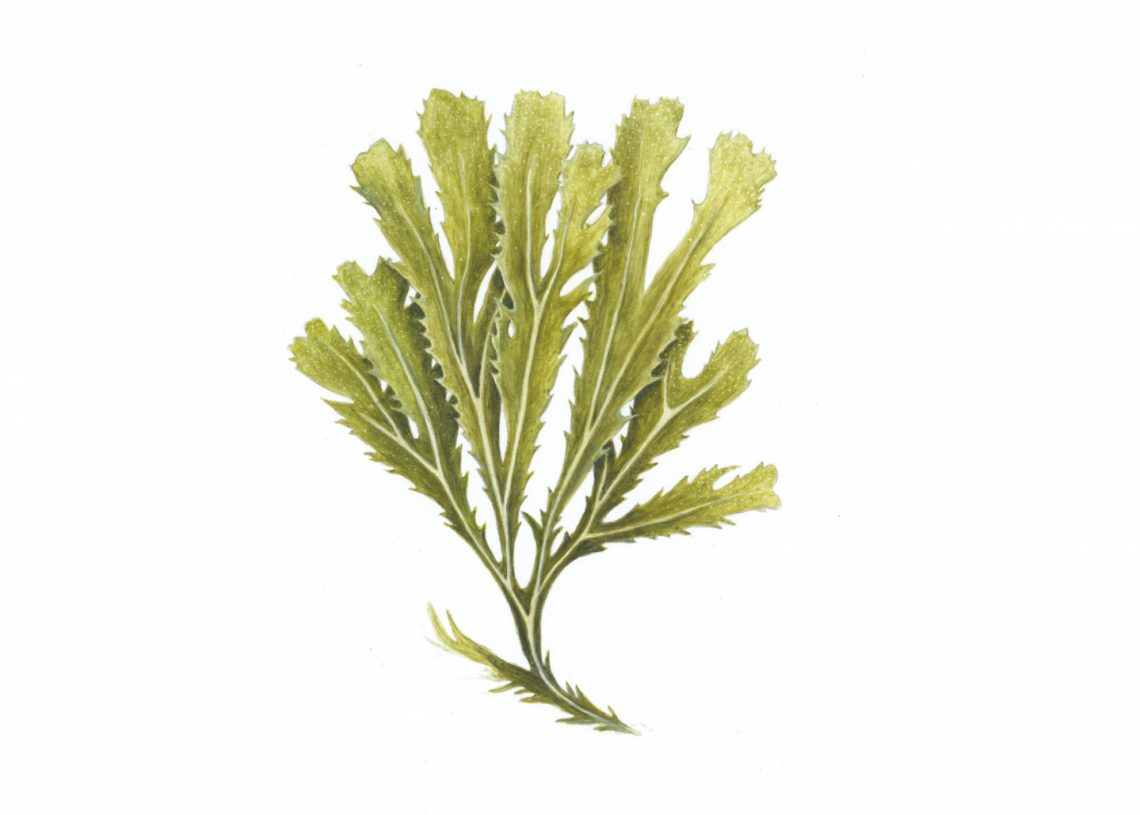 Illustrator Anna Koska reflects on how the “cool embrace” of the sea helped her feel cocooned and safe in her teenage years and throughout her life. Immerse yourself in Cornish winter swimming in this lyrical extract from Anna’s latest book From Coast & Cove: An artist’s year in paint and pen

I’m sitting in my studio, painting a hake while listening to Clair de Lune, by Claude Debussy. It’s a tender, sweeping piece that gently gathers momentum as it flows towards the main refrain, then slowly retreats to deposit the listener back at the beginning. With every swell of the piano I can imagine the sway and shift of water.

And it takes me back to being perhaps 13 years old and feeling more than a little awkward with the changes that were rewiring my body as I moved towards the spring board into adulthood. The ensuing few years were fairly mundane, punctuated by torturous bouts of self loathing and a deep fear of being discovered to be a fairly ghastly pubescent young woman.

We lived in Cornwall, near the coast and with both my parents busy working, they had little time and energy left to take my brother and I to the coast. But every school holiday, aunties and uncles would descend to stay near by, and from then on I would be able to get lifts to the beach. And so, many of my summers were spent armed with a towel and a swimming costume hopping in and out of cars, and in and out of the sea.

As that awkward teenager, brimming with insecurities, I didn’t much like sunbathing. But being in the sea, in her cool embrace, I felt reborn as something far more agile and at ease. I felt cocooned and safe. I would stay in the water for literally hours at a time, just paddling about, diving under, propelling myself beneath the waves; bobbing up to wipe away the curtain of hair and, treading water, stare back at the beach.

The sea was, I think, my lifesaver. It brought me joy.

The pull of the sea

Up until our move here, I’d almost forgotten this nigh on magnetic pull that the sea had for me. Sure, I’ve swam in the sea since then, but with only the briefest window of opportunity that a holiday might offer, and to be honest I didn’t connect with it in the same way.

I’ve always been intrigued by the idea of swimming through the seasons, the bracingly brave and ever so slightly bonkers pursuit of wading in and voluntarily immersing ones body entirely, wearing little more than a few triangles of cloth. And having this stretch of water so tantalisingly close, it felt very much a now or never moment in my life.

So within days of arriving, and midst the mountains of boxes yet to be unpacked, I began to make regular trips to the beach to dip among the salty swell. And every time I swam the breath came easier, no longer the startled, reflexive lock of my diaphragm.

It’s November now, and the sea is colder than the body of water that swayed around these shores in September; any residual heat left over from the hot summer is long gone. But as well as being cooler, the very texture of the water has altered. It has become slower in its shift and roll as it sweeps in towards the shoreline of jostling pebbles that brace themselves for the imminent grab and drag of each white frothing arm swinging in to pull at them.

In just two months we’re down from a balmy 16, to 11 degrees. It’s well documented that the density of water can change dramatically depending on its salinity.

I remember looking at a postcard – eyes on stalks – of a particularly rotund gentleman lying on top of the Dead Sea, a book propped up on the generous dome of his stomach. I also recall trying this out in our bath with very disappointing results.

But there’s also the element of temperature. School physics explained that the cooler it gets the more sluggish and closer together the water molecules become, resulting in it being both ‘thicker’ and more buoyant for swimming. So perhaps if I’d been brave enough, a cold water bath might’ve proven more effective.

This of course would’ve been a very easy experiment, given that when growing up, our little Rayburn only provided enough hot water for one bath, and that luxury often went to my father. Most days he was up long before the birds, to head to his workshop and beaver away at a queue of ancient and damaged furniture… laying veneer, mending a broken chair leg, or reproducing a section of boxwood inlay for a sewing table. He didn’t stop, and the queue of patients never seemed to shrink.

My brother and I would be busy organising our Wheatabix into sections of Stone Henge, when he’d appear at the kitchen door, ruddy faced, wearing a chest of wood shavings, his fingers coated in French polish. Brushing off the worst he’d reach under the sink and pull out a tub of nitromors (paint stripper). Opening this up he’d then proceed to pour it over his hands, and scrub. It would gnaw at his skin, and to manage the pain he’d mutter a stream of mostly incoherent swear words as he worked to remove the stains. The tap would be on full flow, pouring icy water onto his inflamed hands to soothe away the burn. Then all would become calm once more; hands dried, a mug of coffee in hand, face transformed to a wide grin, he’d head upstairs for his bath.

I swam this morning, and the cold sea bit, and each thick furrow seemed to have more momentum and weight to it. Whereas the late summer sea seemed quicker to slice through, this water appeared keen to hinder my progress, with every stretch, cup and pull of an arm feeling more laboured and effortful. No longer silken, today it wore the quality of hessian, abrading my chilled limbs. But it felt real, cleansing, a relief. I suspect the grin I wore was not dissimilar to my father’s.

And now as I listen to this piece of music, and plan tomorrow’s escape to the sea,  it’s occurred to me that I’ve rediscovered a part of my childhood, one that gave me great comfort, and left my mind rested. And in doing so, I’ve reclaimed a piece of me that I’d somehow misplaced.

So here I am again, once more being held aloft by the sea.

This is an extract from Anna Koska’s book ‘From Coast & Cove: An artist’s year in paint and pen‘, published by Harper Collins.

Swimspiration while in isolation: podcasts