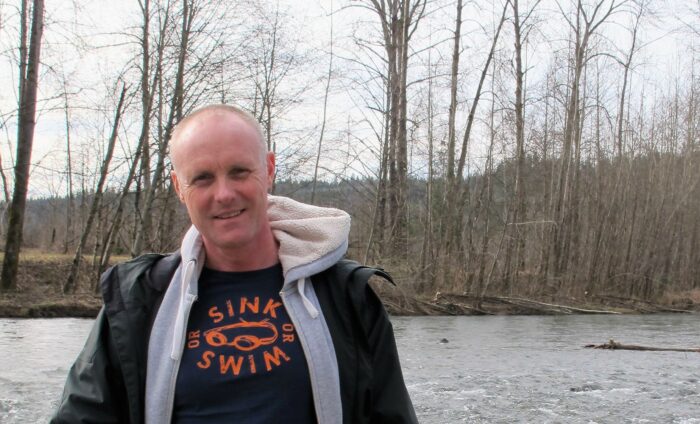 Tom Kean is a co-founder of Selkie Swim Co and a regular masters swimmer. He’s been experimenting with a new breathing technique in freestyle in his training and thinks you should it give it a go too.

I love it when every now and again someone does something new and disrupts the status quo in sport. You’ve all heard of Team Sky with their “marginal gains”. Well, back in 2012 at the London Olympics I swore I could see distance freestyle phenomenon Sun Yang taking double or even triple breaths into and out of his turns, and swapping sides half way down each length to evidently great effect. In swimming terms, this is highly unusual. The minimum we’re taught to breathe in swimming is every two strokes or, if you learn bilateral breathing from the start, every three strokes. Yet, here was a world champion taking a breath every single stroke, at least going into the turns and occasionally in the middle of a lap.

In my formative years in the pool, I was always coached to hold my breath into and out of turns but this felt counter intuitive to me as I spent the next half-length getting my breathing back under control and dispersing the lactate that had built up. Probably “my bad” as some people say today. But these days of course, the underwater phase out of a turn is much more critical than it used to be, so here is the first big compromise I suspect. But how much do we need to re-think our breathing, especially in the open water environment where I also experience similar levels of oxygen debt when racing?

We all know that being able to breathe both sides is a fantastic skill – it balances our stroke, helps us avoid injury and enables an alternative strategy in rough conditions. But personally, I start to feel uncomfortable breathing every three strokes when I’m working hard and quickly revert to norm – breathing to my left. If I have to breath to my right side it is most definitely the slower option.

Inspired by Sun Yang, I decided to try his every-stroke breathing pattern into and out of turns in my pool sessions, and I’m pleased to say that after only a few goes it has become intuitive and compelling in the middle of a hard set. I’ve yet to do it racing, but will give it a go, hopeful in its performance enhancing effect.

So for outdoors, can we all learn something from this? I’d suggest we could: if nothing else to keep our sessions more varied. But I wonder if more breaths is the answer, with a little less guilt (because I still feel guilty when I sneak extra breaths in the pool). If you want a bit more air, try breathing every stroke instead of every other, at least for a couple of breaths (if you try this non-stop you will probably get dizzy). Or experiment with different breathing patterns such as two breaths to one side then immediately switching to the other for two breaths. If you really struggle to breathe to your non-natural side but you want to see what’s going on over there then you could try to squeeze in a quick extra breath rather than doing to lots of three strokes to switch sides and switch back again.

There’s a precedent in open water. If you watch Jarrod Poort’s heroic but ultimately doomed attempt to lead the Olympic swimming marathon from the front you will see that he occasionally breathes every stroke, while his usual pattern is every other stroke.

Have a look at these videos on YouTube, and then have a go yourself.

Jarrod Poort in Rio (it’s hard to spot but watch carefully at about 3:23 in)

“I’m not ‘ready’ for the first time in years”: life as an extreme swimmer unable to swim